On the 2nd of July I was able to get my second day of med/surg orientation in.  I actually enjoyed it.  The other L&D nurse on said, “They are going to make a med/surg nurse out of you after all.”  Ha ha it isn’t that I didn’t like it to begin with, I just LOVE my pregnant laboring mamas.  Last week another nurse had asked me to work her Wednesday and she would work my Sunday so that she could go on a dinner cruise.  I didn’t have anything planned and it would allow me to go to church.  It sounded like a win win.  An hour nap before church was kind of a tease, but I will pretend it kept me at least had way functioning.  It was announced at church that they would be having a BBQ and fireworks on the beach out in Chiniak around 7pm.  It sounded like a late night, maybe too late.  We already had afternoon plans that we weren’t going to break.  I guess I can sleep in the car out at the beach if need be.  We stopped at Walmart on the way home and picked up salmon eggs and some extra weights for fishing.  We quickly made egg salad sandwiches, but not quick enough soon the powers family was over and we were no where near ready.  They helped us peal eggs and soon we too were ready.  The plan was to go to the stocked Abercrombie lake. The sun was out and beautiful, it couldn’t have been a better day for it. 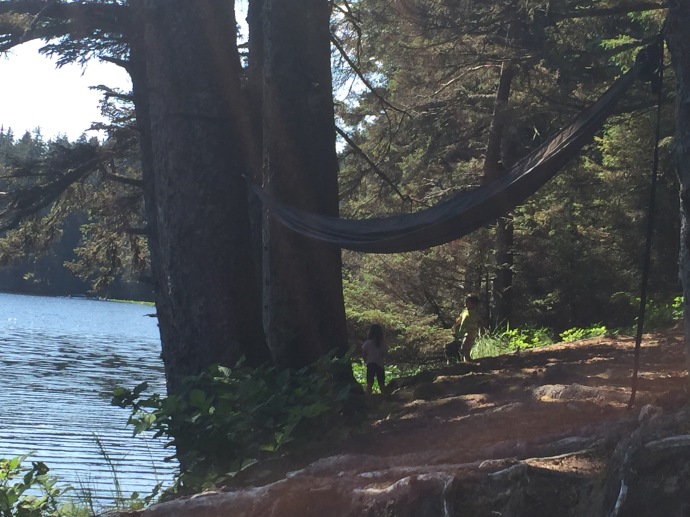 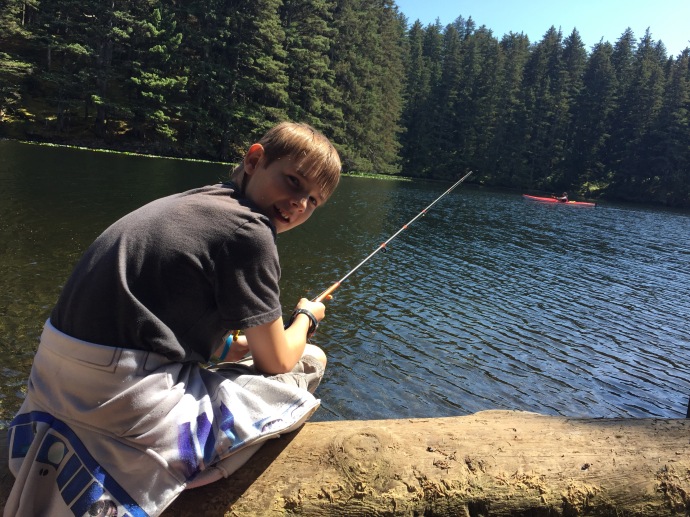 although we caught three fish total none of them were big enough to keep.  The best place to catch a fish was at the edge of the lilies, because of that several times we ended up snagging our lines in the tree or amongst the lily pads.  Sandra who was in shorts and water shoes was good enough to rescue the line.  I wish I had taken a picture because especially the line stuck in the tree made for a very precarious rescue. After fishing we headed to Island Freeze a new frozen yogurt place that just opened up in town.  We stopped on the way there for Chad to run into the fireworks stand to scope it out.  Soon he came running out to grab a little extra cash disappearing with a promise to be back in two minutes.  Sure enough he came trotting back it with a couple of bags of fireworks.  We were going to be so late, thank goodness our friends were so forgiving.  Island freeze was good, a little expensive for what it is, but there was a lot of combination options which made it extra fun with the kids.  We bought one bowl of yogurt and all five shared it.  We finished up there around 4:30pm.  We ran home and had the kids change their clothes, Hannah must have grabbed her swimming suite because she had it when we made it to the beach.  We then stopped and picked up a large package of hot dogs then headed towards Chiniak.  It is a long drive out there so I reclined my seat and covered my head in hopes of getting in a short nap.  It took us a little while to find out group and one of the beaches we checked out there was a minke whale about 50 yards out into the water we noticed it right away has it breached the water flopping down on it’s side.  Then it preceded to come up and show it’s back blow its air and Bob along the surface parallel to the beach.  Wow! So crazy.  So weird to have it so close to shore.  I hope it is not swimming in that close because it is sick.  We continued up whale bone hill finding our group on the other side. We arived around 7:15pm.  It may as well have been 4:00pm the kids took off with their friends playing.  We enjoyed watching them while visiting.  I was short on memory so I didn’t take many pictures.  The plan was to wait until dark then light the fire works, although the sparklers, bunker busters, and bottle rockets got a head start.  The kids (and Chad) have been looking forward to the fireworks here in Alaska all of the fireworks and firecrackers for that matter, that are illegal in the lower 48 easpecially Oregon are legal here.  With supervision by Chad and Richard Caleb was lighting off mortars and gave us quite a show. 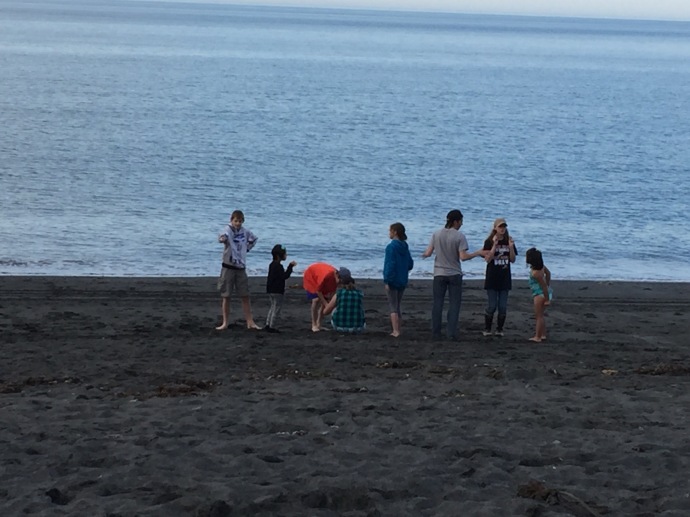 Yes, they are in swimming suits and they are swimming in the nice warm Kodiak Alasaka ocean water…😱.  Brrrrrr! Eve was not supposed to be swimming but of course she “fell” in.  Her splint doesn’t seem too worse off for the wear.  The sunset was to die for. 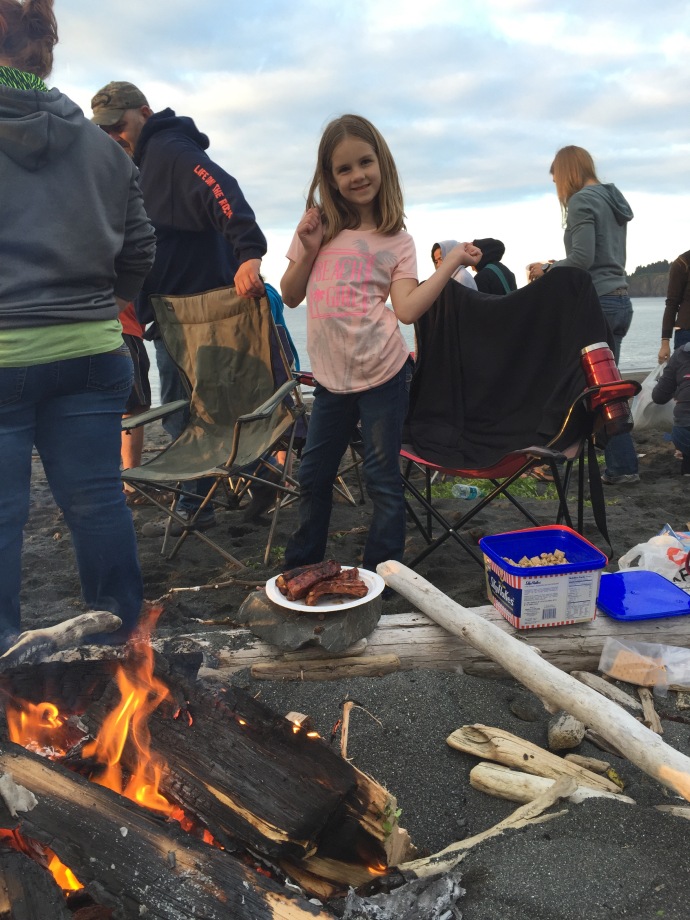 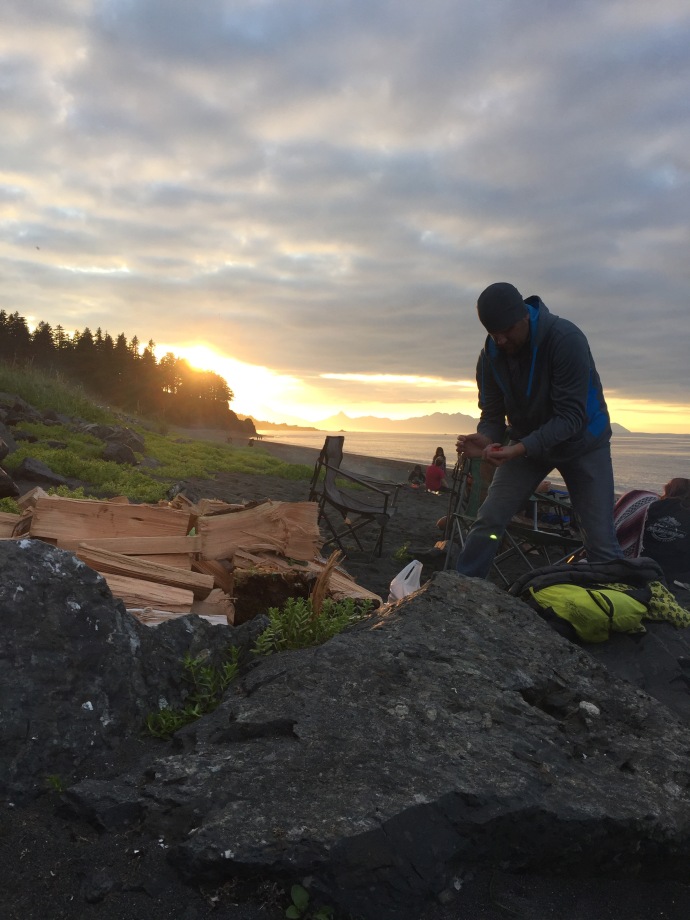 Now this is s’mores done by a master.  Cinnamon graham crackers with chocolate chips melted by the fire, topped with three perfectly toasted marshmallows.  Talk about perfection. 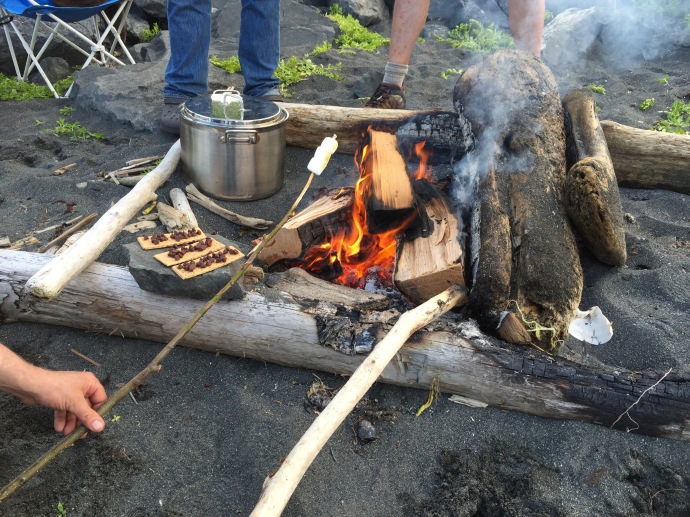 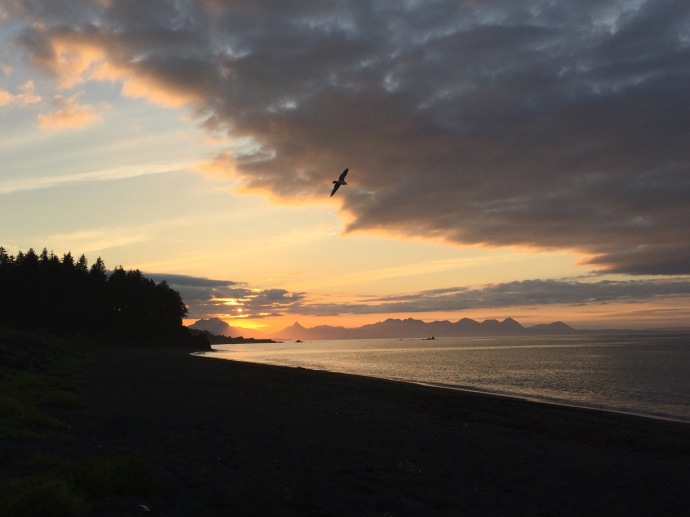 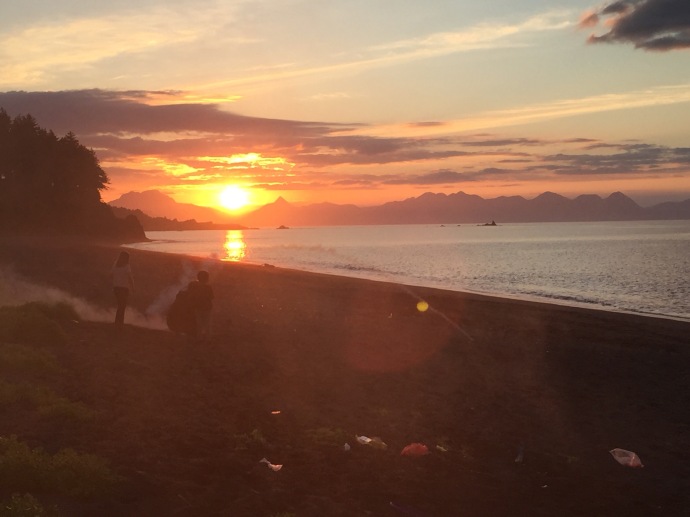 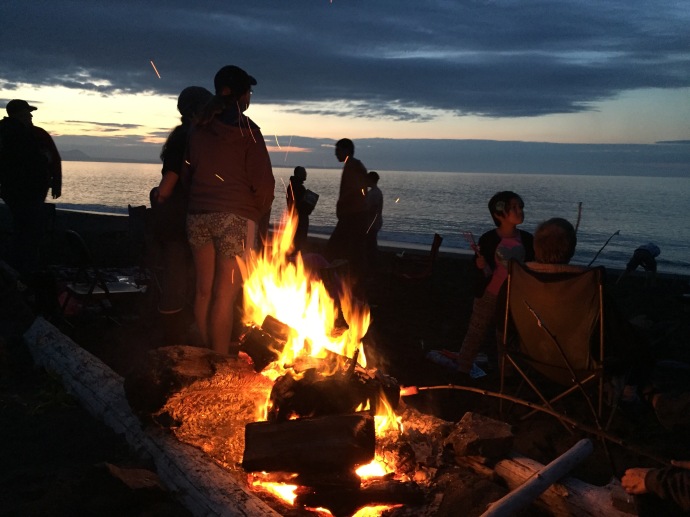 we waited for complete darkness and it never really came. We left around 1:30-1:45am.  It was close enough. ​We climbed into the car to go home all full of joy, love and appreciation for the people that have been brought into our lives.  The kids proclaimed that this was quite possibly the best day of their whole lives.  It could only be made better by the presence f family. 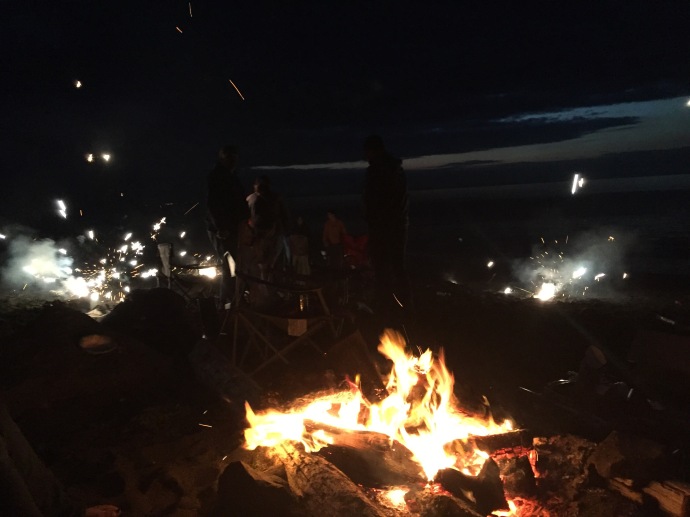 The next morning Caleb proudly showed off his pyrotechnics guy war wounds.  Blisters and burns on his thumbs, asking if he can go buy more and set them off tonight. 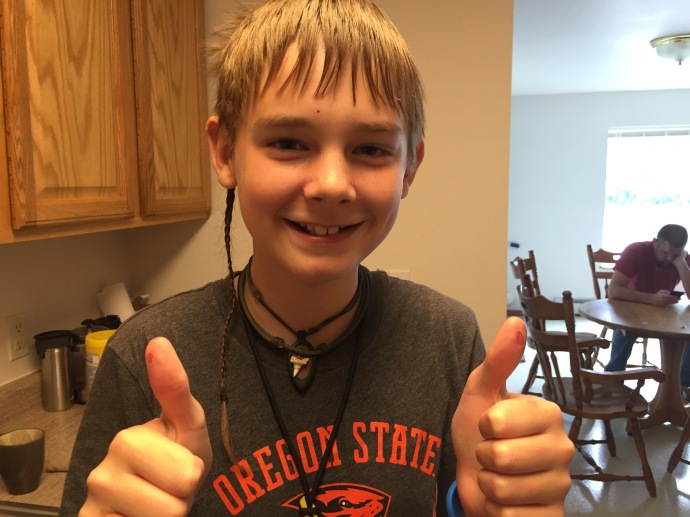