Posted on November 7, 2015 by theowenscrew

We woke up extra early this morning so that we could sneak in a drive out to Pensacola Beach for sunrise (30 min. drive in the opposite direction than we needed to go) it was dark and the mist was visible so heavy in the air.  The AC in our room kicked on at 5:30 am when we opened the door to our room to take the bags out to the car and discovered how warm it was outside already.  As we turned to drive out over the water towards the Pensacola Beach Sandbar it started getting light. The fog was so thick I was sure we would not be able to see anything. 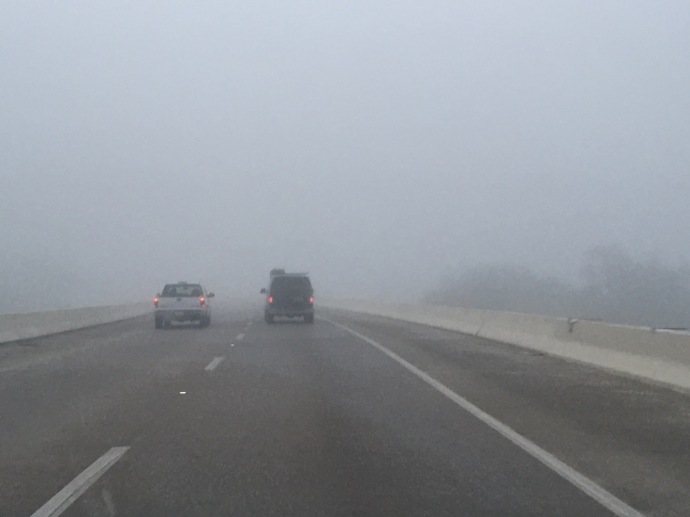 When we arrived it was starting to have patches of better visibility and when we turned to find a parking spot amongst the hotels the fog was completely behind us, and we could see the white sand in the distance.  It looked beautiful, but it took us longer than planned to get out there and so once we got out of the car we had a whole four minutes to get to and enjoy the beach before getting back on the road if we were going to be on time for our breakfast date with Matt and Katrina Wilson from our First Naz Sunday school class.  Needless to say we did not get back in the car in enough time to be on time but we were able to give them enough warning that we weren’t setting them up later and now we can say we have seen the Gulf of Mexico.  We probably saw it last night but it was too dark to tell. 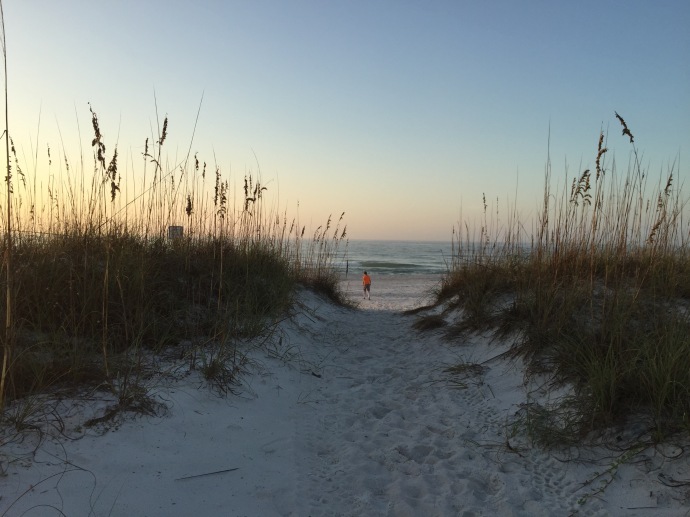 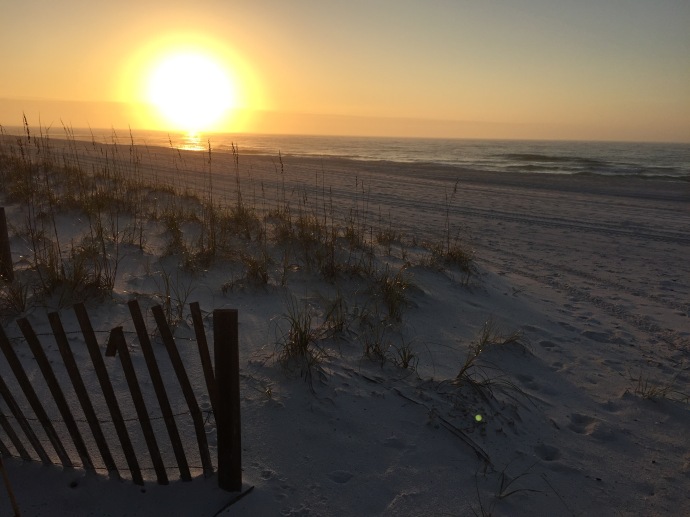 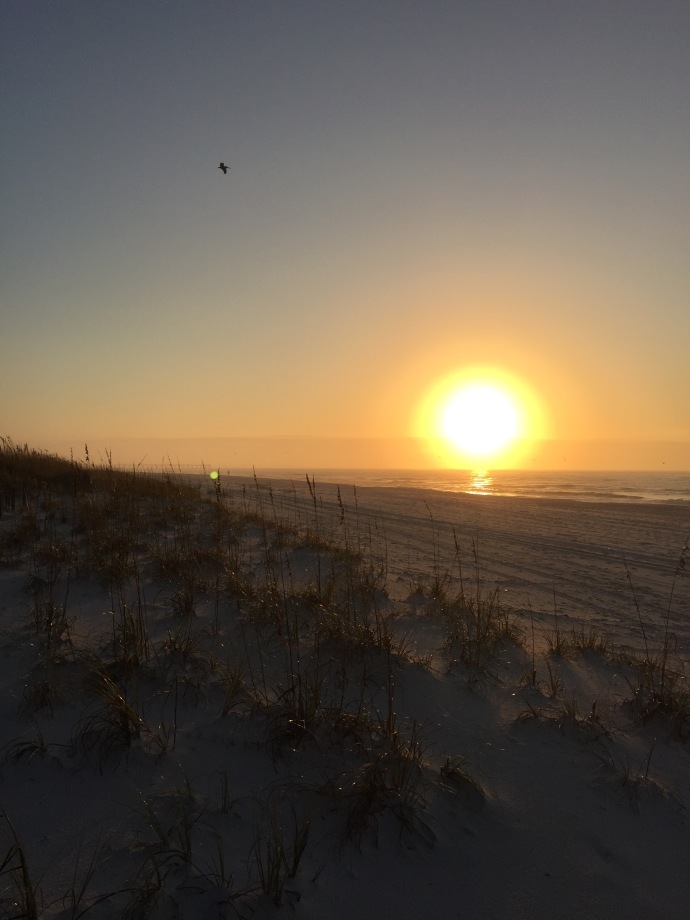 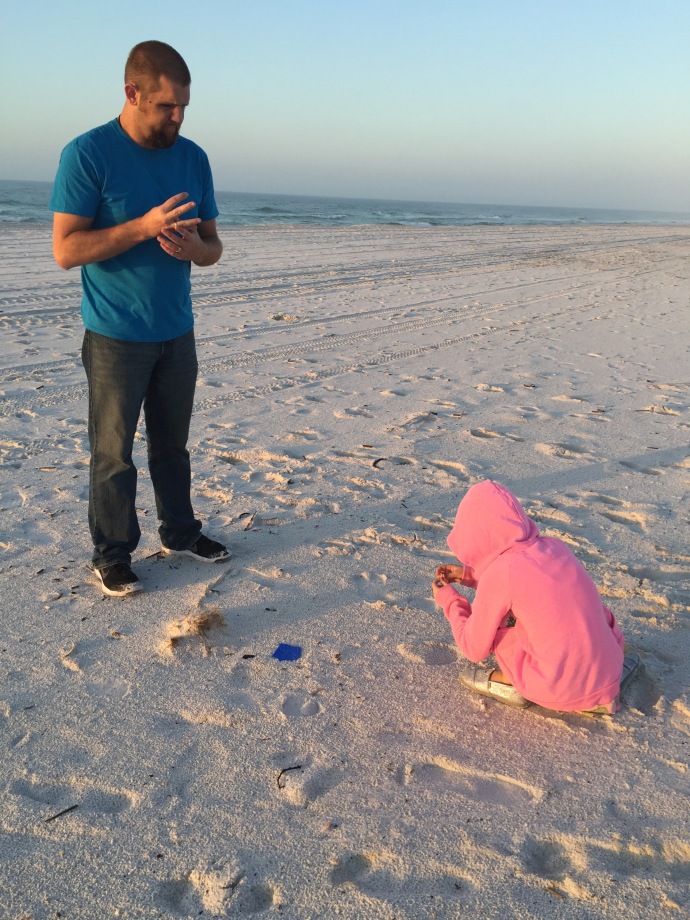 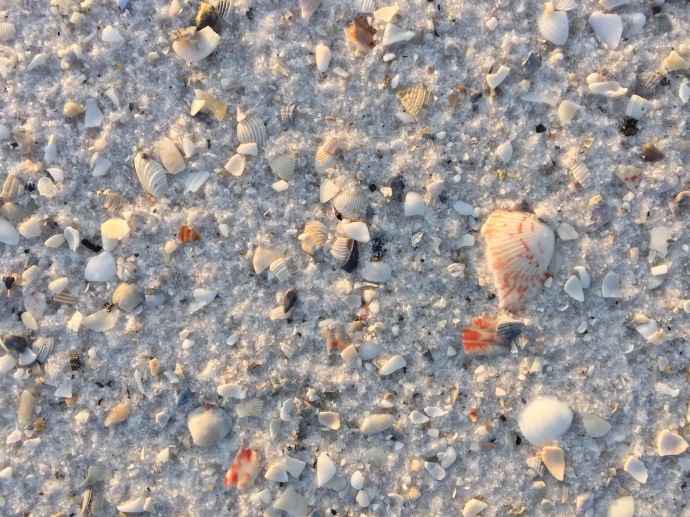 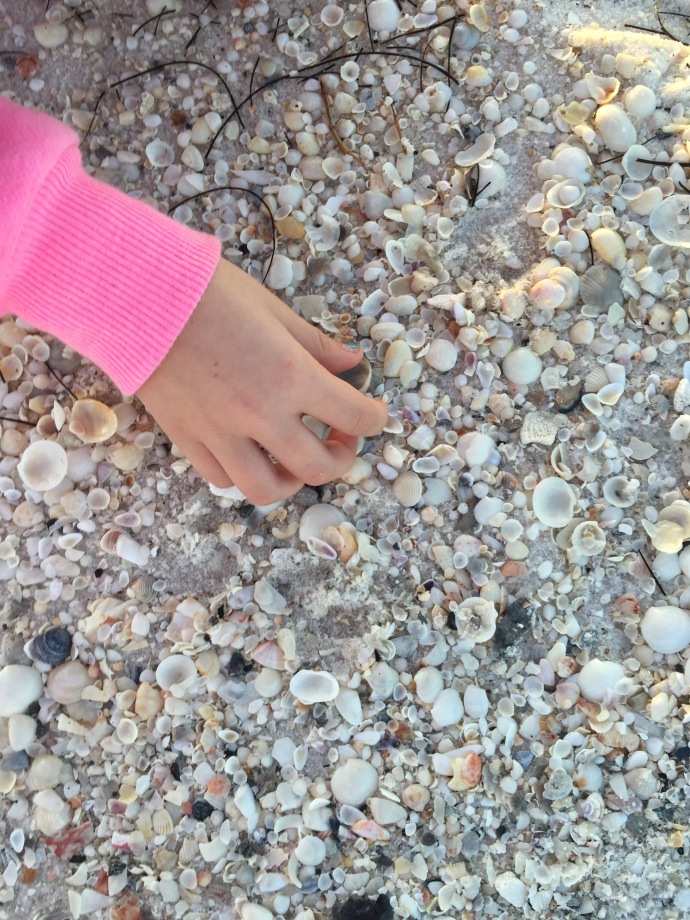 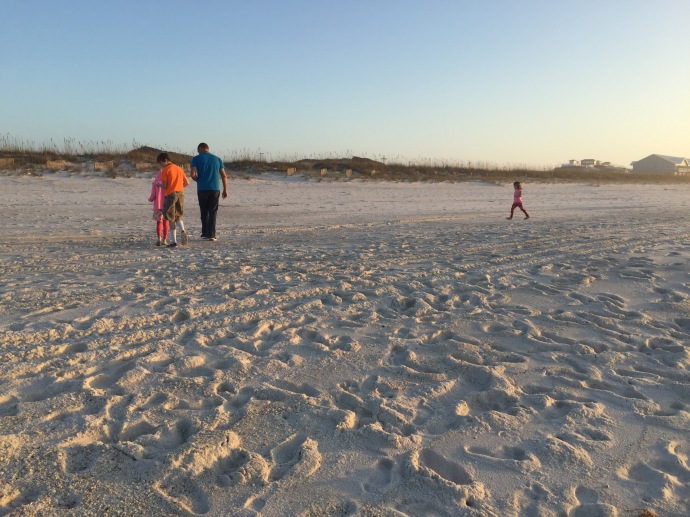 It was AWESOME!!! Beautiful white sand and the shells were different than the ones on the Pacific coast or Hawaii.  We piled back into the car and Chad tried to make up some time, but it was inevitable that we would have to stop and get gas.  We messaged our friends our new ETA so they could take their time and not stress. Getting out of the house with two littles is sometimes a challenge.  We remember those days.  We arrived at our destination 10 min. after our original meet up time which we count a victory.  We spilled out of the car which you can imagine by now is like a dumpster in the back seat.  We try to keep the mess to a minimum, but we can not always stop for meals and the kids got the brilliant idea to crumple up half a ream of paper into little balls and throw them at eachother.  We have taken out grocery bags full of papers and wrappers every few stops, but it doesn’t keep paper and colored pencils from spilling out when we open the doors.  Add to this that at least our littlest never keeps her shoes on so she has to sort through the mess to find her shoes and then she throws them out of the car, climbs out, then puts them on.  In this particular time the shoes rolled under the car.  At that point all you can do is shake your head.  As any parent anywhere knows that you can’t can’t control your kids actions sometimes we wish we could or at least be able to anticipate what they might do.  This one leaves me speechless all too often.  We made it in the diner to discover our comrades already there and seated.  We joined them.  A year and a half is a long time.  Nathan was a baby last time we saw him and Olivia is a new addition.  Plus that, these kind of experiences that they are going through as a family changes you as a person and as a family.  They seemed to be doing so well. It was apparent that our kids, namely Eve, needed a chance to burn off some energy as we have put about 60ish hours in in our car seats in the last week.

Matt offered to drive our car to base if I could ride with Katrina to the Aviation museum.  We were so thankful that we had planned to take these last few days a little slower.  Not only did it cover our butts when our alternator decided to give up the ghost, it has allowed us to take some time to visit longer with friends along the way.  I enjoyed the drive with Katrina, it wasn’t very far at all.  The ID check and look over at the check station was a little disconcerting, but the man was friendly.  I couldn’t believe those boys, we didn’t see them pass us but some how they beat us in.  The Aviation museum was awesome!  So so cool! I missed the trip to the air museum in Tilamook so it was all new to me, and with Matt who has been studying helicopters half leading as a tour guide for our small group he could add a lot of history, facts and tidbits about a lot of the aircraft in the museum that we would not have learned otherwise. 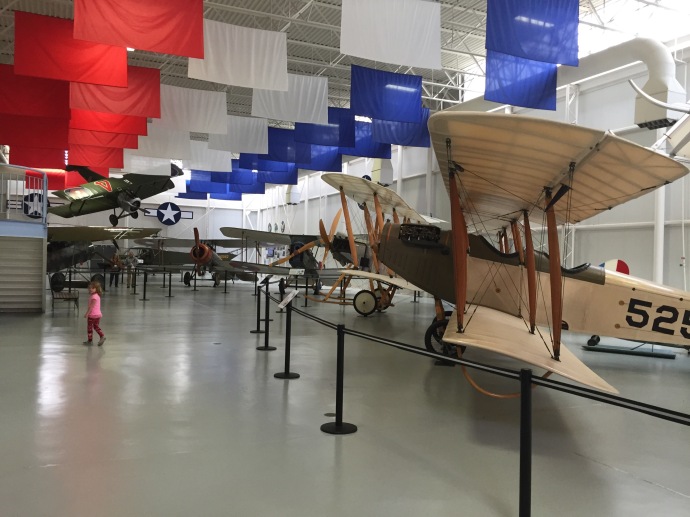 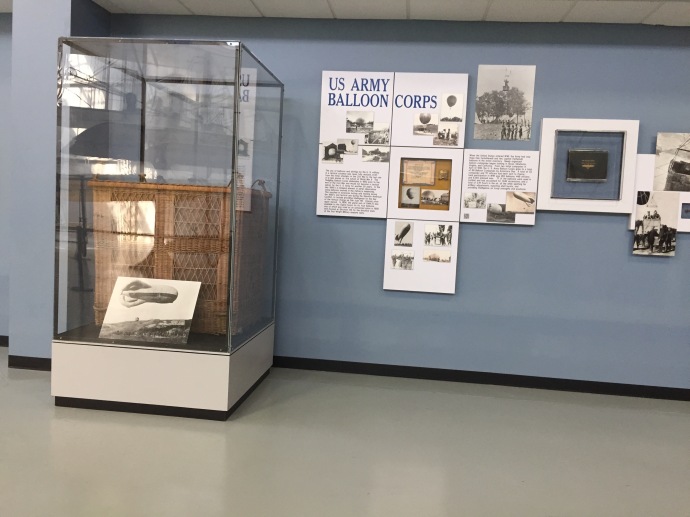 Who wants to send their loved ones into war in a hot air balloon?

This is the Wright Brothers flyer model first marketed to the military.

Sikorsky is the “Wright Brothers” of the helicopter. 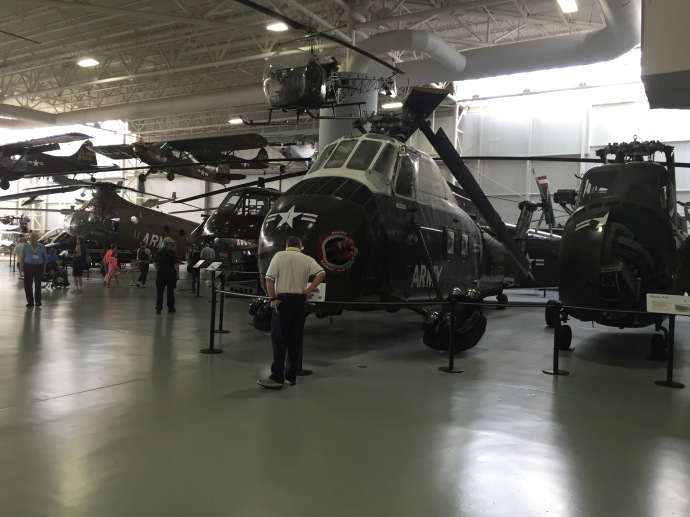 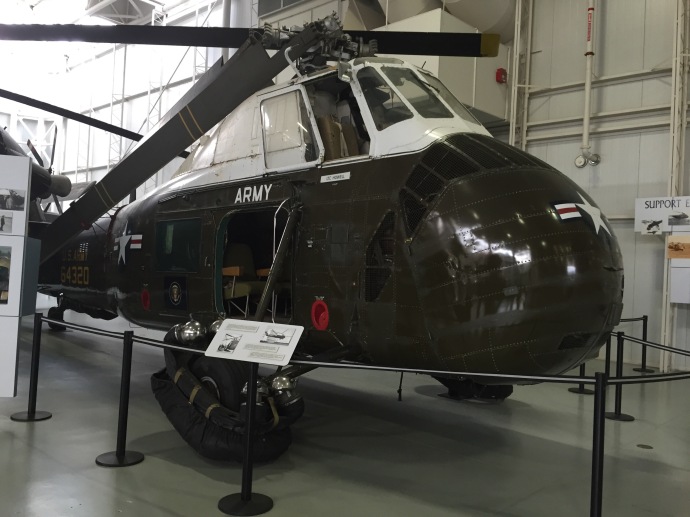 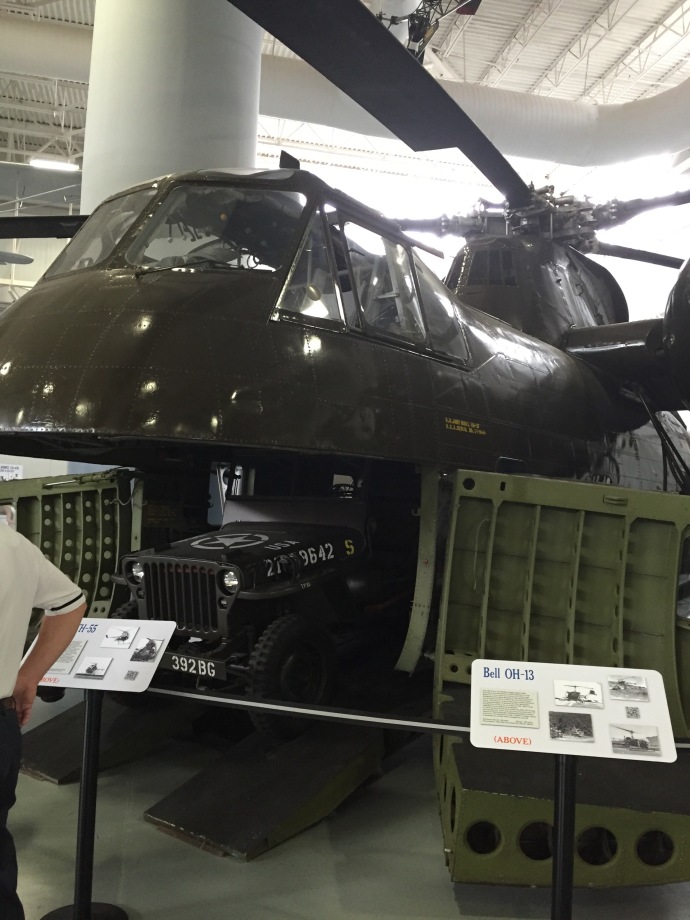 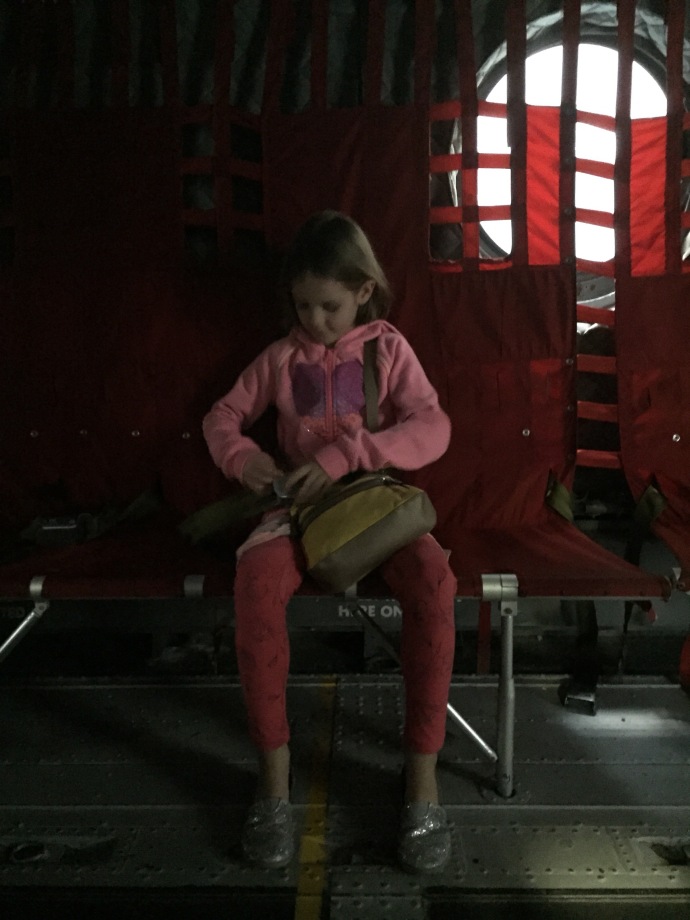 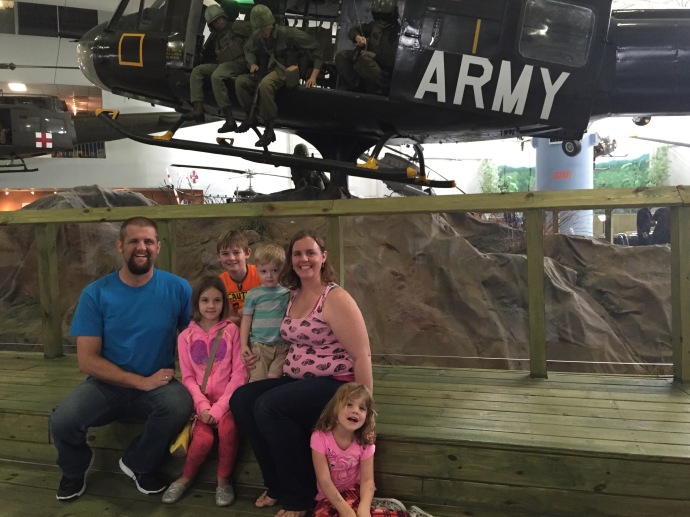 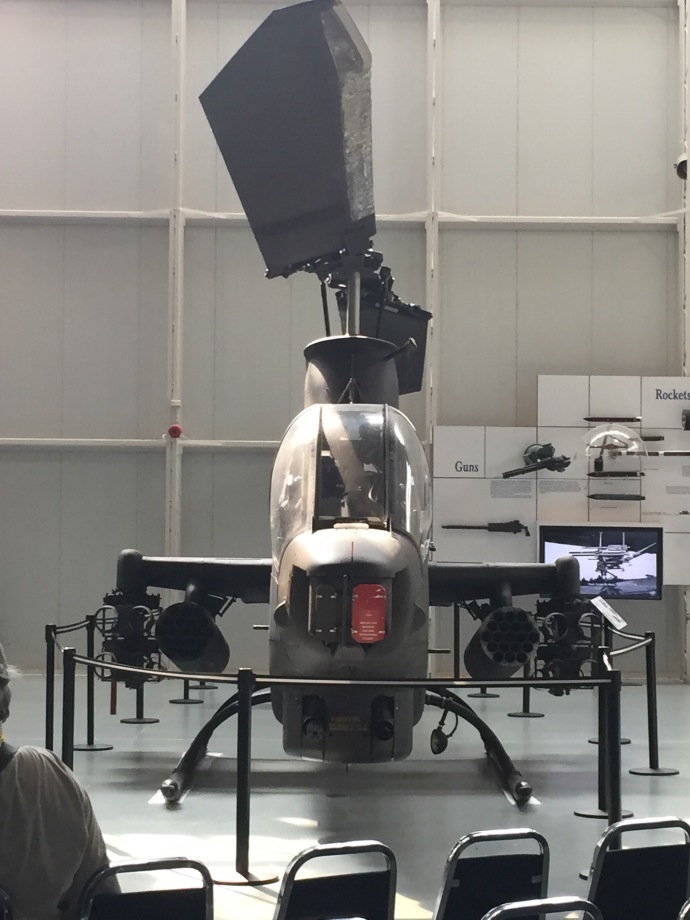 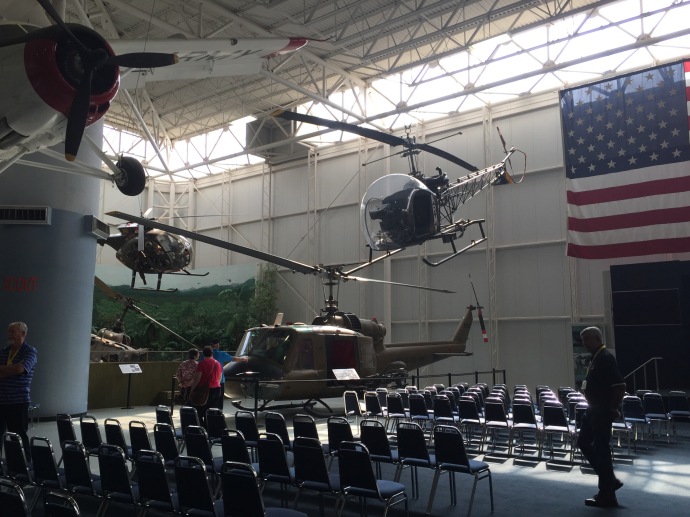 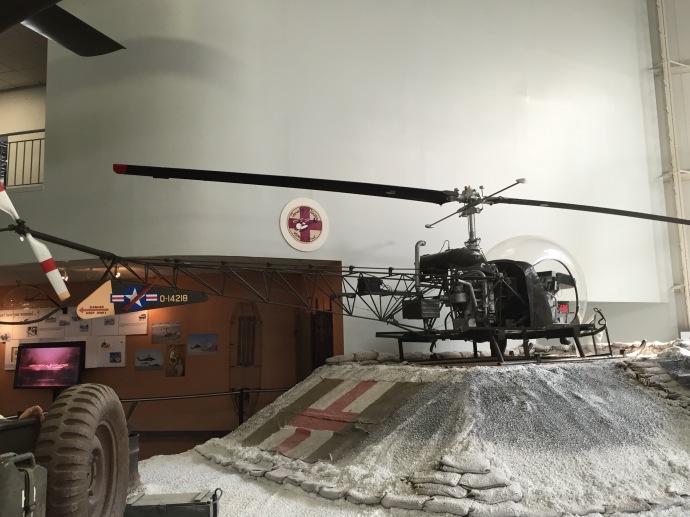 The first helicopters used in the military at a time when they were still learning when and how helicopters would be most useful in warfare. 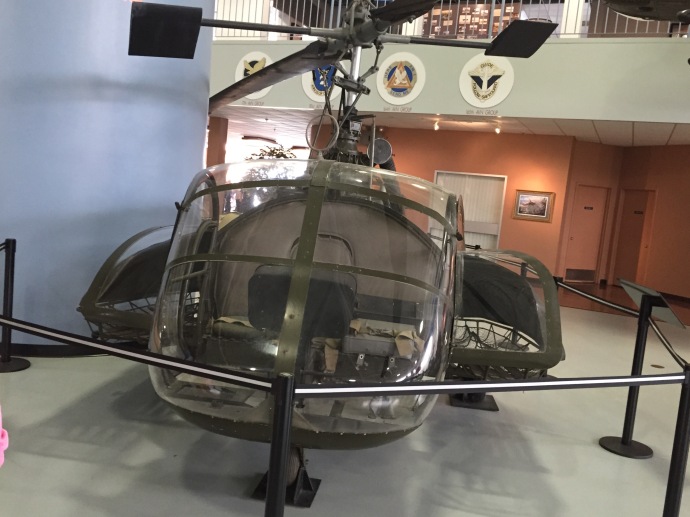 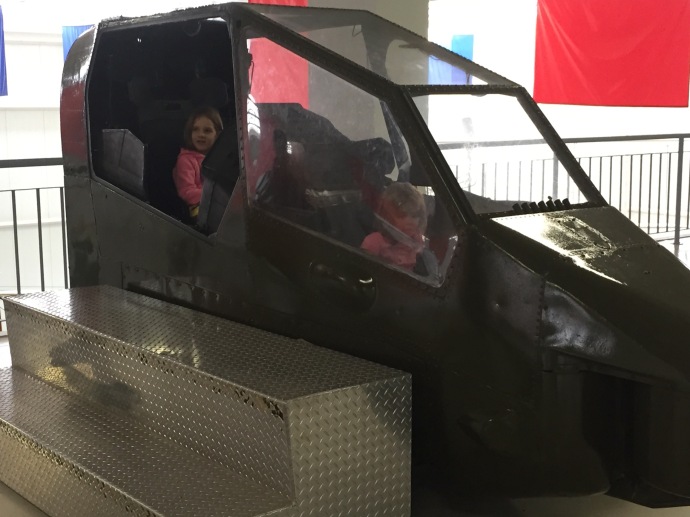 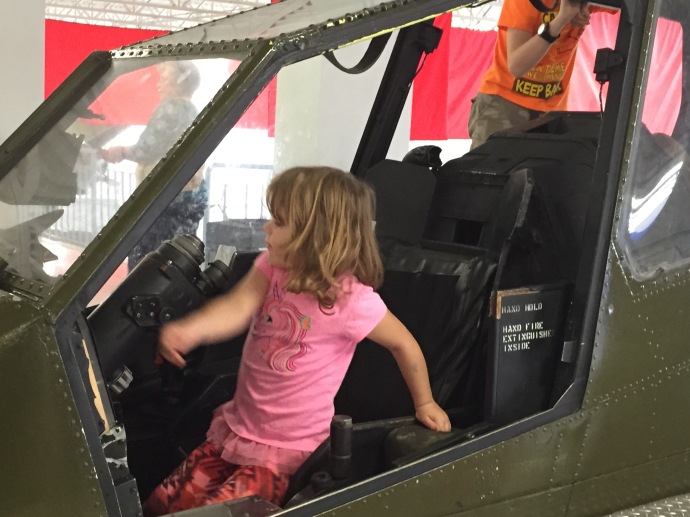 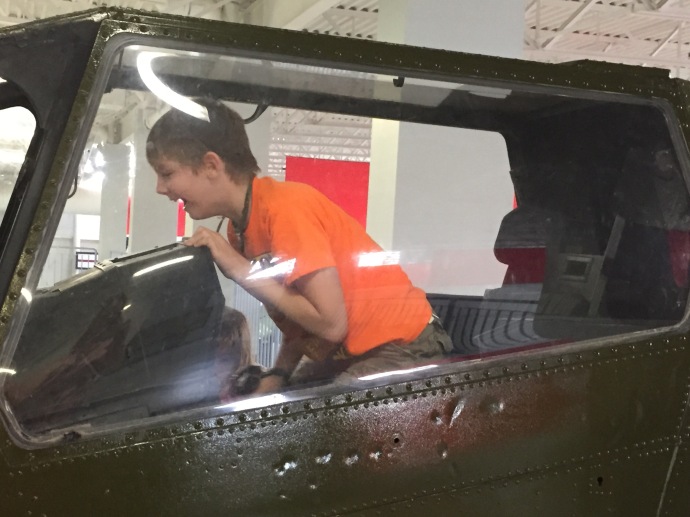 I wish I had the two above pictures in one frame and maybe the sound recording of Nathan’s giggle.  😘

Above is the cockpit of the Wright Flyer 😬below a Piece of the Berlin Wall. 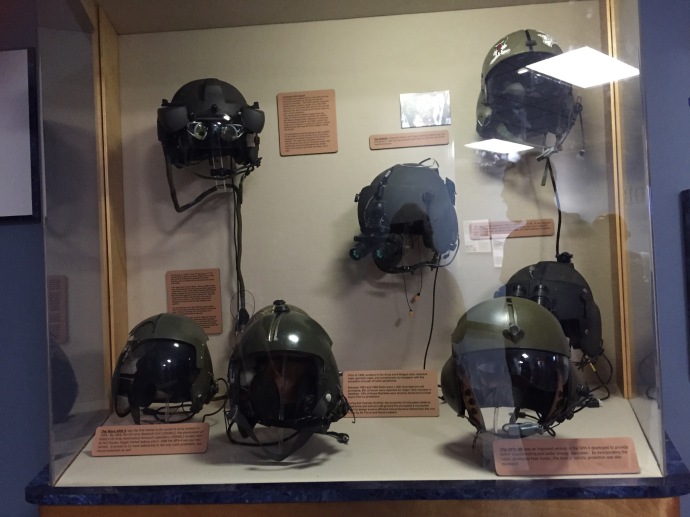 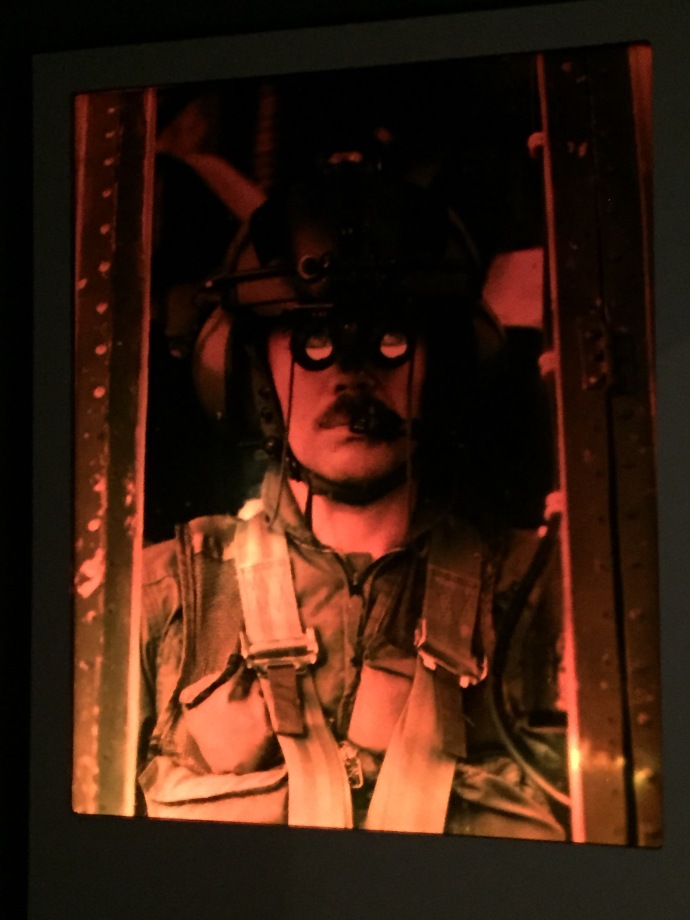 Night vision display was closed for the day… Bummer. 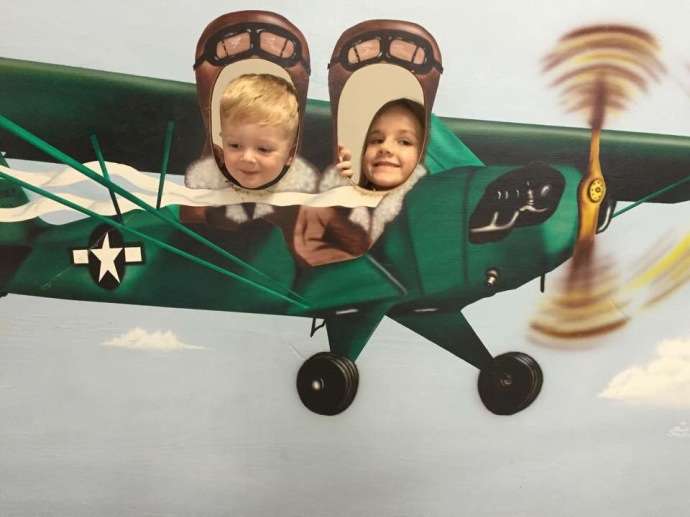 Goofy kids!  It was sad to say goodbye already.  Matt showed us the best way north to the northern check station to get off base, saving us a lot of time that it would have taken to go around.  Thank you Matt and Katrina you have blessed us immensly you and your sweet boy.  Hopefully we will see you again before we leave this side of the Mississippi.

We made really good time into Atlanta where just before we really got into town a rainstorm hit.  We had anticipated get into Charlotte NC around 7:22pm then we crossed the time zone that jumped to 8:22.  Then our whole route started turning red.  Because of the time change it was now 4:00pm and the start of rush hour.  Add to that a whole slew of accidents caused by the rainstorm and we found ourselves at a stand still.  We decided to grab dinner and maybe it would clear up as our current ETA was near midnight.  Well that didn’t help much.  When we got back on the freeway google maps recommended a side road that would save us two hours of practically stopped traffic due to several accidents.  We took the side route which was a fun little series of rabbit trails and we could watch the minutes drop off our ETA we were down to 10:00pm.  The traffic was still slow when we got back on the freeway but at least it was moving.  We decided then that we would go only to the next big town Charlotte would have to wait. 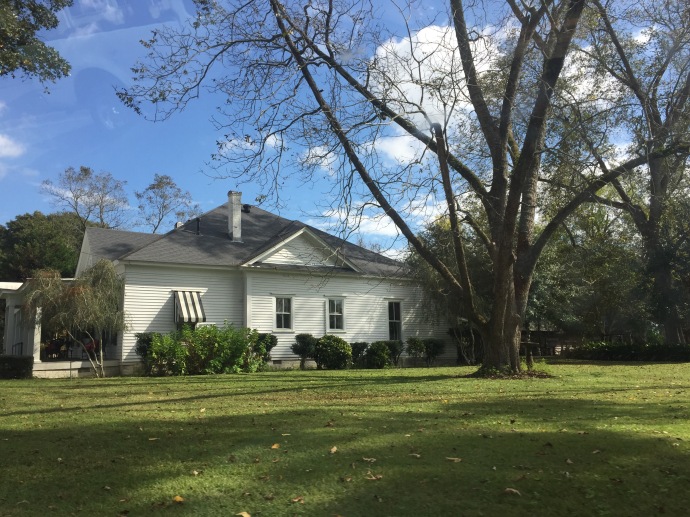 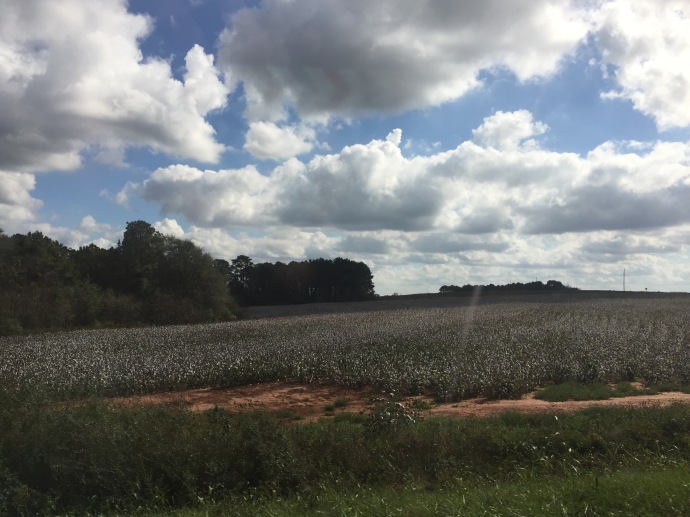 Alabama and Georgia are both amazingly beautiful.  The cotton fields above were like a beautiful paining.

I should have taken a picture of the traffic after this….or a screen shot of the GPS and all of the accidents.  We were so thankful for all your prayers they are working, as we were not a part of any of those many accidents.