To Oklahoma and Beyond

Posted on November 5, 2015 by theowenscrew

We woke up after the sun this morning, you don’t even know how nice and needed it was.  Our little man has had this problem since he was young where if he gets overtired he throws up in the night although he is not sick and in the morning again he feels fine.  When ever he would stay the night with anyone he needed a barf bowl because he would play and get over tired and almost always wake up in the night puking.  At the ripe old age of 10 he has been up late with no problems and we have all but forgotten this childhood issue.  It turns out he still has it and with our long hours in the car and frequent fast food he was up in the night last night puking.  We had left out of Phoenix at 0400 and had made it into Oklahoma City around 11:00pm it was a long day.  We had planned on a slower morning this morning anyway.   We were going to meet my recruiter for breakfast at 8:30 so there was no rush.  Everyone got a shower, and we even had time to fill up with gas before breakfast.

We met Amanda at IHOP, it was fun to meet in person the person we have been talking to on the phone and by texts for the last four months.  We also enjoyed the unexpected suprise of Genesis buying breakfast for us.

We also took a little time to take a tour of the Oklahoma Capitol building.  There was a huge school group there, so their normal tour guides were tied up.  The man at the gift shop was very helpful and gave us a self guided tour book and gave us a few interesting tidbits before we headed up to the 5th floor to start it.  The Oklahoma Capitol building was built between the years of 1914-1917 then with WWI raging the money and supplies set aside to build the dome of the Capitol had to go to the war efforts.  A temporary roof was placed on the Capitol where the dome was designed to be and all attention was turned to Erope and the war efforts.  It wasn’t until 2002 that the $22,000,000 (the original building cost $1,500,000) was raised to put the dome on the Capitol building.

The indian guardian on the top of the dome is 22 feet tall and weighs 8,000 lbs.

The ring of flags is a tribute to each of the native tribes of Oklahoma.

The inside of the building was quite colorful.  Beautiful, meaniningful paintings covered the walls. There was a purple line where the roof had been so you could see that everything above it was new since 2002 when the dome was completed. 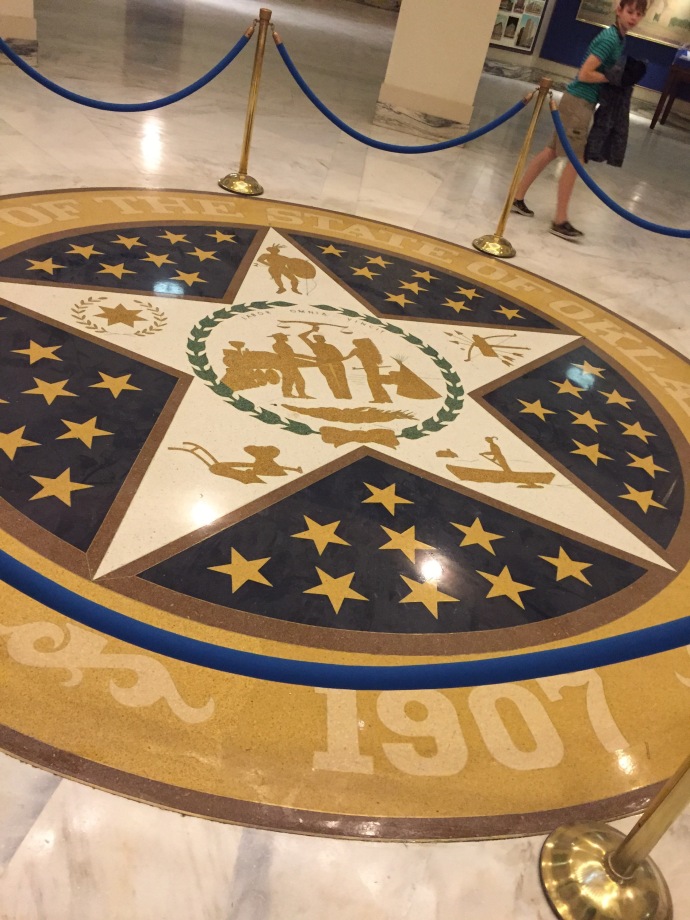 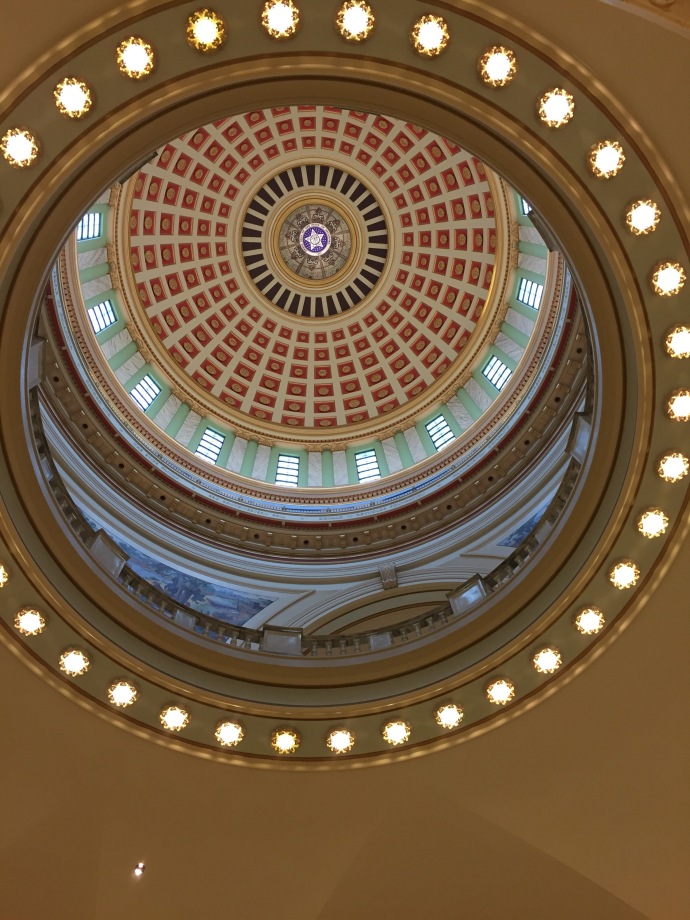 This is are pluck of the guardian indian on top of the building. 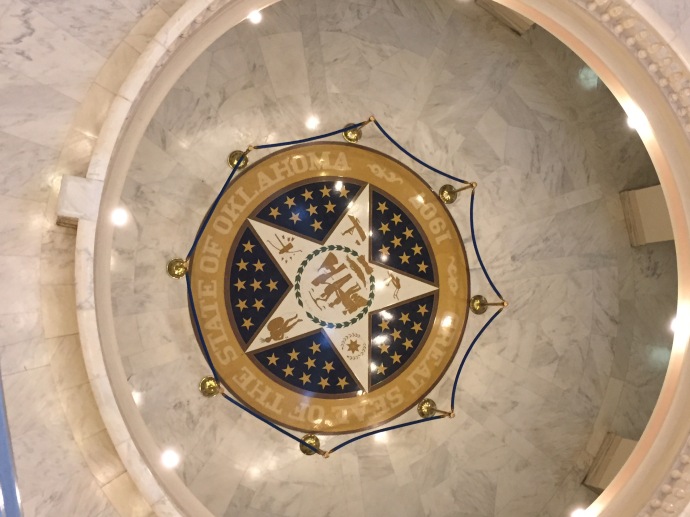 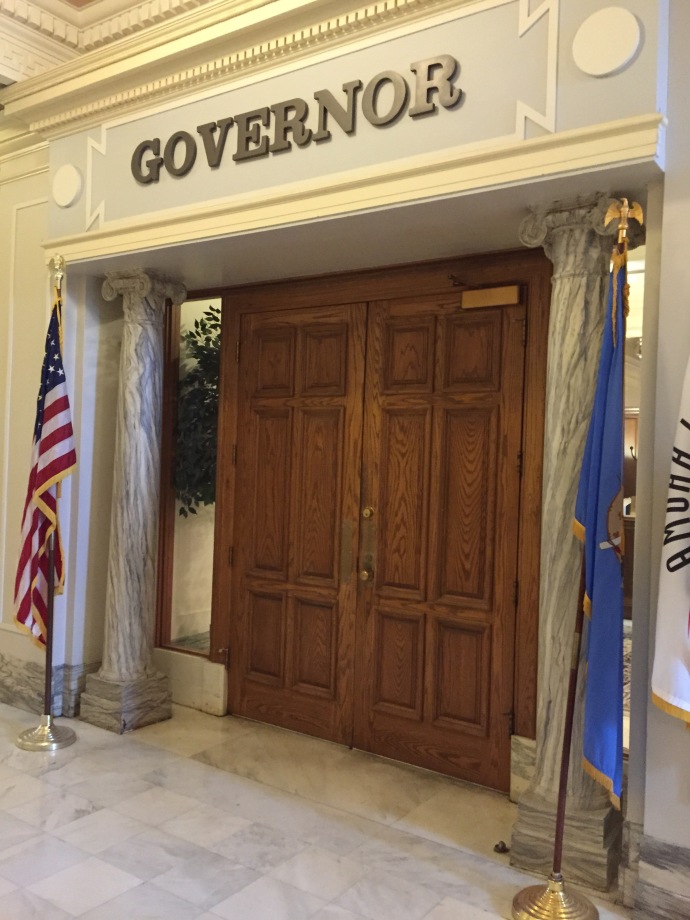 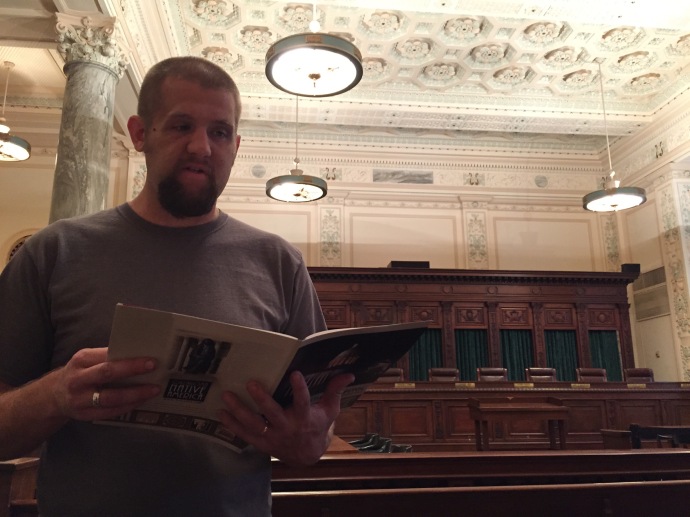 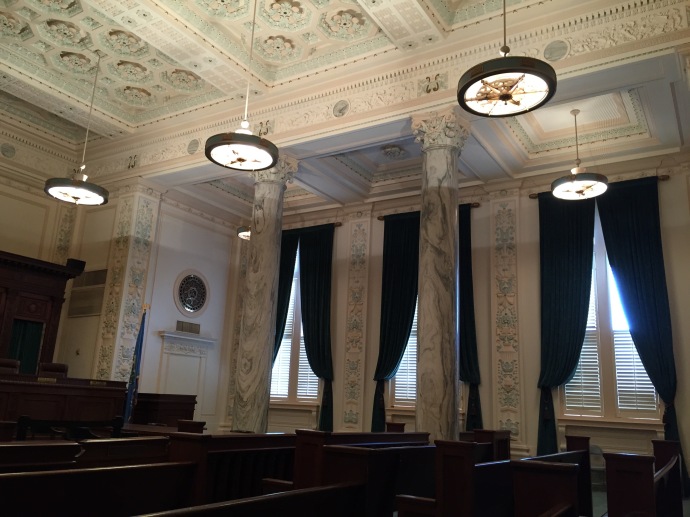 Very cool.  The kids decided to design their own Capitol buildings when we left.  They have been passing papers up to me all day with their ideas on the ideal Capitol building I may post some of them later.  After we left Oklahoma City they all fell asleep.  The landscape was hilly with deciduous trees in full color. 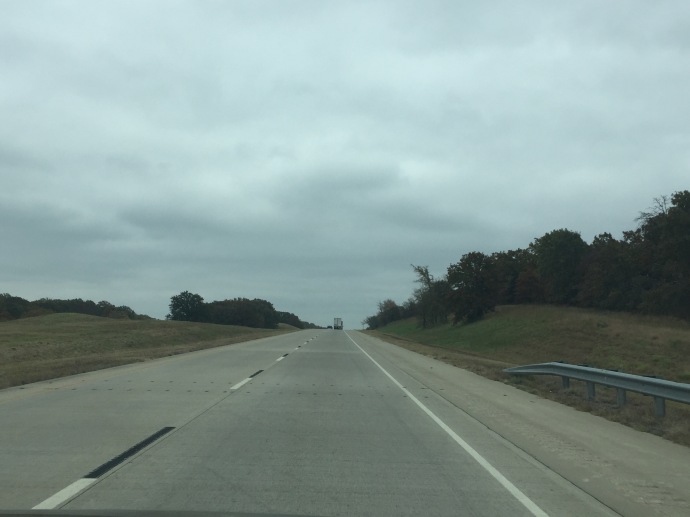 Lunch in small town Oklahoma was interesting, honey we are deffinately not in Salem any more.

The kids loved the visitor center just over the boarder in Arkansas. 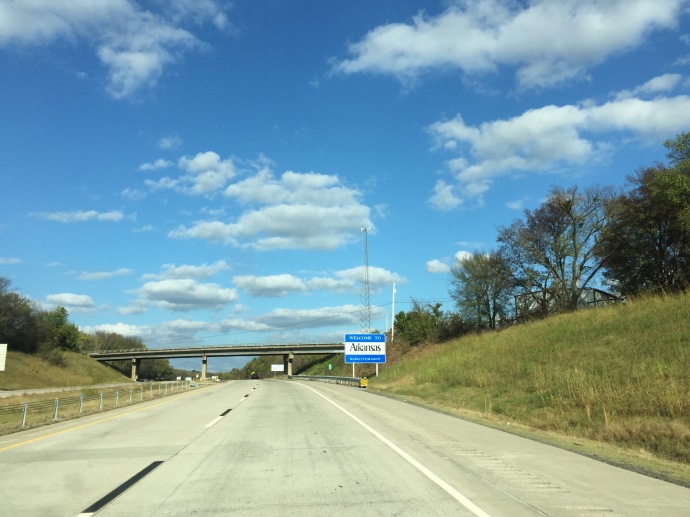 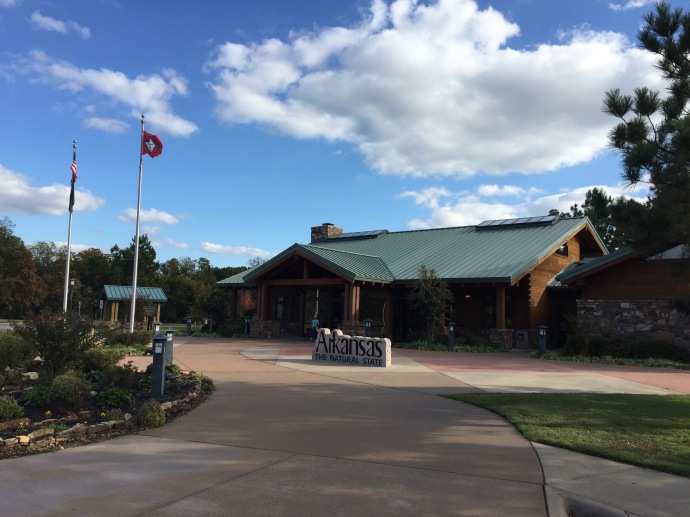 There was a car accident so traffic was at a standstill so, knowing we would not be making it to the Arkansas Capitol building we watched a YouTube tour while we waited for the traffic to pick back up.  With it getting dark at 5:30pm our view of Little Rock looked like this.

We turned south hoping to make it a ways towards New Orleans with hopes to make it further south before turning in.  I had an unbelievable headache and we had accidently taken the Ibuprofen out of the car in Salem.  We stopped at a gas station and got a bottle of Ibuprofen and coffee at dinner time…holding my head to keep it from exploding, my eyes shut to prevent vomiting I popped the ibuprofen in my mouth.  I meant to take four, but I count think strait and I remember popping one…two…three…four…five pills in my mouth.  Keeping my eyes shut with my head wrapped in a blanket on a pillow I realized what I had just done.  1000mg of Ibuprofen, I don’t think that is a safe dose…I have not had a stomache ache, and I pray that y kidneys and liver could take the blow with out any long term effects.  Oops I better not do that ever again.  The good news is eventually I fell asleep.  Chad decided to stop about 8:30pm way earlier than we have been stopping as we didn’t even get out of Oklahoma City this morning until 11:30am.  My head was significantly better.  We didn’t even grab our bags out of the car we just went straight from our car to the room and crashed.