Finally we made it to Kaumana Caves!!! One of our favorite family memories is exploring Ape Caves with Aunt Stephanie, Cyrus, Aunt Suzanne, Uncle Jeremy, and Hadassah (Elijah in utero).  We were eager to see some other lava tubes and use our headlamps.  We had been told by several people it was a short walk even though the Internet research we had done told us that the Kaumana Lava Tube was 25 miles long, and was created in a 1881 eruption of Mauna Loa.   We didn’t know how far we would actually be able to go.  And now that we have done it I have no idea how far we went. We explored the section of the tube going down hill first and although the entrance was larger it was deceiving and we spent a good potion of our explorations in this tube quite hunched over.  It was still very fun. 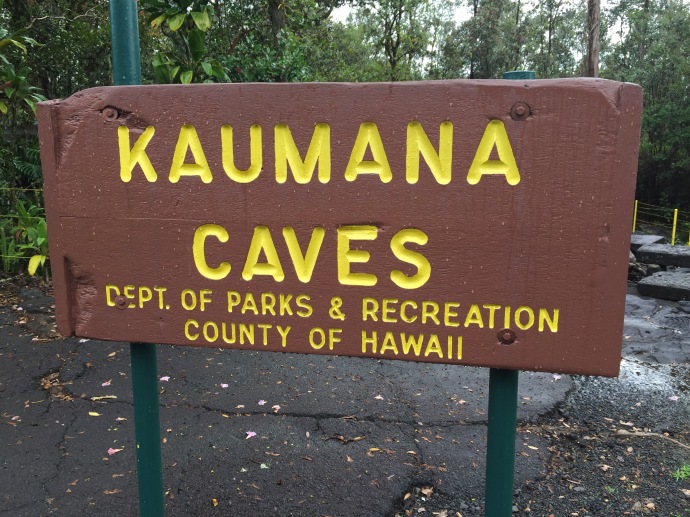 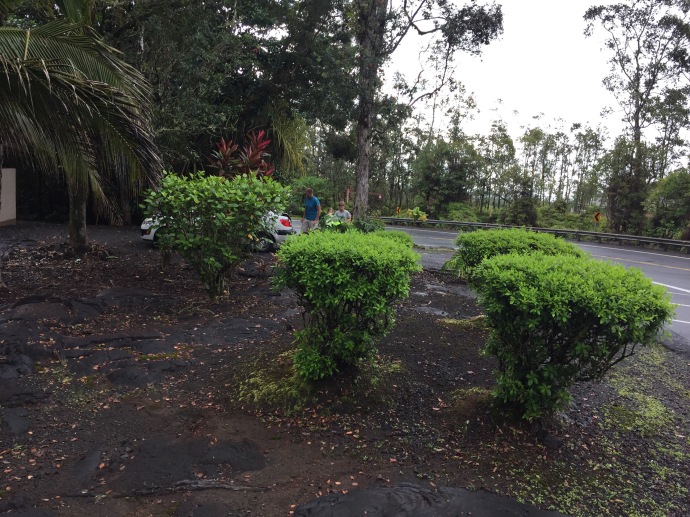 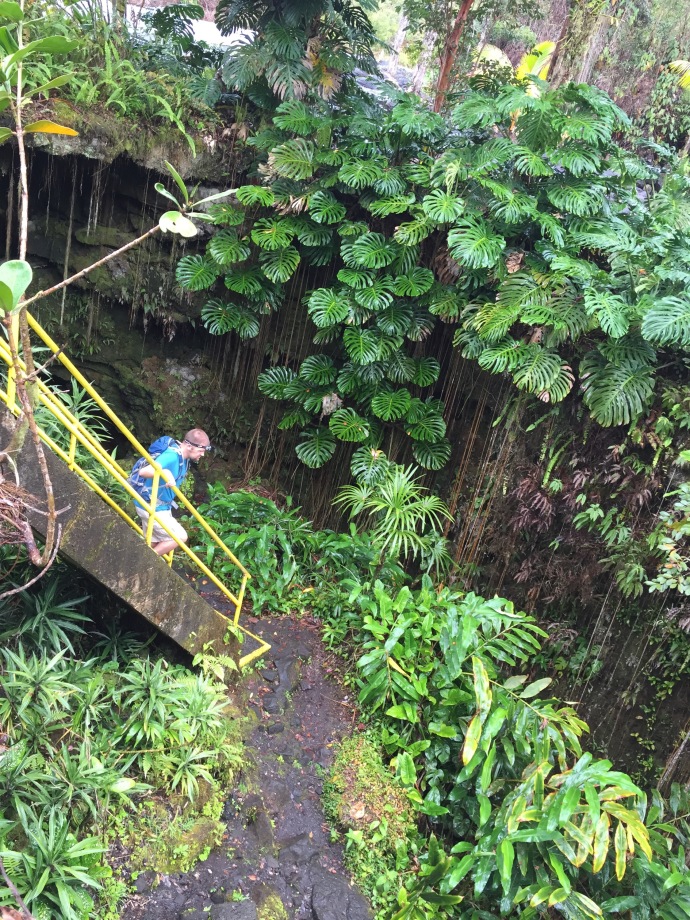 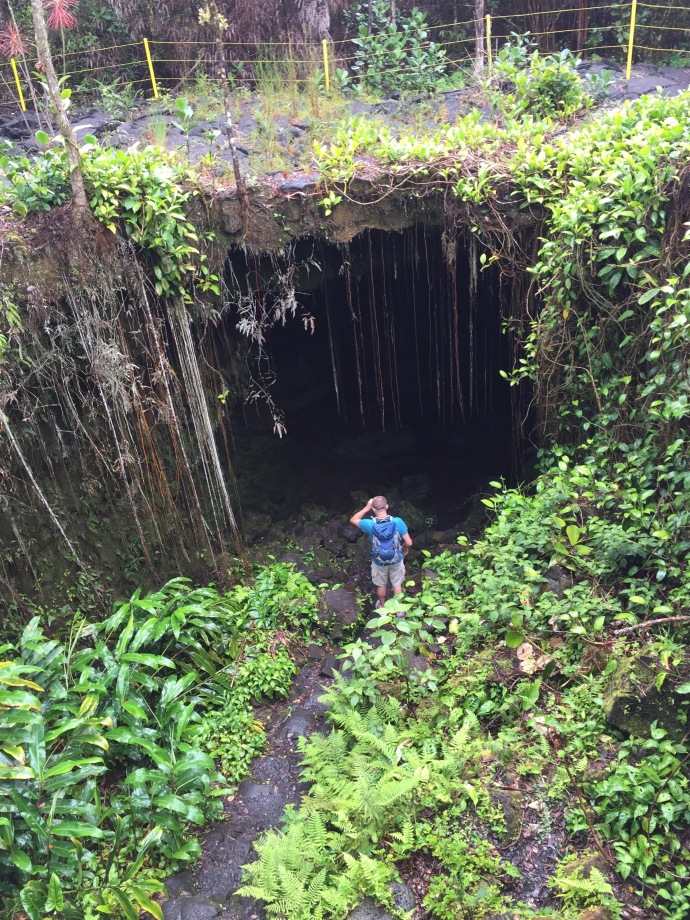 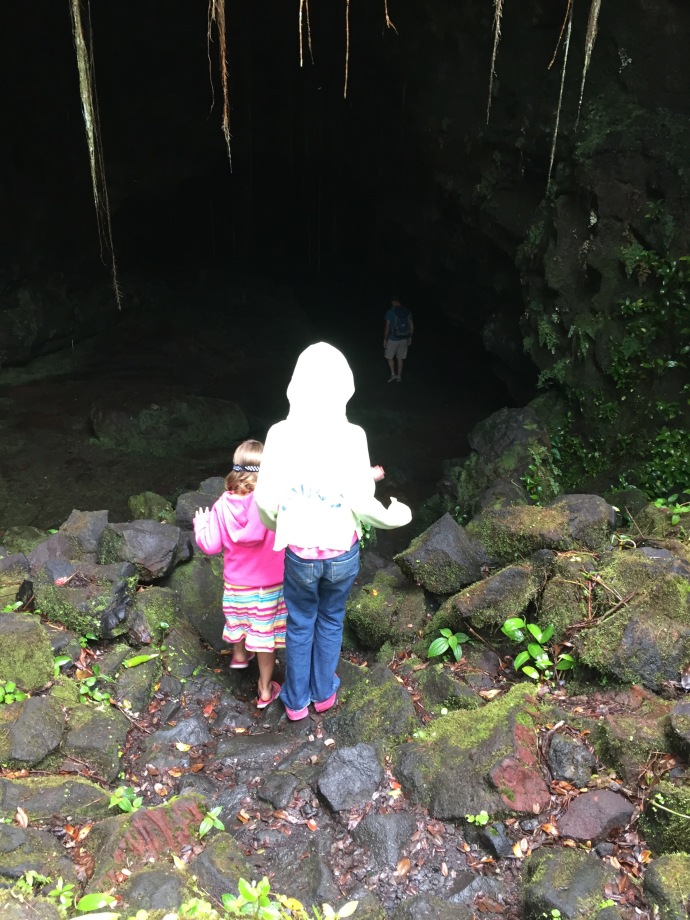 The walls were glittery with the colors of gold, silver, and bronze Chad says that it is the lichen.  So pretty! 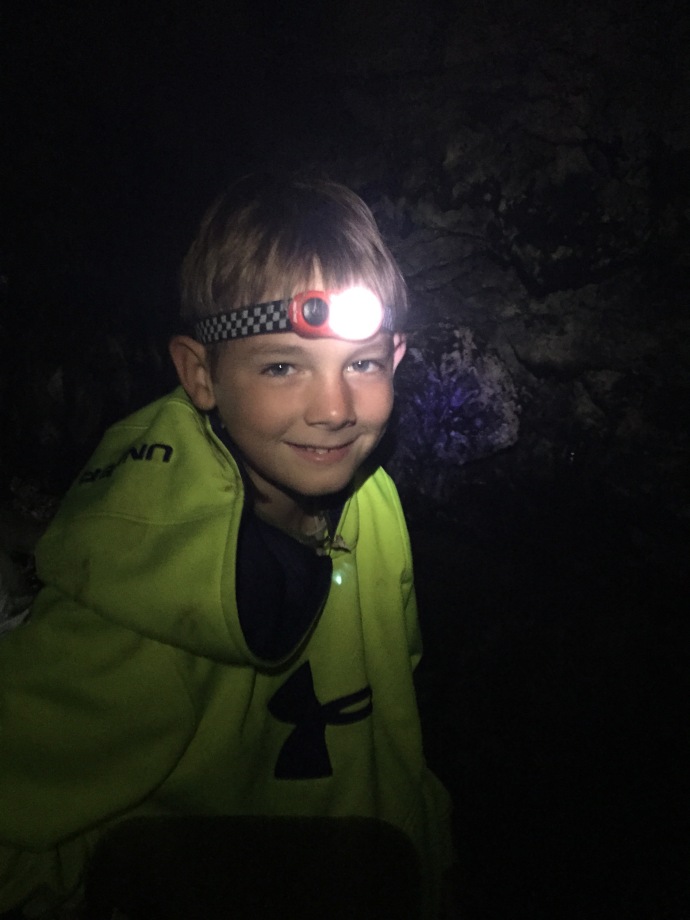 At one point when we were quite a ways in and there was no light from the entrance we shut off our headlamps and enjoyed the pitch black for maybe a minute before we turned them back on. 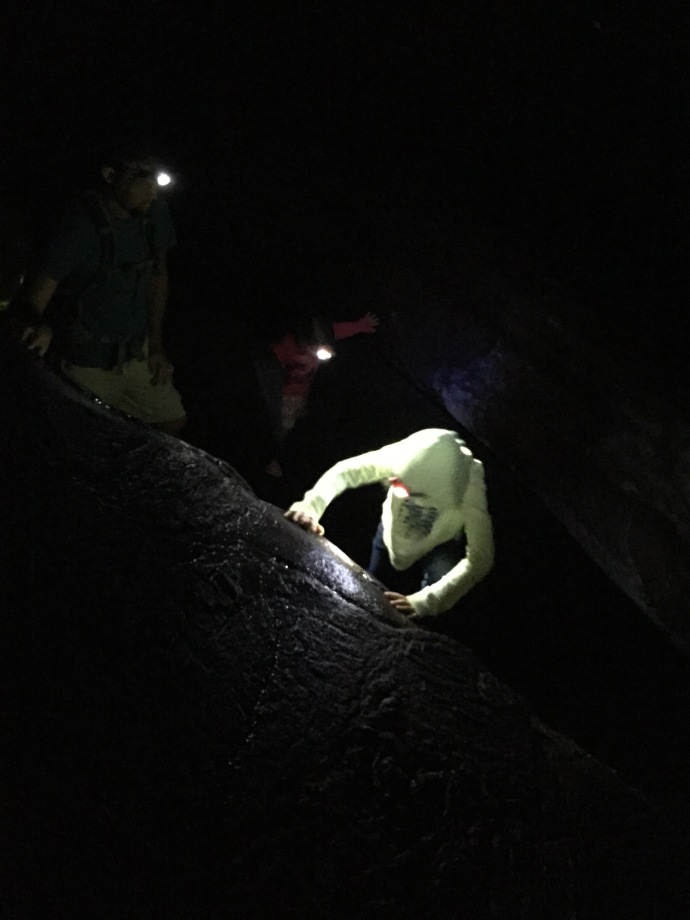 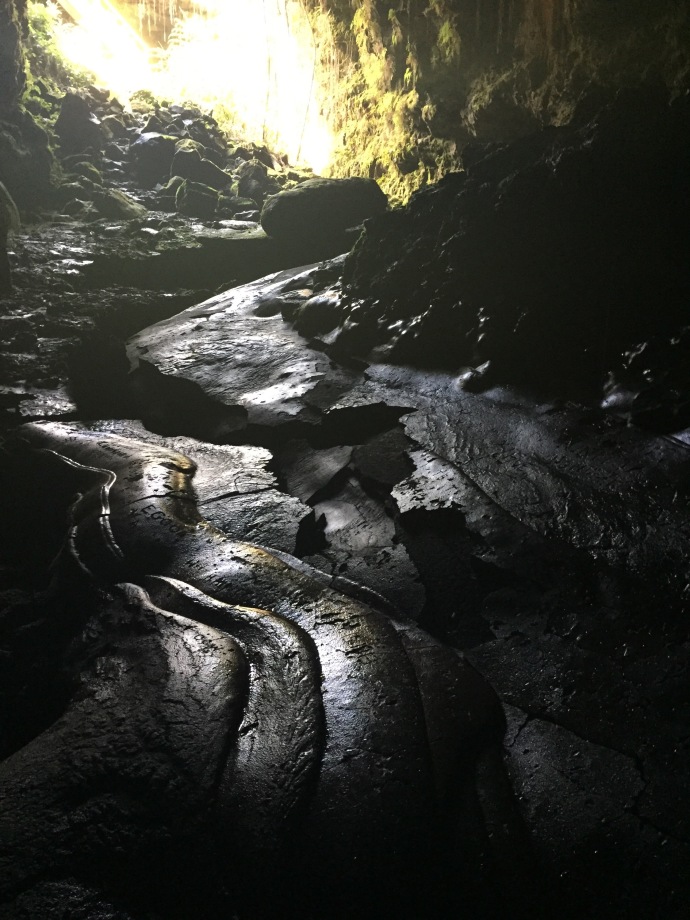 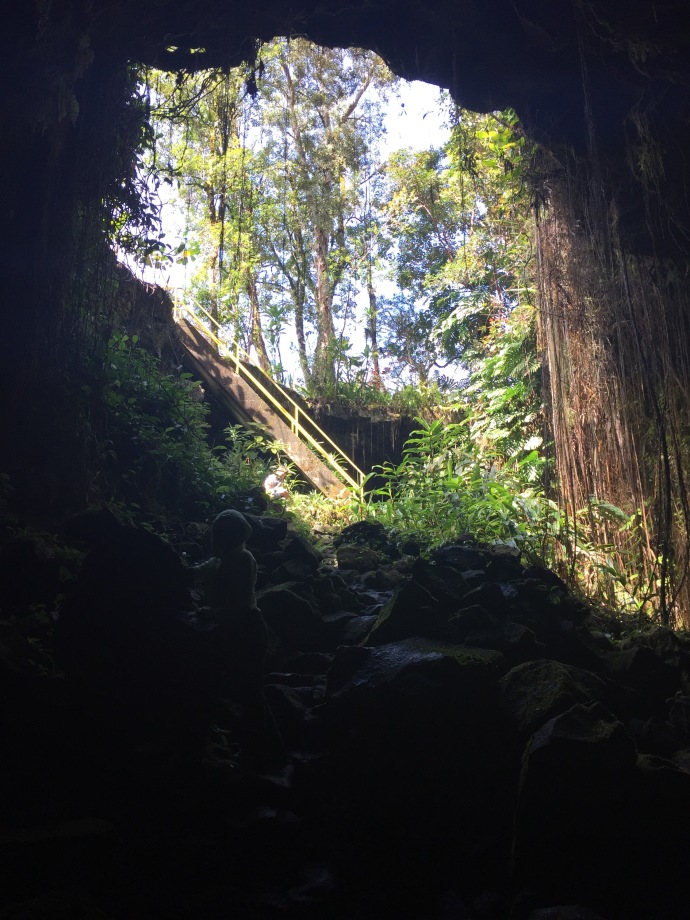 The roots have grown down through the cave the kids thought they should be able to swing on them like Diego and Dora. 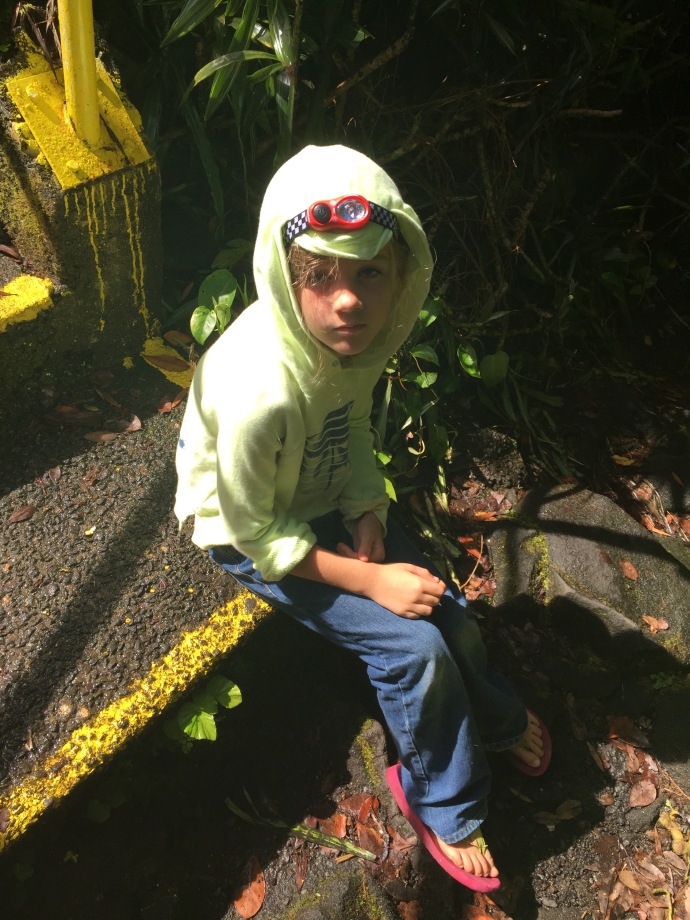 The second cave entrance was smaller and quickly we were doubled over, but that didn’t last long.  Soon we were in a quite large cavern. There were some piles of rubble to climb over as we got deepe, we got a little muddy but over all it was so fun. 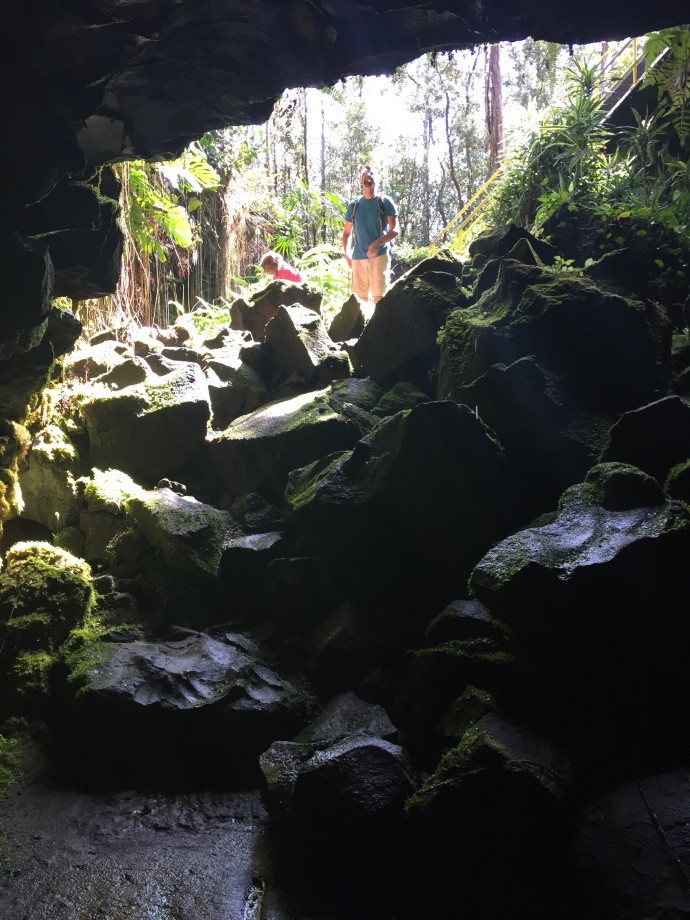 This boy kind of lost his head lamp when he put on his sweatshirt. He makes me smile. 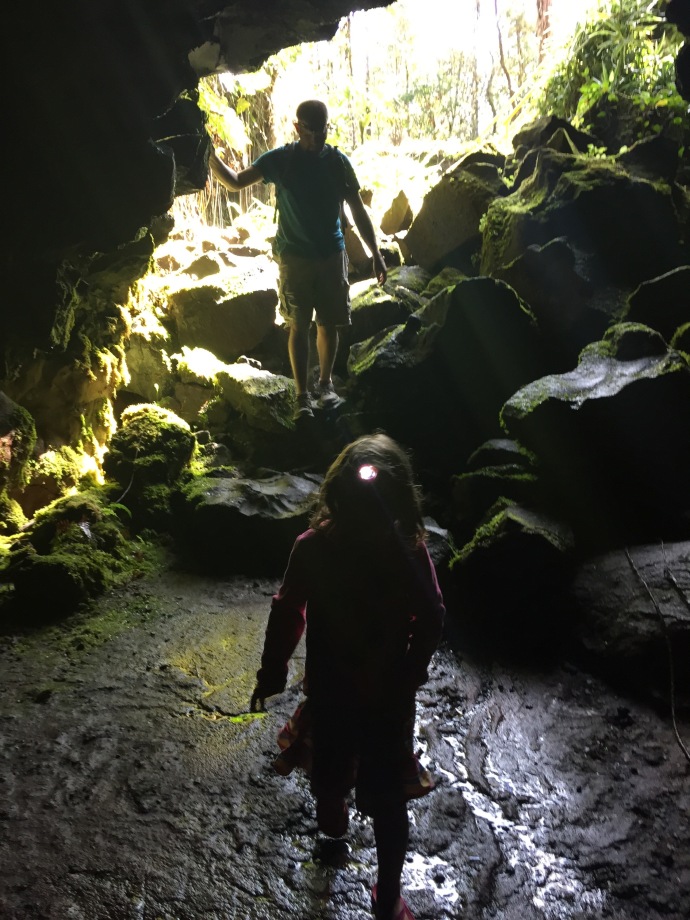 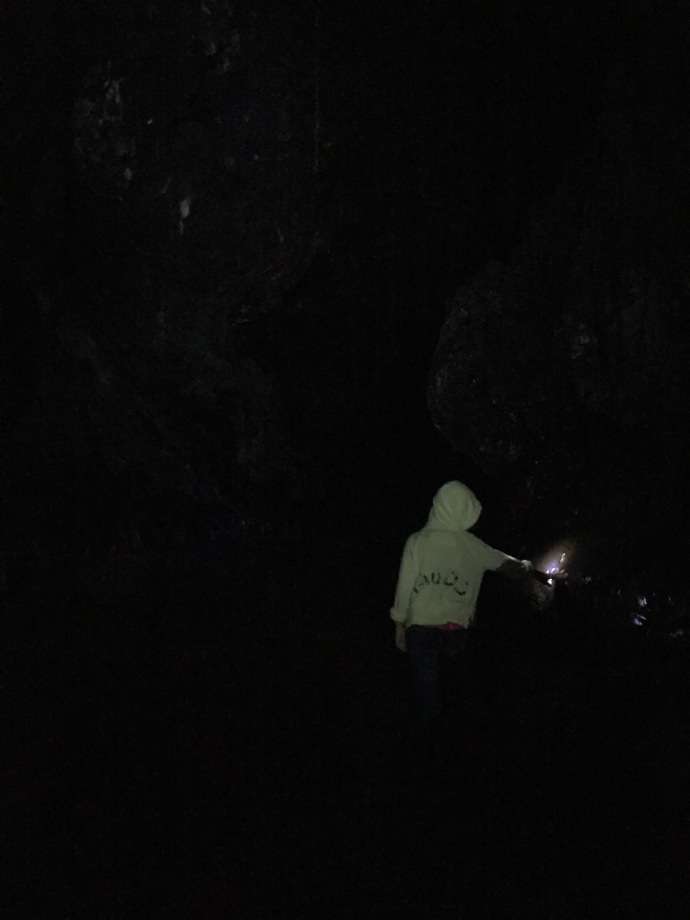 I wish you could see how huge this cavern is!

Eve being so independent climbing from rock to rock! She did so good! 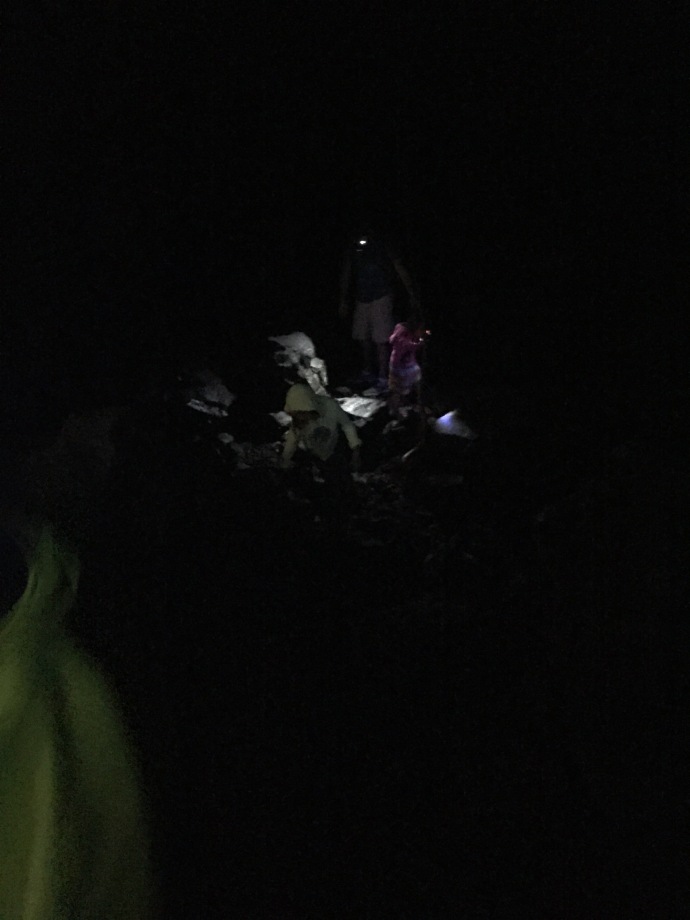 We were in awe and delighted when we saw light up ahead since we were under the impression that the was no way out except to go all the way back the way we came.  Caleb climbed out of this first skylight the rest of us climbed out of the second one. 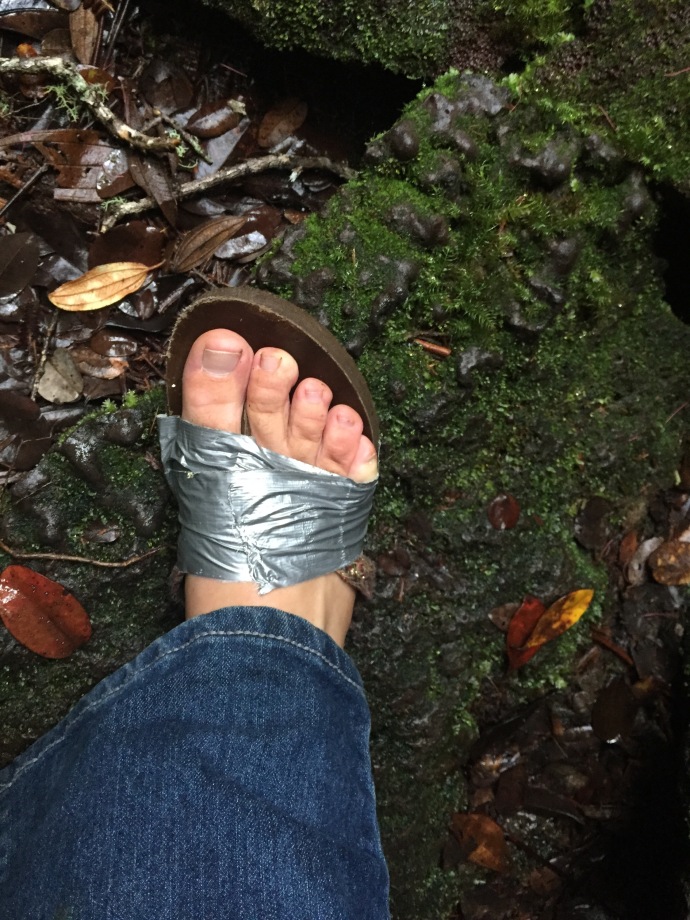 My slippers (flip flops) broke mid hike of the second tube, Chad came to my rescue with a small roll of duct tape from his pack. 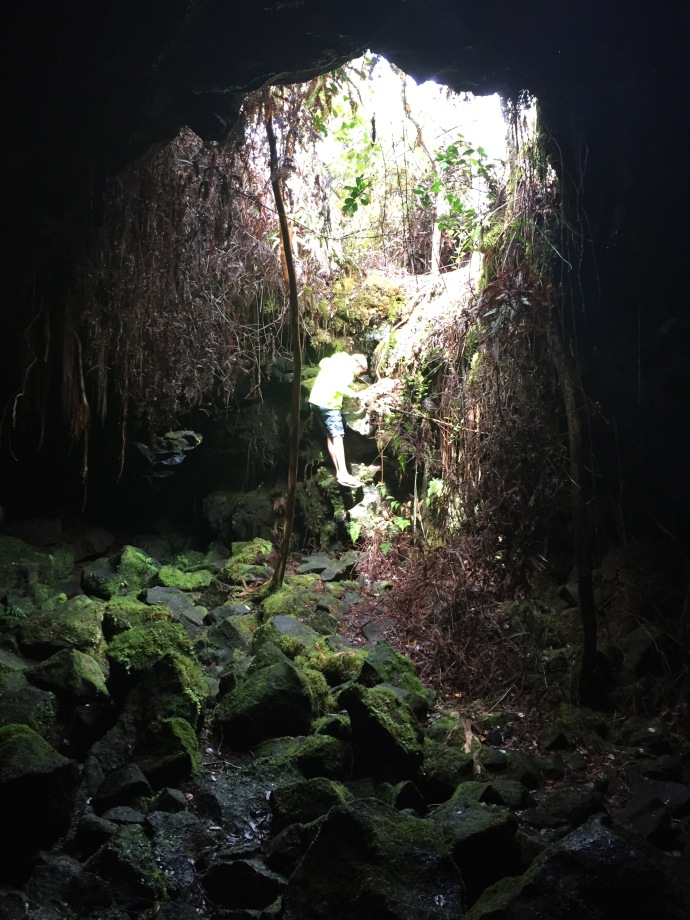 Eve emerging from the skylight.  We could have gone further Chad thinks but the entrance was small and we were ready to head back anyway.

There was a rough non groomed trail back towards our car and we opted to go back via the trail.  Eve wasn’t a fan, but we mostly enjoyed our hike through the Lehua rainforest. 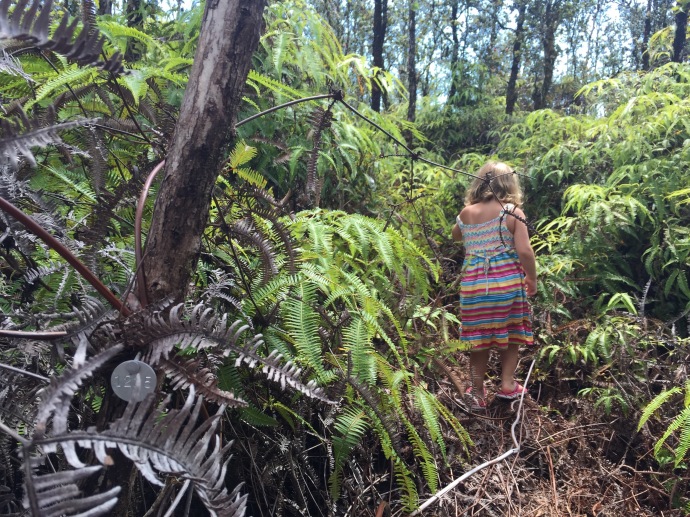 Due to my duct taped shoe, Chad ran into Safeway and got the fixings for our lunch date and then into Walmart for some new slippers.

We enjoyed making homemade pizza with Alana and Divad.  It was complete devoured before our settlers game was over. 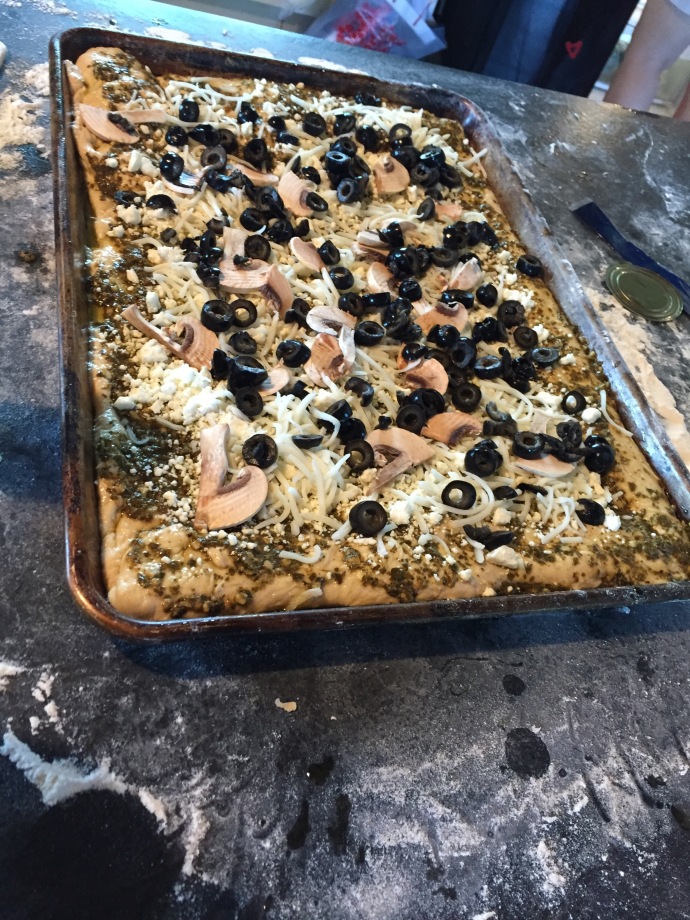 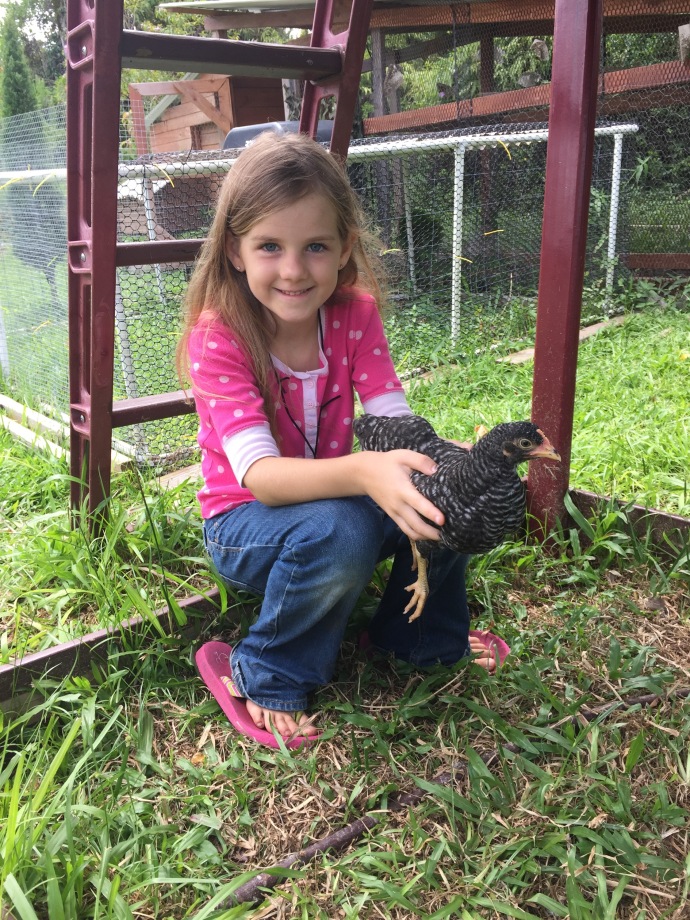 Hannah and Alethia were being chicken mommies loving on any chicken that they caught.

Alpha is so gorgeous! Such a handsome man!

The little ones played well together.  I loved how they incorporated their real life problems into their play.  Princess Elsa would declare she had to go potty ergently and it sounded like there was quite a commotion getting her to the potty in time.

Alana kicked all our backsides! 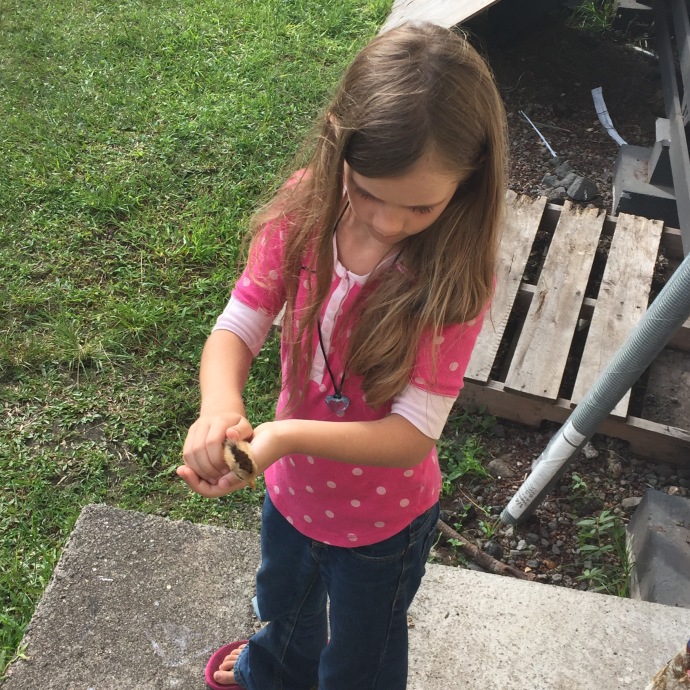 Hannah found a wild chick eventually we got it reunited with its mommy.

The chickens preffering the goats food,  the poor goat was eating as fast as he could.

I love it when the kids can experience any part of farm life.  And as you can see they love it too!

The boys started playing Rock Band.  I love to watch them, I don’t mind playing the guitar part, but have never been any good at it.  Still it brings back lots of good memories with my sisters and brothers-in-law.

It has been fun getting to know you these last four months Alana! Thanks for everything!