PCT Class of May 3rd

0400 Tiffany was up and in the shower. 0415 I straitened up the couch where I had been sleeping unplugged my phone sending out a mass text to my MIPs (most important people) well the ones who would be worried about me and my emergency contacts letting them known where we would be, what time we plan to be back, who I was hiking with and that I was putting my phone in airplane mode to save on battery.  I was quickly changed into hiking clothes.  We ate hard boiled eggs and peanut butter tortilla wraps for breakfast chugged some water and watched for Jay.  He showed up around 0445 and we were off.  I followed in in grandpa’s truck he calls The Boy Scout planting it at the campground in Morena Lake at the 20.3 mile ending we had chosen for this small section hike.  We checked in at the camp office and paid our $3/night X three nights imagining that we would be quite slow.  We then all climbed in Jay’s car and headed to Campo only 6.8 miles drive from Morena Lake.  Tiffany checked us in at the boarder patrol office like the PCT (Pacific Crest Trail) book suggested.  They acted like no one had ever done that before.  Oh well, we want to make sure we are being smart about this hiking through the desert 20 miles in the heat with no water source thing.  Jay got us as close as you can get by car unless you have an all terrain rig.  We could see the start.  We were so nervous and excited.  What had we gotten our selves into?  The trail marker and register were literally right next to the boarder. There were other hikers there so we took our turn to have a few photos together at the start.  Arriving,I believe, around 5:45AM. Tiffany kept saying, “I can’t believe we are hiking on the PCT! We’re hiking on the PCT!”

We also took one picture with Jay.  Thank you Jay for the ride!  The brown fence next to us is the Mexican border. 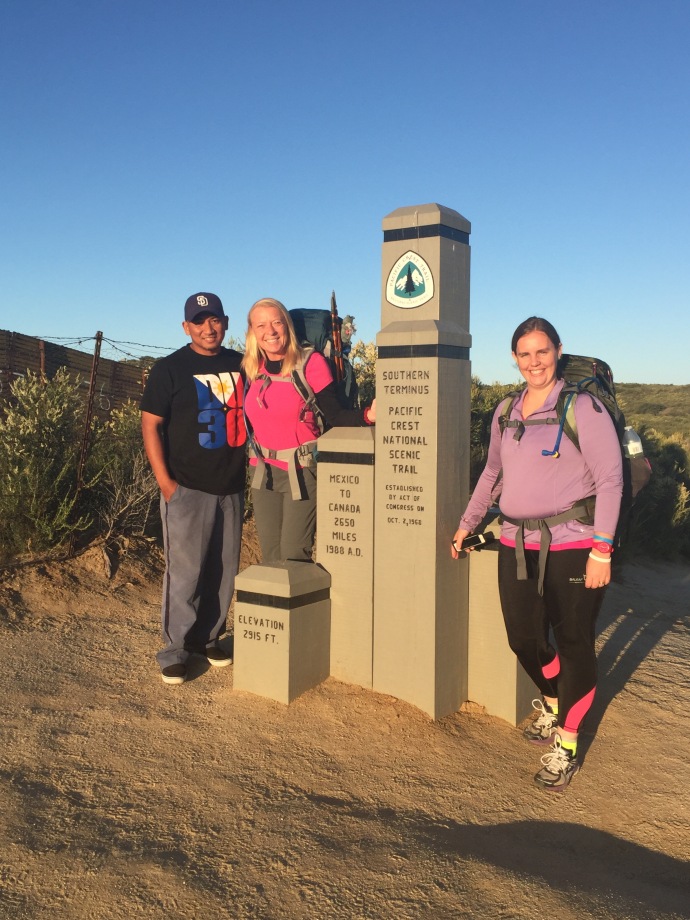 The view from the trail marker was gorgeous. 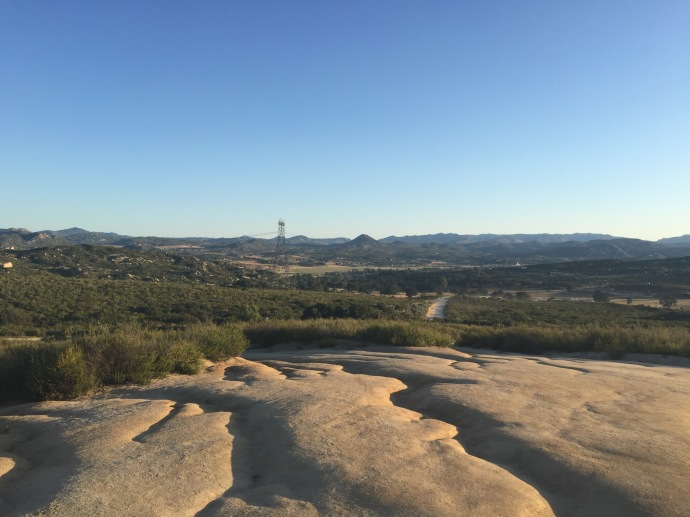 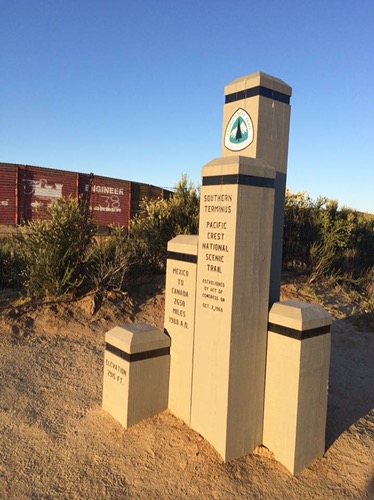 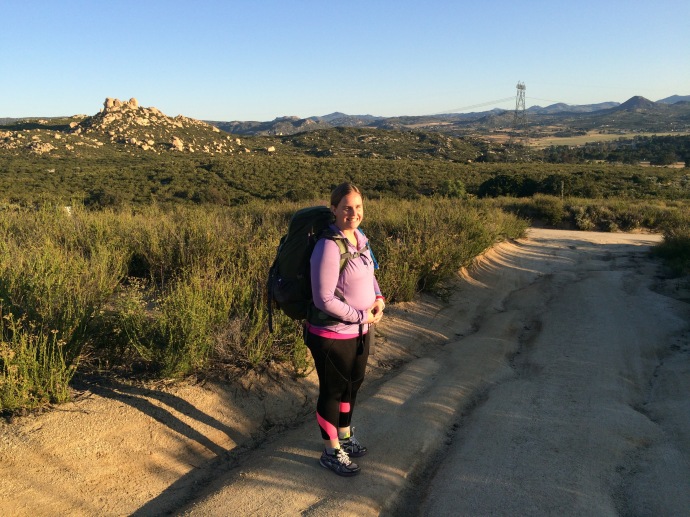 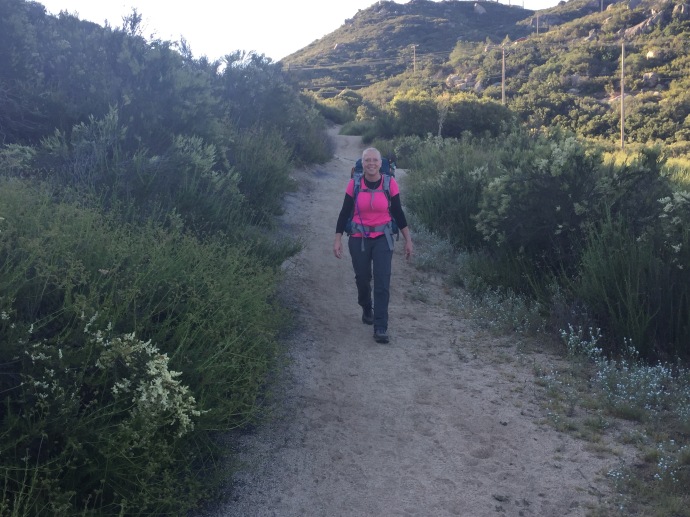 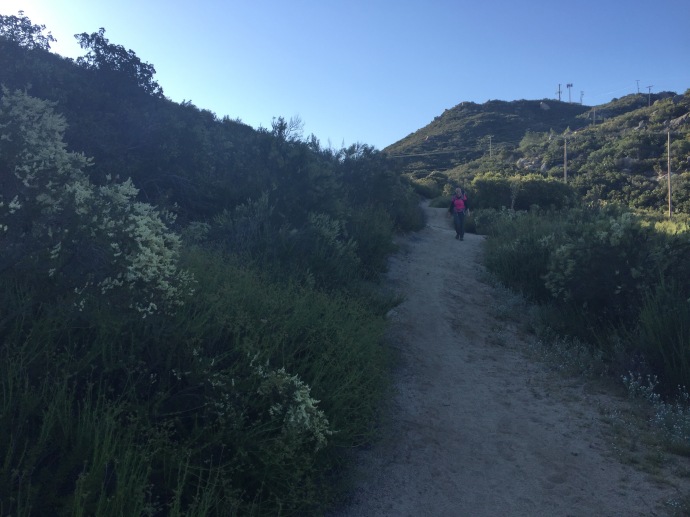 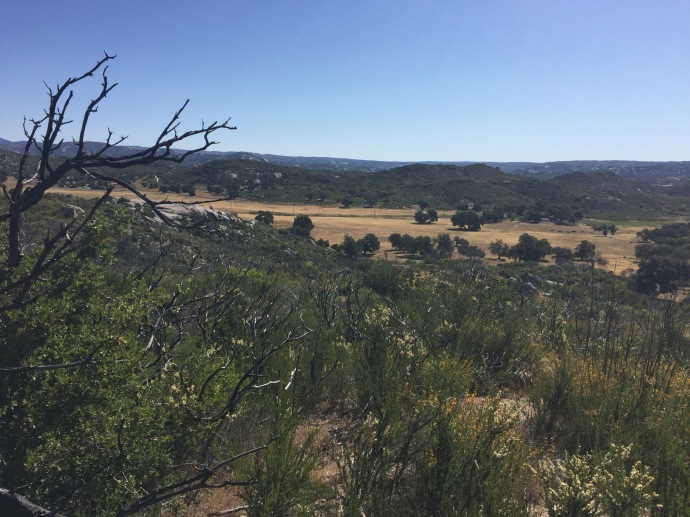 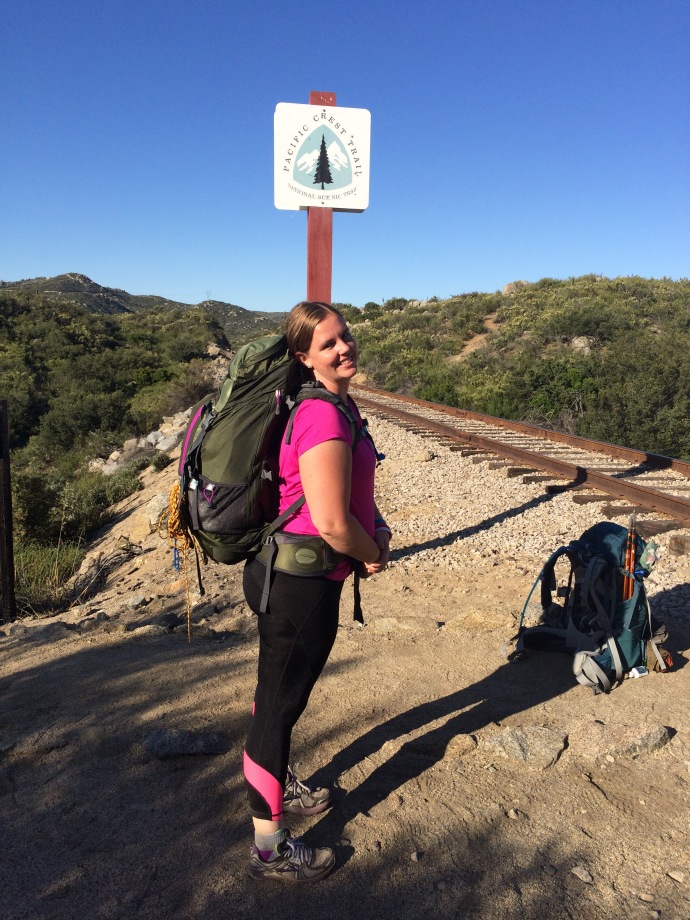 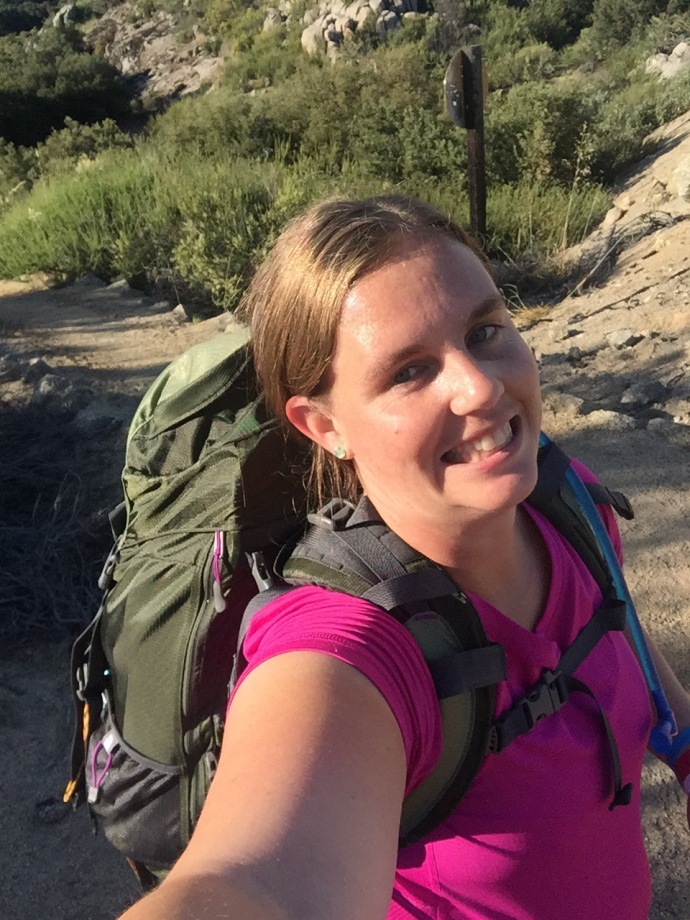 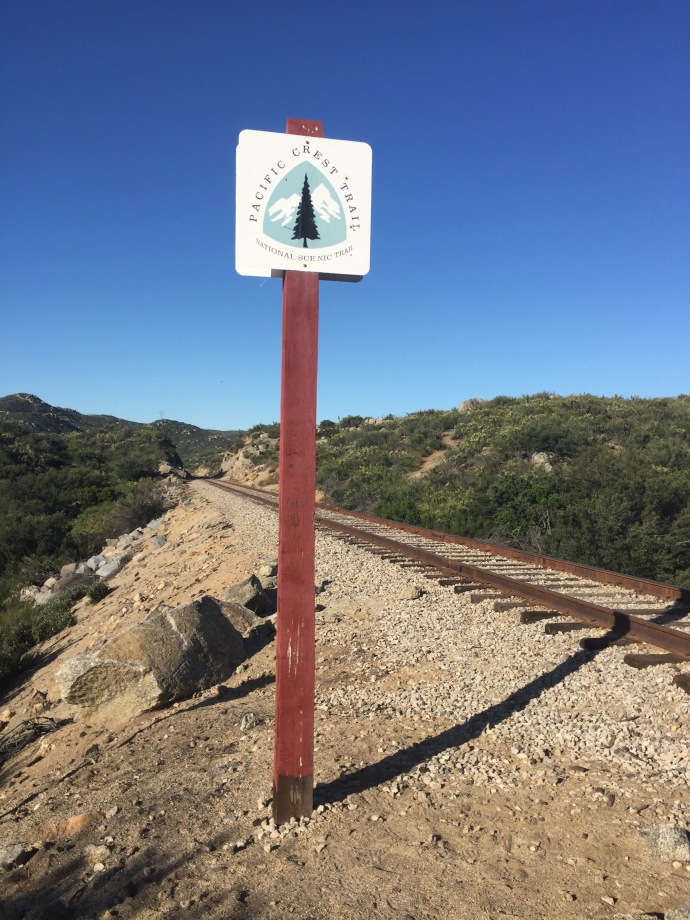 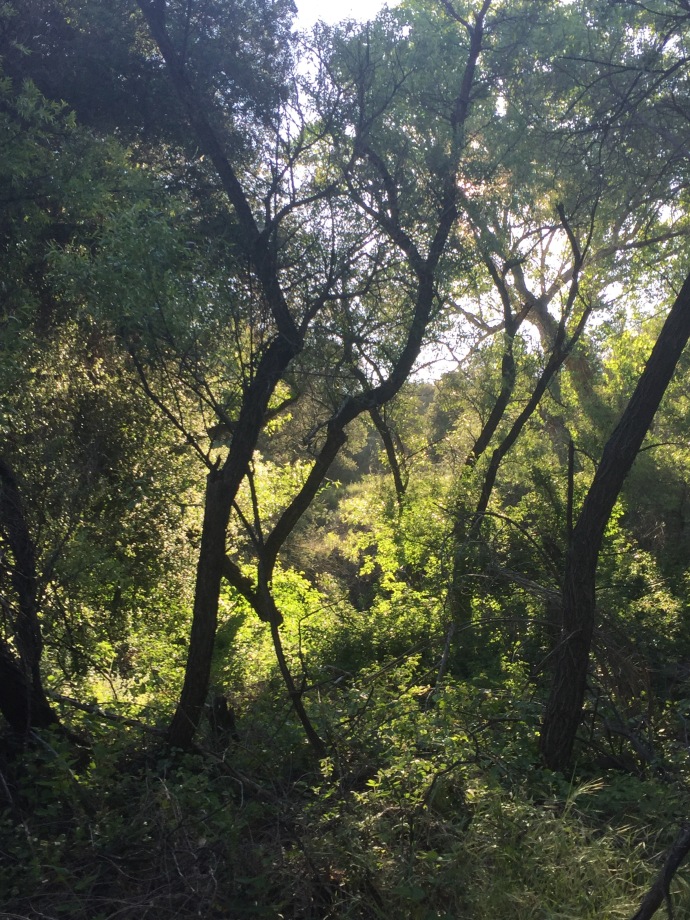 These pictures are going to be completely out of order because today the Blog is deciding on it’s own to put them in what ever order it wants and I don’t really want to fight it.  We were so surprised by how much shade and greenery there was.  Every plant was green and blooming and completely gorgeous! The shad still helped some in the heat of the day but we still felt every one of the 82-84 degrees in the sun working so hard with heavy packs on our backs.  One step at a time.  Out of our 5 liters of water (I had 5.5) we needed to save one liter for cooking and two for the second day.  We both ran out of our allotted two liters before we hit the 10 mile marker.  It was so hot and we were so thirsty.  We had heard the best camping place was around mile marker 15 at a place called Howser Creek. (Don’t be fooled there is not water there) we rationalized that since we were going over half way today we could use some of tomorrow’s water.  There was for sure water at Morena Lake.  My legs were so tiered for the descent into Howser Creek. I was fumbling a bit with each step.  Not because o was dehydrated or had heat exhaustion just because we had hiked a long ways with a lot of weight on my unadjusted legs.  Causing them to be a bit shakey.  I was so thankful for the walking pole that Tiffany gave me to use.  I decided that if I ever did get a chance to do a through hike I would need two poles.  I just don’t have good enough balance plus the addition of the pack making me top heavy and the tiredness of my legs acting like they may choose to just give out at will made me take tiny slow steps especially on the descent. 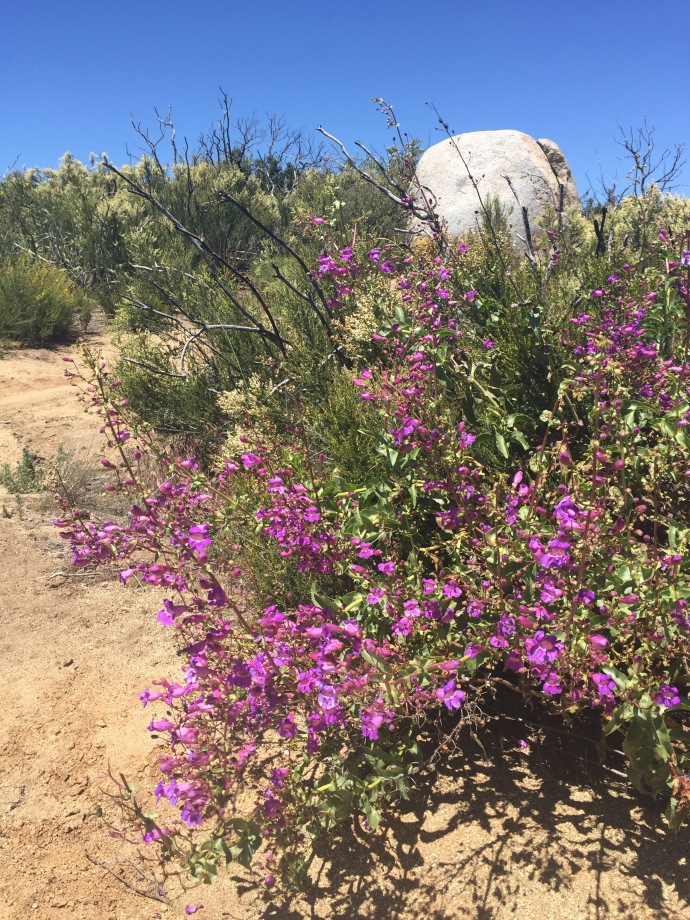 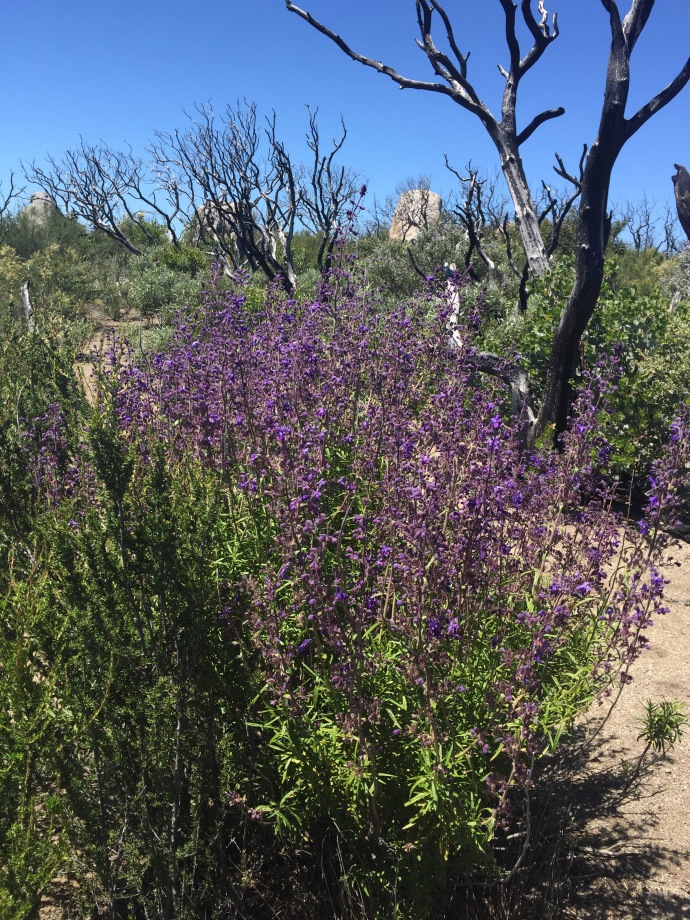 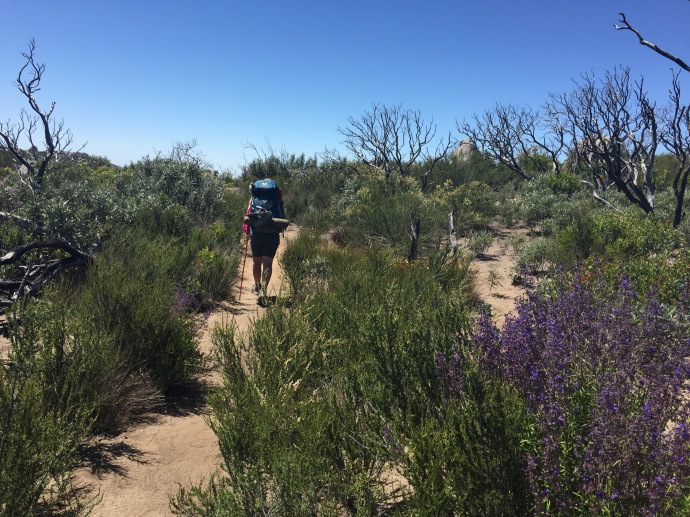 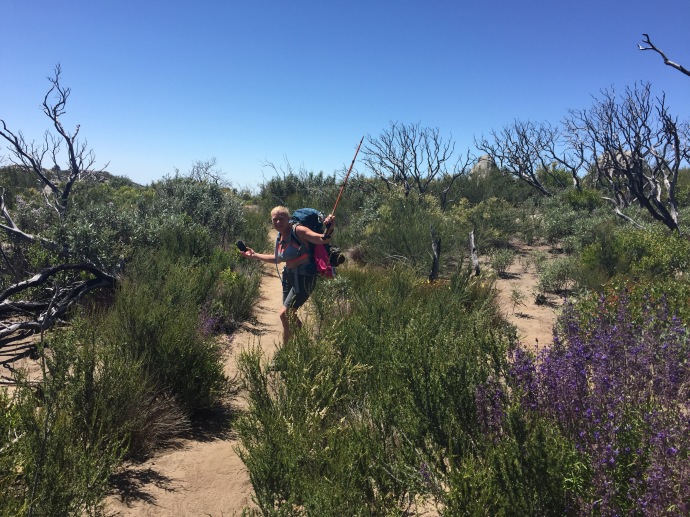 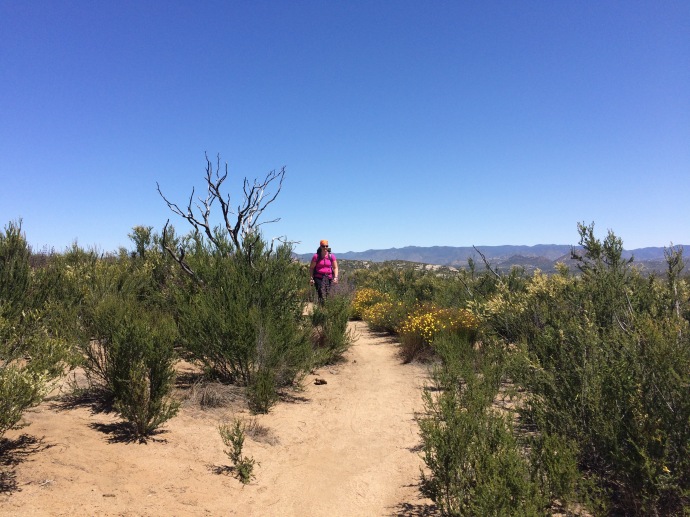 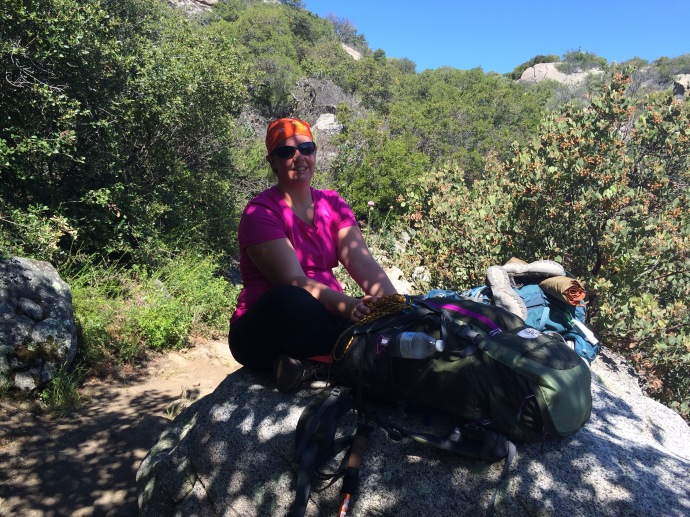 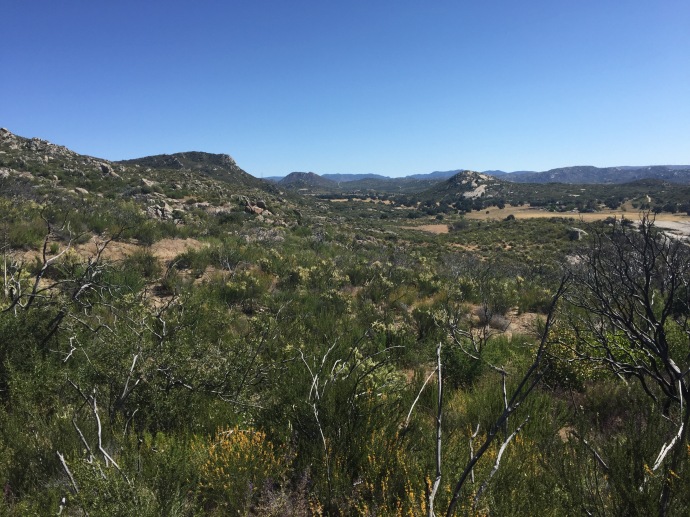 None of these pictures show the steepness of the trail as I wasn’t for pulling my camera out on those parts where I just needed to keep my momentum.  I stumbled into camp between 4:00 and 4:30 Tiffany was ahead of me a little ways and I could hear her talking to some of the other hikers.  I inflated the new air mattress and practically fell onto it maybe two feet off of the trail.  I could not move another muscle.  A lot of other hikers came by we estimate maybe 50 people started the PCT with us May 3rd we had no idea it would be so crowded. We felt completely sheepish saying we were stopping in Morena Lake when the rest of them were aiming for Canada.  We wanted to through hike it with them so badly.  After resting about 30 minutes I decide to try to move and I could not move my arms at all. Severe pain in my shoulders and neck warned me with every slight muscle twitch to not do that again.  Tiffany found my predicament hilarious.  She kept asking me if I wanted some of the snack foods she was having and for the most part I answered no.  Until she got to the Mangoes where I bargained that I would have some if she could throw it right to my hand, because my arms literally could not move. I couldn’t get up, or get anything out of my bag.  This must be a common hiker problem because one of the other hikers piped up with, “Oh, you have T-Rex arms” and that is exactly what it felt like.  It was so painful but I got them stretched outage well as my shoulders and that crazy pain and stiffness never came back.  Still I could not imagine what agony would be felt in the morning when I had to put that pack back on for the 1000′ elevation climb to get out of this Howser Creek bed oases. I took a short little walk to find a good bathroom spot making attempts to keep my muscles moving as to maybe not as sore tomorrow and they seemed to work.  This whole pooping in the woods business would take some getting used to.  Dinner was tasty we ate kind of early and we’re all zipped in to our tent by 6:30 or 7:00.  Ours was probably the nearest to the trail but in a grassy spot there were quite a few campers with in 50 yards of us and we all gathered on the grassy patch for dinner which allowed us to get to know the other hikers we were hiking with.  Three of them had recently hiked the AT.  Two girls from Portland were hiking the trail with thier corgi so they were doing mostly night hiking.  Several were international visitors with strong accents and a group of just post college age boys that all stuck together.  We enjoyed the stories from the AT hikers.  One of them worked at REI where Tiffany is from in Minisota he was helping the Portland girls learn how to take their packs on and off correctly and how to adjust them after they we on.  We listened and watched taking in all of this information.  A man brought a couple of two liter bottles of water for people who had underestimated their water needs.  He was a “trail angel” one who watches out for hikers in this area as he lived close by.  We did use some of the emergency water.  We could have made it out with what we had, but we were so thirsty it was hard to save our 1.5 liters (each) that remained for the hike out. One of the AT hikers who had earned the trail name last year of Yoda for often speaking like him asked me if I had Ibuprofen for my stiffness and I had to admit that although I had planned to bring some it didn’t end up making it in my bag from my work lunch bag.  She said, “do you have chapstick?”and yes I did have that.  I was waiting for some kind of weird soreness hack done with chapstick like I had experienced in cycling with Red Man chewing tobacco, but know she was proposing a trade. Ibuprofen for tonight and tomorrow for use of my chapstick.  She had managed to forget hers at the home she stayed in the night before.  I told her that I only had 5 more miles to hike she might as well keep the chapstick.  She handed me two 200mg tabs for tonight and one 800mg tab for tomorrow morning.  Now that, I thought, was brilliant!  If I get a chance to through hike I’m getting a prescription for scored 800mg ibuprofen tabs. I don’t generally take them until I really need them and that is a much more compact way to bring soreness/pain management with you.

I didn’t know until the next day that Tiffany had documented our exchange.  Yoda has a blog that I plan on following.  I so wish we did not have to stop but could keep on keeping on!