The first of our Victorville goodbyes

We must have gotten up extra early because we ended up having a lot of down time after we got ready and before church. It was a pot luck day at church and we were going to pick up something on the way to church since There wasn’t much in the house and nothing pot luck worthy. We drove a different route to church, we had talked about stopping at the Walmart on Bear Valley, but I think Chad was thinking we could find a grocery store that was right on our way we drove and drove, made it all the way to a sign that said “Old Victorville” through a part of town with bars on every window and still no grocery store. We circled back around and did see a restaurant that probably would sell whole pies, now it was too late to go to Walmart and get back in time. We headed into service kind of early with a plan that Chad would dart out after service and get a pie from that restaurant we saw. This is only the second time I have not been working and been able to attend Victorville Church of the Nazarene. (victorvillenazarenechurch.com). Chad and he kids have loved it and the two times I have now been have been great as well. The people are really welcoming and there is really a message. It is more like a bible study than the feel good phrases and short 15 minute words to live by that we have found to be the main offerings at larger churches we have attended. Having to interview for a new assignment every three months has brought to my attention that really we are always in an interview. This life is an interview for the next one. The sermon today was along the same lines. 1 Peter 1:17 talks about how He (God) will judge or reward you according to what you do. And 1 Peter 2:19 states that God is pleased with us when we do what we know is right and patiently endure unfair treatment.
We have received more than fair treatment here in Victorville which will make these next two weeks hard. Service neared a close and just as Chad was getting geared to run out the pastor made an announcement that no one was to leave that they were confiscating our keys (joking) if we didn’t bring food that was of no consequence the church had provided food and we were all to come and enjoy. Feeling a little guilty having not brought food (and I have never partaken in a potluck that I have not helped with provisions my parents will be cringing when they read this and find out how irresponsible I was, sorry mom and dad we planned on contributing) we made our way over to the gym and got in line. The kids took some of the extra time to play with their friends and say goodbye. Several people stated that they had enjoyed the kids and our family as part of the church and told us to come back any time. That is the hardest part of this job-leaving all the new friends we have made, every three months. I would love to promise that we will come back, we just never know where we will be. The hardest goodbye was for Eve. She has grown quite attached to her Sunday school teacher Miss Brittany. We took a picture of the two of them and promised that we would help Eve send her a post card from Hawaii. 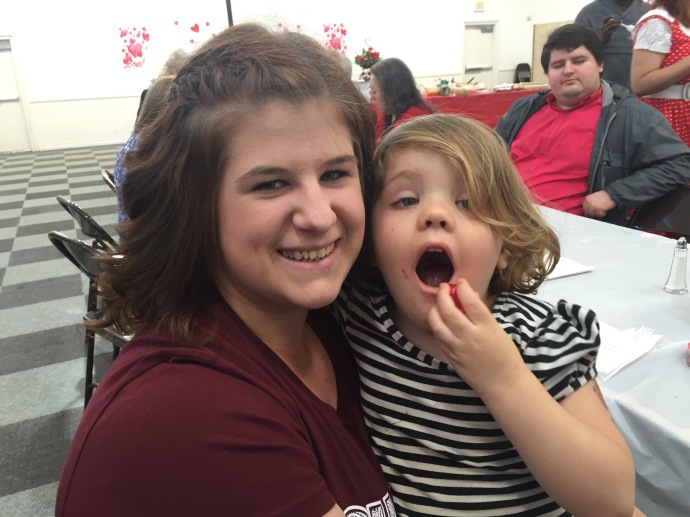