We did our time at the police station today

I so enjoyed my bili baby and attentive parents last night. I then took a much needed morning nap before dragging myself out of bed, shower to wake up, and coffee to turn my brain on. We had made big plans with Uncle Richard to tour his work the San Bernardino Police Station.

I didn’t take too many pictures mostly because I didn’t want to photograph something I wasn’t supposed to. We met long time co-workers from the office (He has worked there for 24 years) saw his office where I found this gem of a picture.

It is a picture of Samantha (his daughter now 20) in the years when she would come to live with our family in the summer in Cambridge Idaho here showing a sheep for 4H. She was (still is) so darn cute. He gave each of the kids a goody bag of SBPD information, pencils and other gifts. We then toured each room as he told us about the department and how it ran. I particularly liked the 911 call center as the lady who was telling us about her department handled several calls while we were there talking to her so we really could get a feel for how it all worked. She was telling us the longevity of employment as a dispatcher is, on average, five years but she had been working there for a long time. I got the impression that she had been there close to as long as Uncle Richard. It is not surprising to me due to the amount of stress and trauma one could experience in a job like that especially in a big city with a high volume of calls and incidences. The interview rooms had a different feel about them, the kids one was warm and comfortable, but it is so sad that they even have to have one of those. The kids favorite part of the tour was the SWAT truck and van (looks like a motor home). 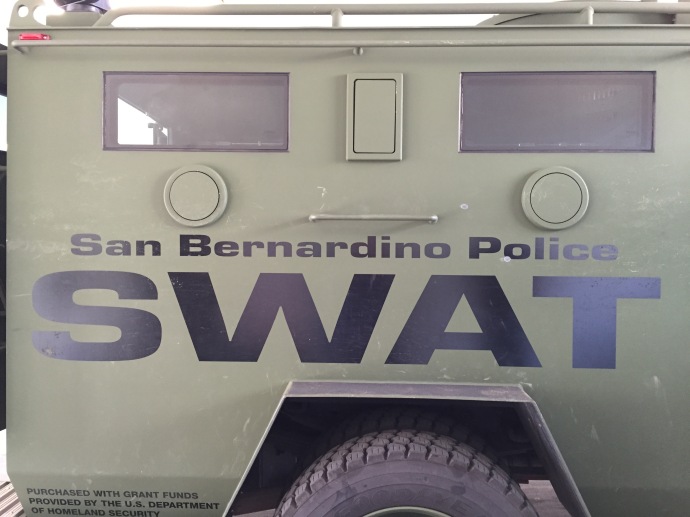 the doors were soooooo heavy due to the thick bullet proof metal and three inch thick bullet proof glass. The battering ram, stretchers and multi launcher were very interesting to see in person. I liked the incidence management brief case (not really it folded out flat) that had a white board and other brainstorming and planning resources. It looked much like the one my basketball coach carried around in high school that spelled out the logistics of our plays, so everyone was on the same page. The -you go here, you go here, we will be moving in these directions and pull it off in an orchestrated fashion- board. Team work is a beautiful thing. Often after those crazy crazy days where we nurses truly feel the fragility of life and the weight of its balance in our hands I wish there was a way to truly explain what it is like to be the nurse. I believe being a police officer (fire fighter or paramedic) is much similar— if only you really knew what my day was like. Well it wasn’t the same as being the officer on “those days” but all the same we learned a lot and have more of an understanding. Police have had a lot of bad press lately, I have my own theories as to why that is, but daily they put their lives on the line for us. Often they have to defend their every action and endure being spit at, called names and other such disgraces yet they still continue to show up to help when we call 911.

From the police station we made our way to Moreno Valley which was incredibly green and Beautiful. The sun coming in the window was hot even with the window down. Tank top and shorts would have been more appropriate clothes for the weather but my long sleeves and jeans would have to do. In Moreno Valley we visited a new friend we met at this assignment named Hiedi. She has four little dogs and a kitty that the kids took turns petting and kissing. The poor cat wasn’t sure what to do with all these little kids and so she/he tried her/his best to hide. We got back into town (San Bernardino) in time to have dinner with Uncle Richard before heading back up the hill. The kids have been talking about how much they liked learning what a police officer does and the police station. Hannah thinks she might consider it as a career some day. Caleb would be sold on it if he could drive the SWAT rig as his patrol car. Thank you Uncle Richard for the tour and fun educational day and thank you Hiedi for letting us come out and meet your doggies.
This is the day that the Lord had made let us rejoice and be glad in it!!!