Posted on September 20, 2014 by theowenscrew

7:30 felt like sleeping in after the previous three days of 4:15am wake up calls. Eve came and crawled in bed with us and in her normal way was not still. Soon we were both wide awake with no hope of a little more shut eye. We all got dressed and ready for the day and had our breakfast. On Myra’s walk this morning we ran into an older couple with a miniature husky malamute who asked if the Portland on my shirt was for Portland Maine or Portland Oregon. I answered, it was for Portland Oregon and that we were from Salem. That prompted them to tell me that they go to Bend every winter kind of snow birding. They enjoyed the 40-50 degree winter weather in Bend while their family here sends hate emails complaining about the -30 degree weather in Wisconsin. They enjoy the “warm” weather and still are able to ski with Bachelor so close. It really is the best of both worlds. Do you hear that Oregonians…we snow bird to Arizona or Southern California and Wisconsinites feel like it is snow birding when they come and spend the winter in Bend. They were a very nice couple and I enjoyed our it’s-a-small-world connection.

Having only one car has only felt inconvenient on occasion, but it does mean that sometimes we have to strategically plan our week so that errands, especially those with deadlines, get run on days when the car is available. Today we had quite a list of errands mixed with a few fun things that we needed to be out of the house for. We started at the outdoor store to get some pepper spray for running (Myra can only go so far with me). We found it at an outdoor/active wear/sports store at the mall. Then we decided to take a slow stroll around the mall. It is fun to people watch and we did have a few clothing items on the need-soon list. We were super happy to find a very clearance swimming suit for Hannah for $3.50 at Crazy8 her old one was so stretched out that it no longer covered her properly. We found a few items on the clearance rack at Sears that were on our list. Two shirts for Chad $5 each and one for me at the same price. Two of the major things on our list we didn’t really find, well we did find shirts for Eve to replace her amazingly stained set at home but I don’t really feel like $8 is a true clearance price so we passed on the ones we found and as for jeans for Caleb even slim jeans are so big around his legs that only skinnies will do. At a very hard to find size of boys 14s we have come up empty handed every time. Children’s stores stop at size 12 and we have been unable to find skinny jeans in his size at department stores. We are not desperate yet he does well with what he has but it is crazy how difficult it is to find nice clothes in this middle size(between child and teen) for boys.

We had a late lunch but it was worth the wait. Chad has been craving Chinese food in all shapes and sizes this last six months so I had asked some of my patients what their favorite Chinese restaurants in the area were and now we get a chance to try them out. The food was quite good.

After lunch we headed to Starbucks parking lot. We went in and bought a lemonade ice tea to share then sat in our car watching a Les Stroud video of building a home in the Canadian wilderness that is completely off the grid. It was over an hour long but for the most part all five of us were completely transfixed with brain wheels turning as the whole family kids included worked on this project together.

After our “drive in movie” (hey we were in the car). We headed grocery shopping. The kids did well and it was actually fairly relaxing. Hannah manned the cart and as she was putting the groceries on the conveyer belt at the cash register (the other two were helping as well) she announced in a nonchalant manner that she felt like a grown up. Sometimes I look at the kids seeing how much of little rag-a-muffins they can be and get all worried about them not looking put together or at least well cared for and not homeless. The truth is they pick out their own clothes and comb and do their own hair most of the time. It looks like an amateur messy job to most but, hey, they are learning and feeling confident and independent, they are taking the initiative and striving to grow in their new life skills. By lovingly guiding, helping when they ask instead of taking over and doing it for them we are allowing them to mature and be responsible it doesn’t matter if other people think they are little ragamuffins.

We all made it home in one piece. Hannah tried on her new swim suit for us. She is so pleased with it. Then the kids ran out and played with the neighbor kids until dinner. Chad made some of the most beautiful margarita pizza ever and believe me it tastes better than it looks. 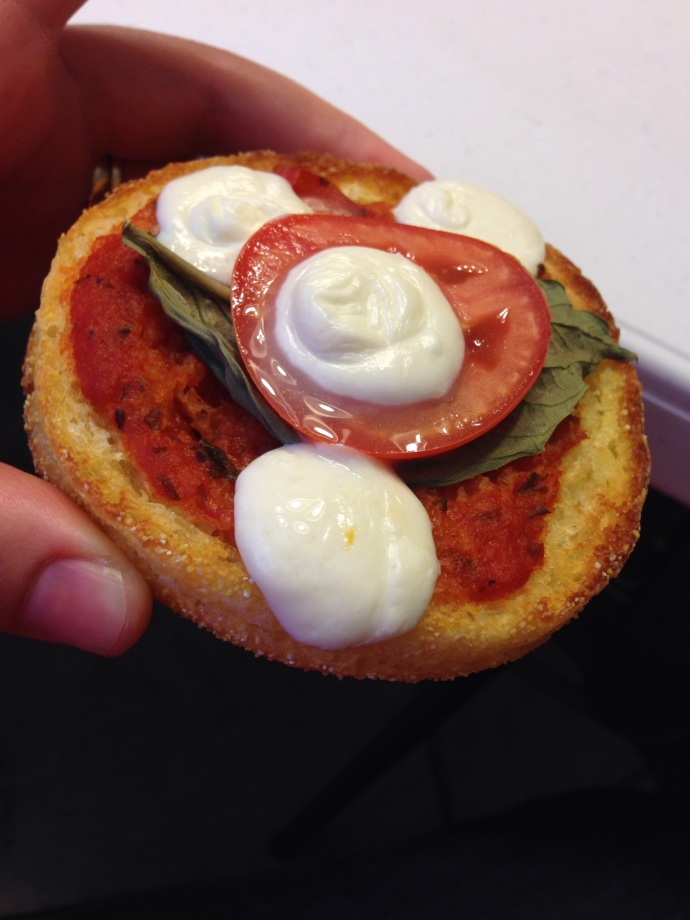 It definitely hit the spot. We are truly blessed.

On a more somber note (being away from home we were totally oblivious the the extent the disease had progressed) one of the beautiful young couples in our home church with two of the most gentlemanly boys both in early elementary school have been on the prayer list for years for a brain tumor that the wife has suffered with. She was in my BSF group although we have never been close I taught her boys in Sunday school. The progression has seemed slow and surgeries and treatment seemed effective, I hadn’t really heard much about it until today when her prayer page on Facebook had an update stating that she had been moved to hospice and they are preparing for her time on this side of heaven to be over soon. Please be with me in prayer for her, her sweet family especially those young big hearted boys, and for peace for all involved.