Posted on September 13, 2014 by theowenscrew

Driving from the tip of the mitten to the cuff Lansing is smack dab in the middle. 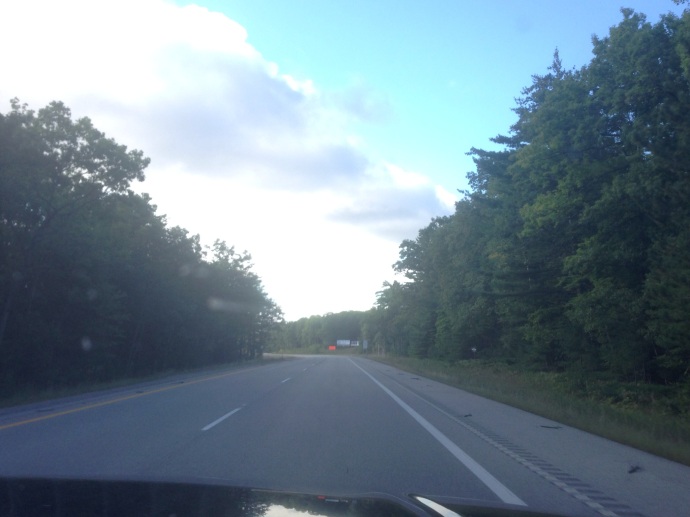 We saw some fall colors here and there not as much as I had hoped and we passed it all while we were on the freeway and I was never quite fast enough with the camera, still, the foliage was beautiful. The Capitol was very accessible and parking was easy to find. 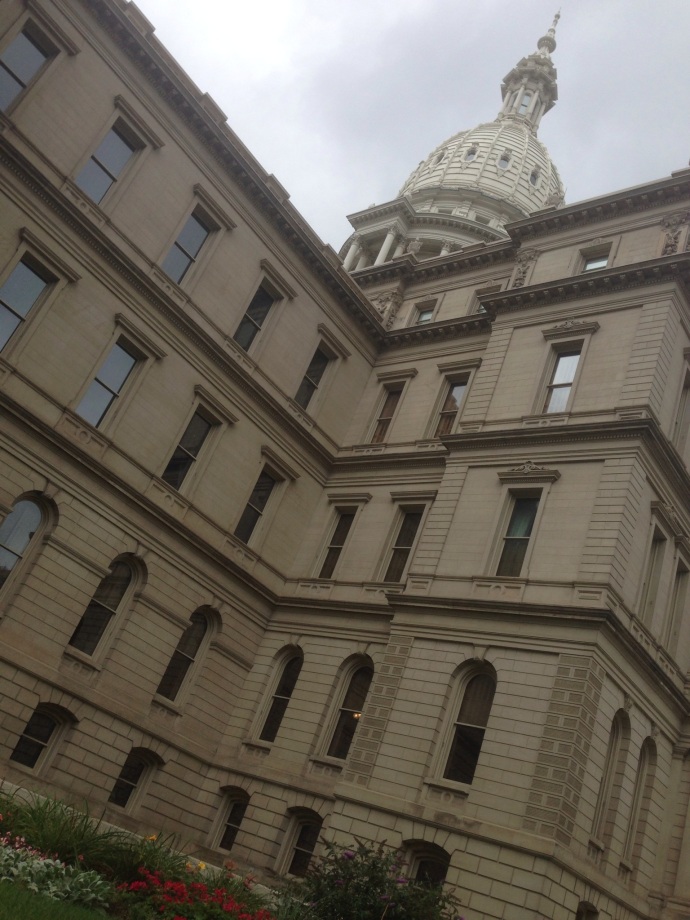 We got to there about a quarter after the hour and thought we had to wait until on the hour to take the tour, but come to find out unlike the other capitols we have been to they have books that are a self guided tour and then you return to the tour counter and they answer any questions that you have that the self guided tour book did not answer. Chad made a good tour guide and It was really nice to be able to see the Capitol at or own pace.

Michigan is the Dave Ramsey Capitol. They did levy a tax to pay for the building but they were very conservative with their funds. The marble in the building is actually cast iron and plaster painted to look like marble, the dark walnut is pine that is stained really dark, the walls are hand painted and textured stucco the gold
Is mostly just paint all though the stars in the top of the dome are gold leaf and platinum.

there was fossils all over in the limestone flooring. 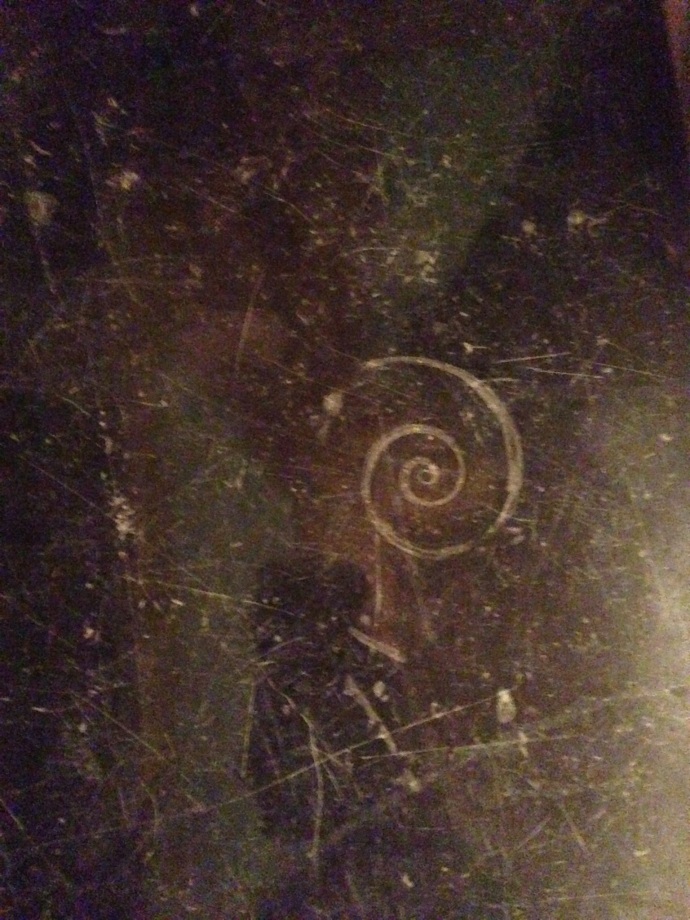 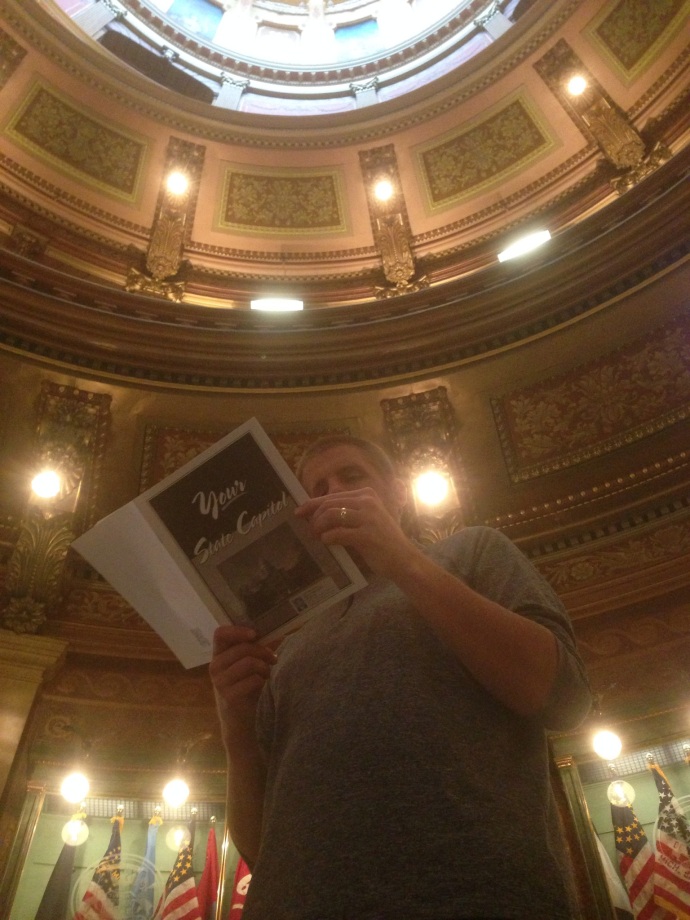 For the tour we were encouraged to lay down on the glass floor and look up at the starry night dome.

I loved the flags that completely surround the first level of the rotunda. 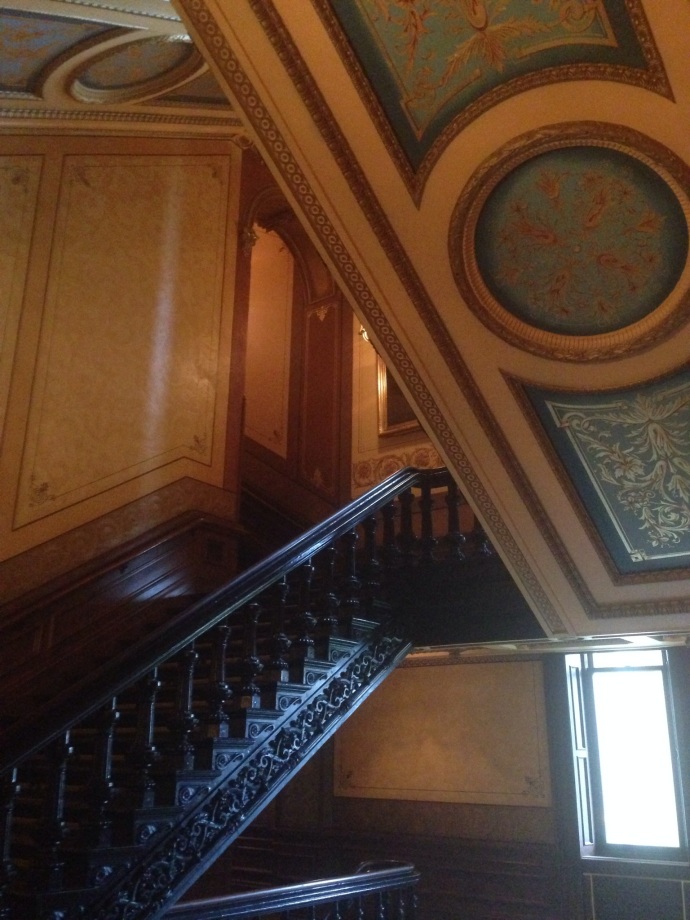 The building, house and senate were all quite beautiful and to think that it was built for 1.4 million 1/3 the cost of the other Capitol buildings of it’s era. The other two Capitols built by the same architect are Texas and Colorado. I found this quite interesting because the Colorado Capitol is so awesome because it is all made from Colorado materials and Michigan is awesome because of it’s theme of making a classy beautiful building on a conservative budget.

The etched glass was awesome, there was a pane for each state. 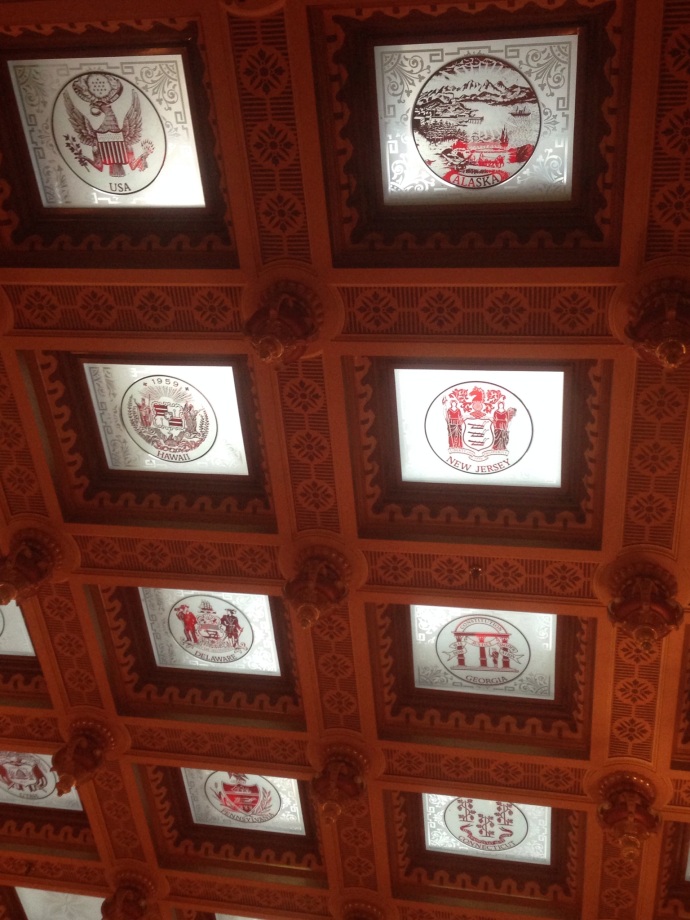 All of the door knobs have the state seal on them. 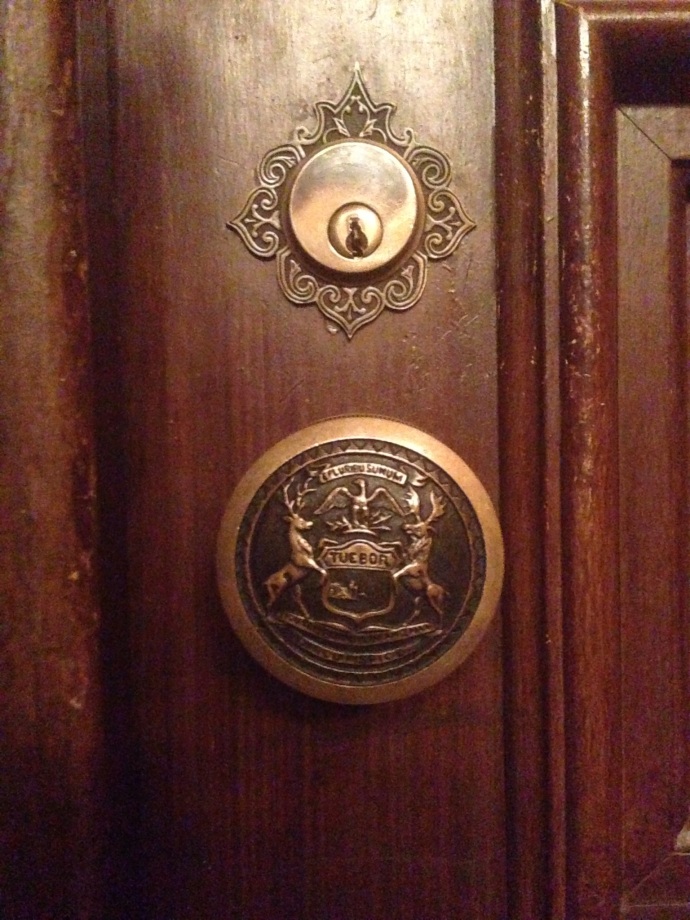 The Supreme Court was pretty awesome too. I loved the carpet. 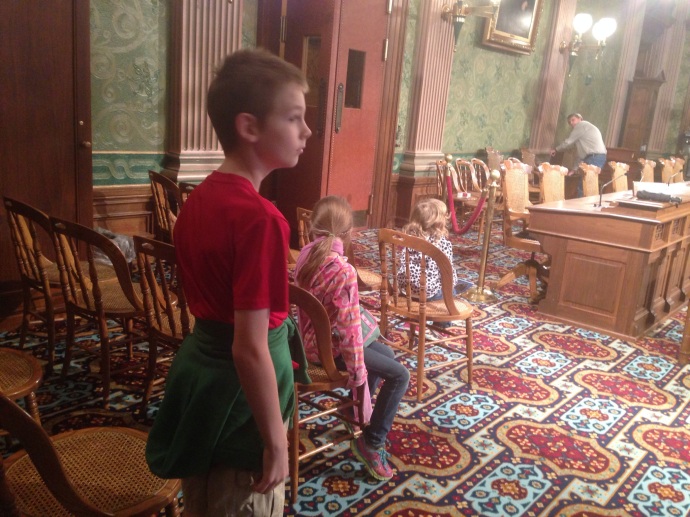 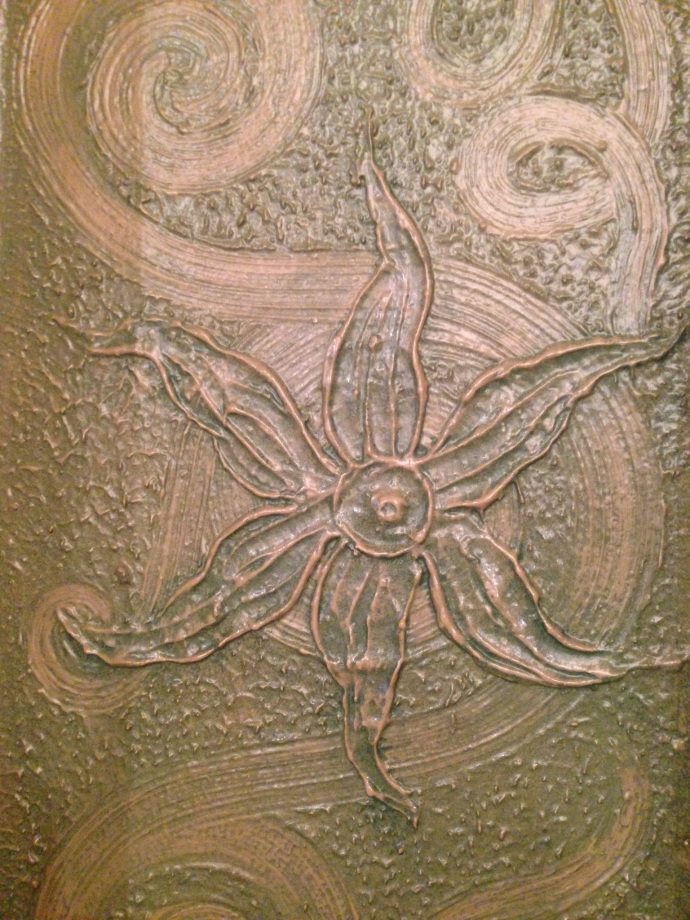 </a The youngest governor in American history was the first governor of Michigan at the young age of 24. 24!!!! That sounds crazy until you find out that he was the territorial governor before that at the ripe old age of 19.

He died at the ripe old age of 31.
Being so close we wanted to see Lake Erie and maybe stay in Detroit so we headed East. Then we decided although we were only maybe 30 min. Out of Detroit it was Friday rush hour And those big cities are never as fun as you think they will be. So Around Monroe Chad, keeping his eye out for a park to eat dinner at, spied a sign for a national battlefield. It wasn’t far so we decided to check it out. It was a National Park. Our first since Chimney Rock near the New Mexico Colorado boarder. We stamped our past port book and then looked around as we waited for the fiber optic light up map presentation on the war of 1812 and more specifically the battle of river raisin. I don’t think I realized before this trip that the war of 1812 was the British taking a second attempt in taking back this country back. After the revolutionary war they never truly left they just went farther north and kept their strongholds in the Great Lakes. After the light/map demonstration the ranger encouraged us to try on the dress up clothes as part of our learning experience and then he took a few pictures for us. Even though at that point it was after 5pm and he needed to close. 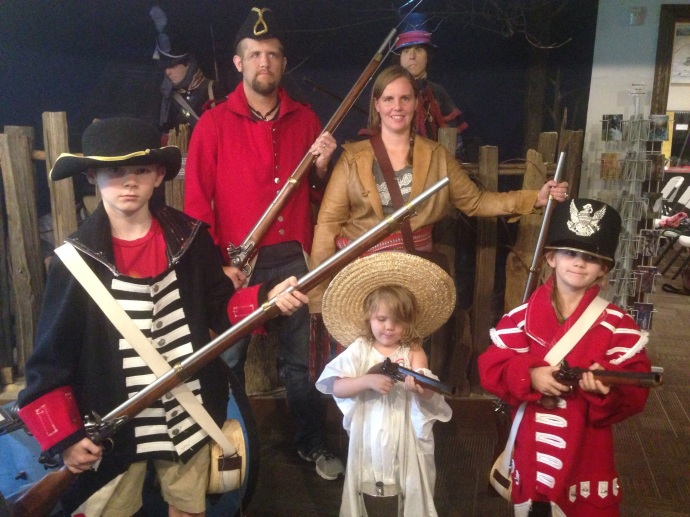 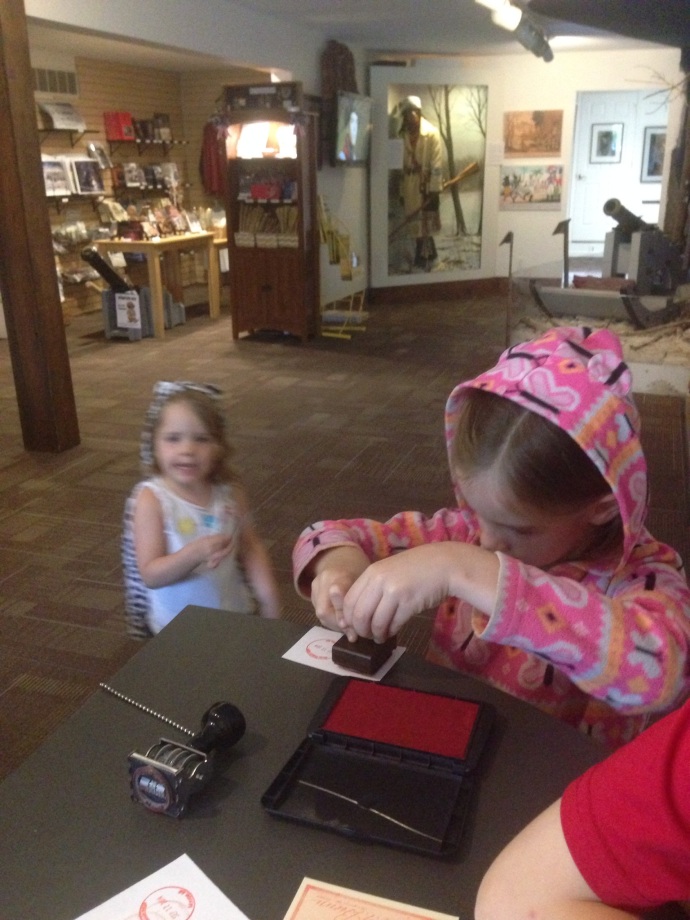 The park outside had a lot of signs that told details about the war. 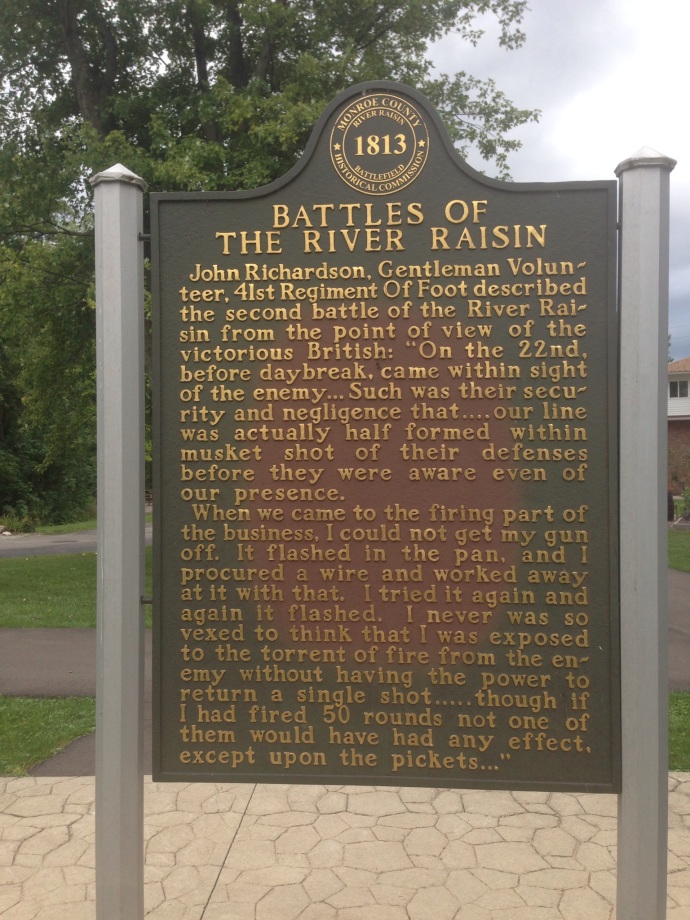 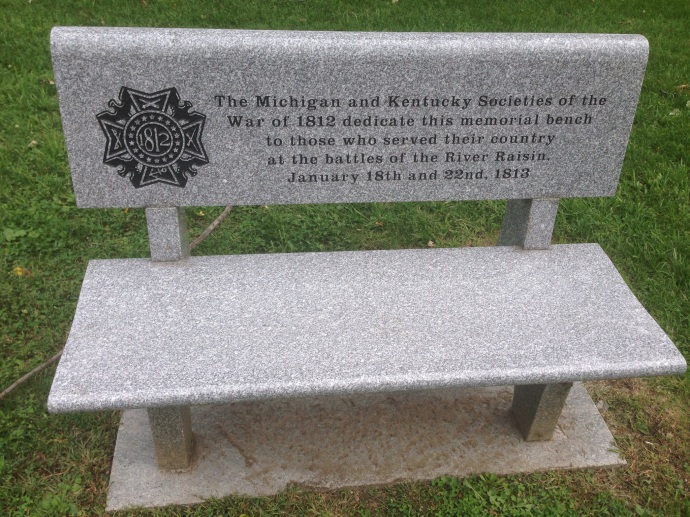 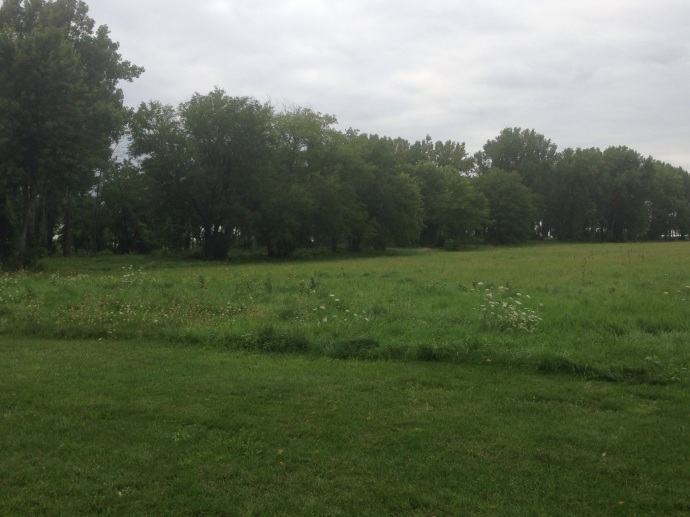 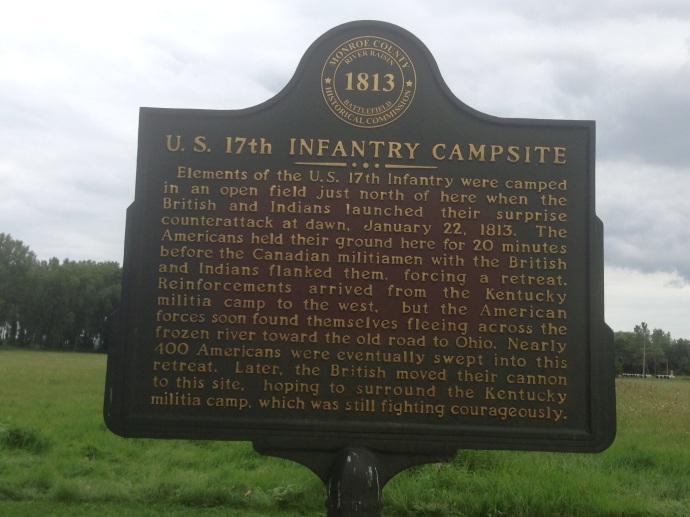 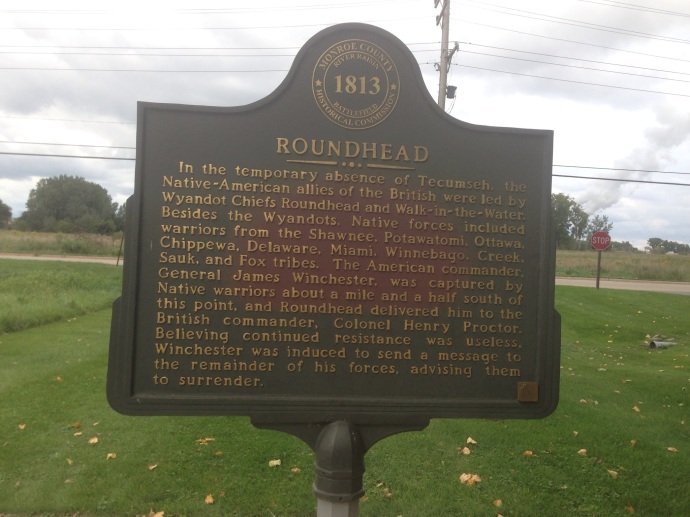 So I guess it’s Toledo for the night… 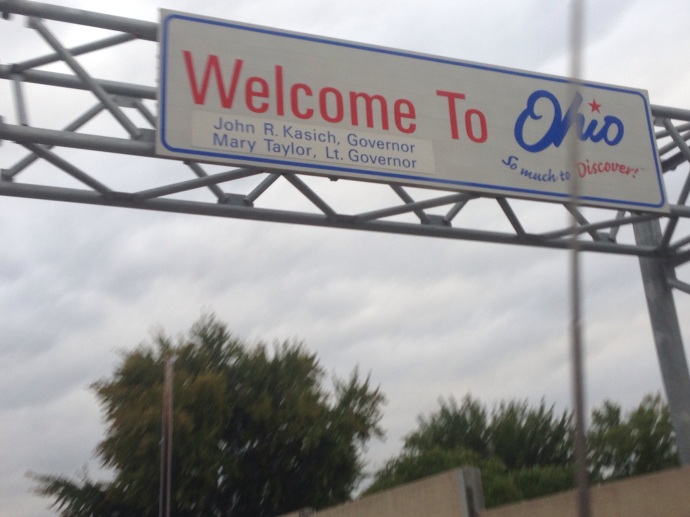 We did see Lake Erie but no public parks to get out and enjoy it. I didn’t take pictures of the blue between the houses. It looks pretty much the same as Michigan and what we saw of Huron.