Posted on September 12, 2014 by theowenscrew

Mackinac Island is located in the Michigan straits (the water ways that connect Lake Superior, Lake Michigan, and Lake Huron. It technically is in Lake Huron albeit the very tip. It was our first view of this lake. We came across the Mackinaw bridge that connects the UP to Mackinaw City on the mainland. 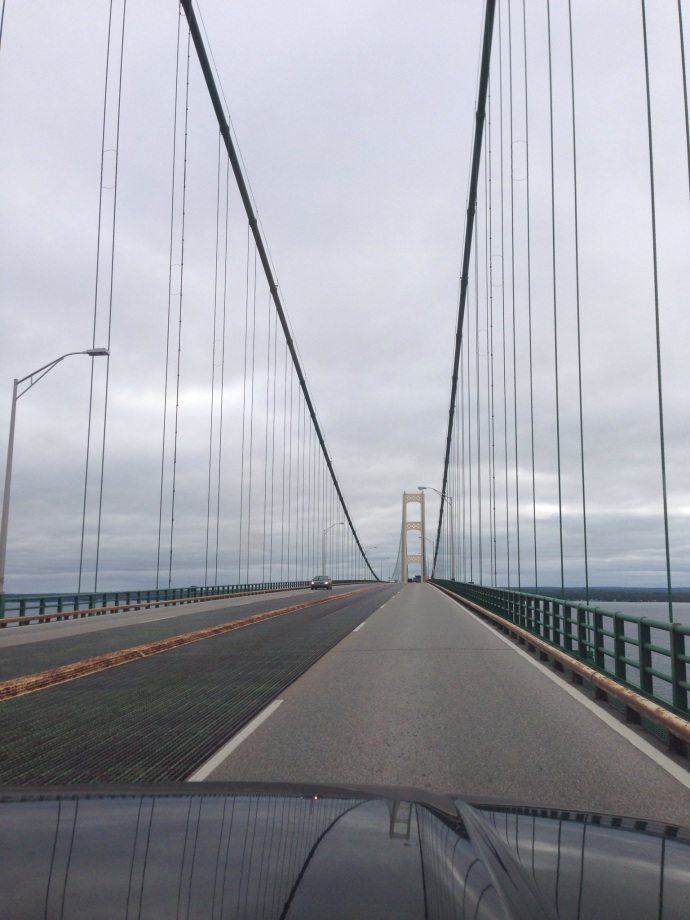 Mackinaw City is home to Historic Mill Creek Discovery Park and Colonial Michilackinac (set up like an old fort and who identifies it’s self with the motto “My, how times haven’t changed.” As well as a number of unique attractive lighthouses. We don’t exactly have the time or money to stop at all the historically significant locations and seeing all of these sights it makes me want to find a UP or Northern Michigan assignment sometime. We only could pick one for the day so we chose Mackinac Island. It was afternoon when we got to Mackinaw City leaving us less time on the island than we had planned. We purchased the ferry tickets not remembering we had moved into another time zone and we had even less time than we had thought, but honestly us Oregonians were freezing the weather had all the suddenly dropped from the seventies to the forties over night. The day time temperature was hovering at 48 degrees with a breeze that felt like it was coming strait off of a glacier so we weren’t dressed to walk around in it too long anyway. 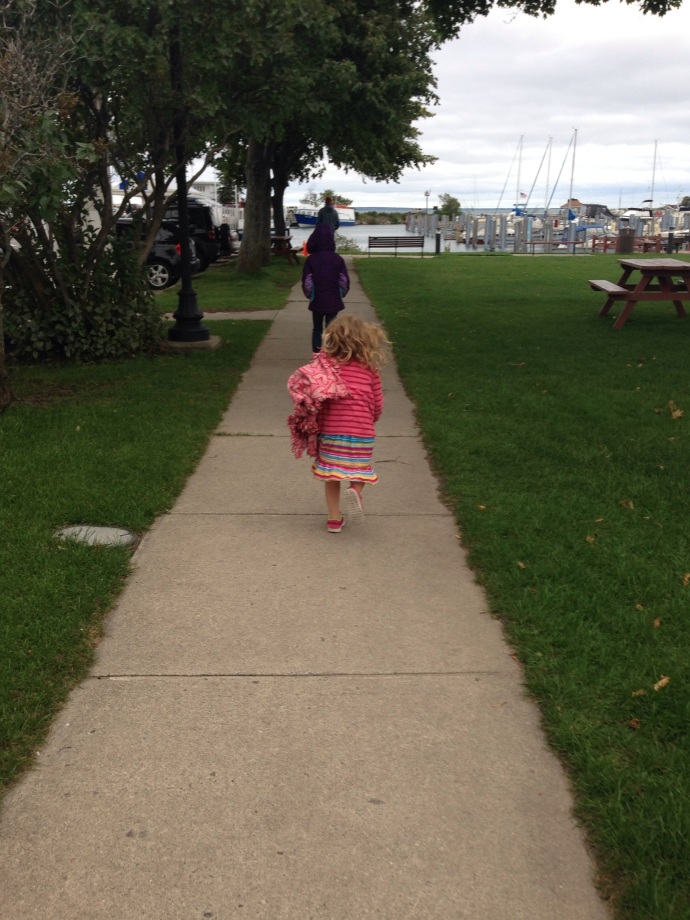 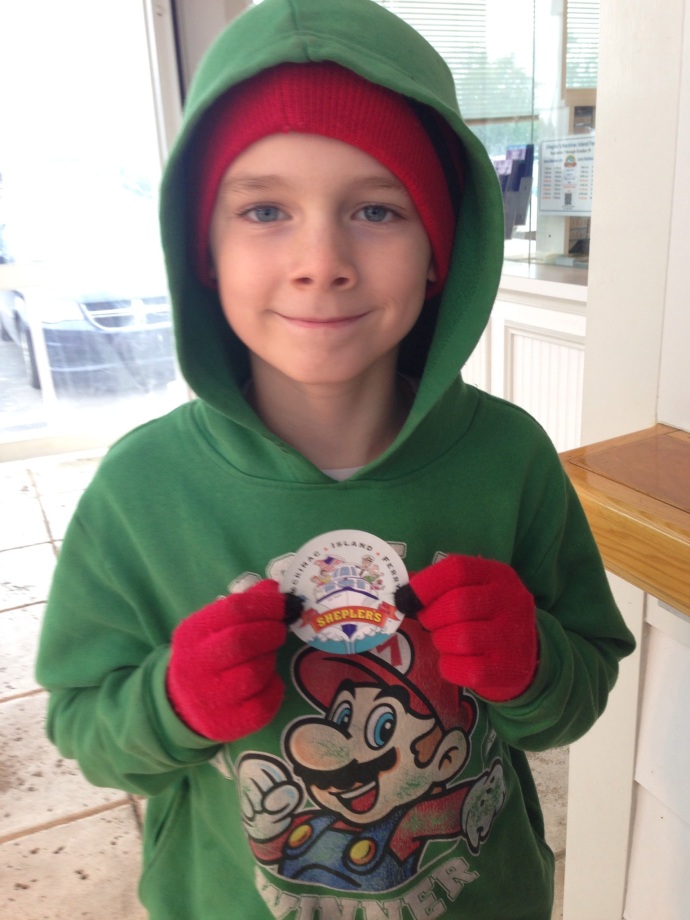 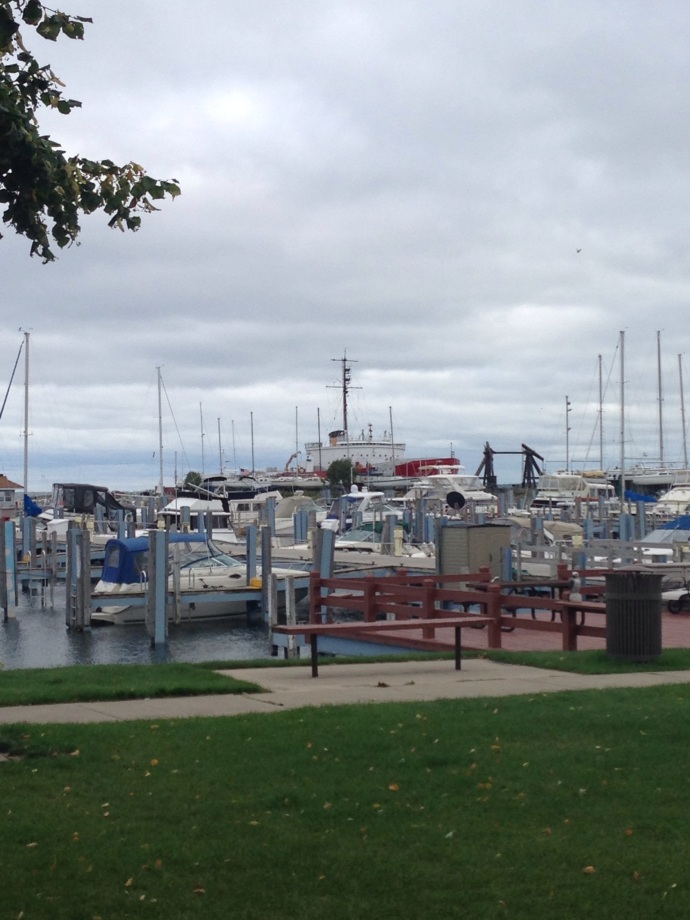 Mackinac Island is approximately 3.8 square miles and has an eight mile perimeter and what makes it a top choice of places to visit in Michigan is it’s historical significance and is such a novelty because…”it had banned motorized vehicles (besides boats) for more than a century and remains a living Victorian community.” Visiting an island stuck in the Victorian era seemed like and educational opportunity we couldn’t just pass up. Wikipedia has this to say about Mackinac Island: “In the late 19th century, Mackinac Island became a popular tourist attraction and summer colony. Much of the island has undergone extensive historical preservation and restoration; as a result, the entire island is listed as a National Historic Landmark. It is well known for its numerous cultural events; its wide variety of architectural styles, including the famous Victorian Grand Hotel; its fudge; and its ban on almost all motor vehicles. More than 80 percent of the island is preserved as Mackinac Island State Park.” It was a main center of fur trade during the early years in American history, is home to a large British fort used in the war of 1812, it didn’t end up being a big player in the revolutionary war even though it was being explored by Europeans namely French before the Pilgrims landed at Plymouth Massachusetts, but to be honest our main attraction to the island was the ban on automobiles. For the kids the ferry ride was the very best part and two their credit it was pretty awesome.

At 8 miles around we could easily walk the whole way if it had been warmer I would have been sad that we didn’t have enough time to do it. We didn’t really have time to see the fort either but we did enjoy the horses, carriages, and the thousands of bicycles. The street next to the harbor was lined with cute shops mostly selling their famous fudge. We picked a slice to share for later and continued our window shopping. We found a butterfly shop that was linked (not physically to the Butterfly House on the island, a butterfly sanctuary with all kids of exotic butterflies and moths. They had beautiful artwork, watches, necklaces, and bracelets as well and displayed and other novelty items made with the beautiful wings of these butterflies. We talked to the cashier for quite a while as she told us about the butterfly house. I was captivated by the mental picture that was created by the description of a large display window where you can look in and watch the butterflies wriggle free from the hundreds of cocoons that had been so gently pinned to the wall. 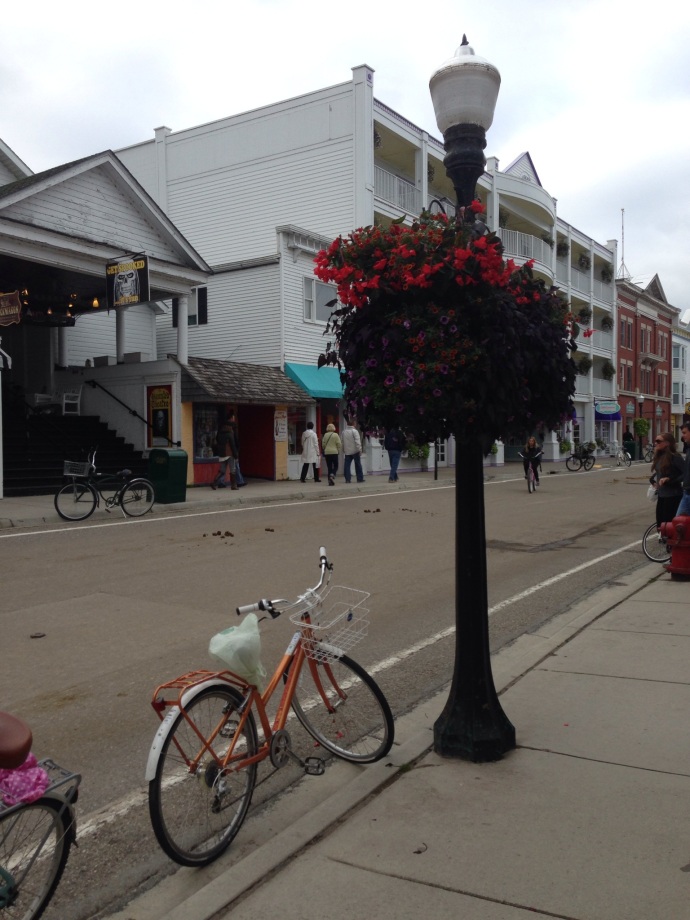 At the end of the row of shops was a beautiful park and the walkway leading up to the British fort.

Being a little nervous about the time (as always) we headed back a little but earlier than we necessarily needed to. But it’s all good, the shops were closing down for the evening and the thing that was begging us to visit the most was the fort and that needed several hours. 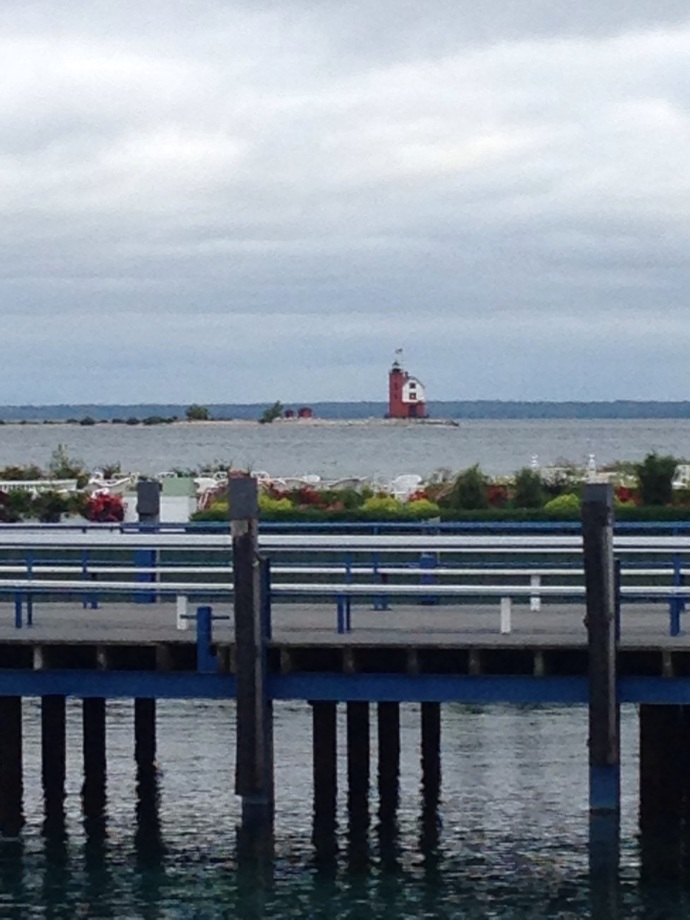 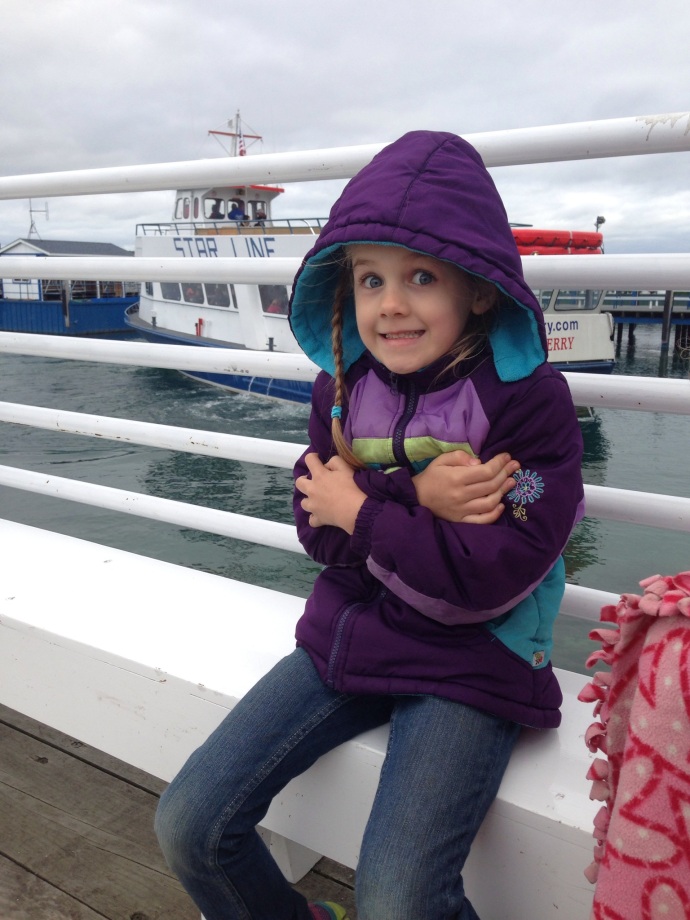 Eve was trying to sneak the fudge out of daddies pocket.

Eve was too busy looking around to see the pole straight in front of her. 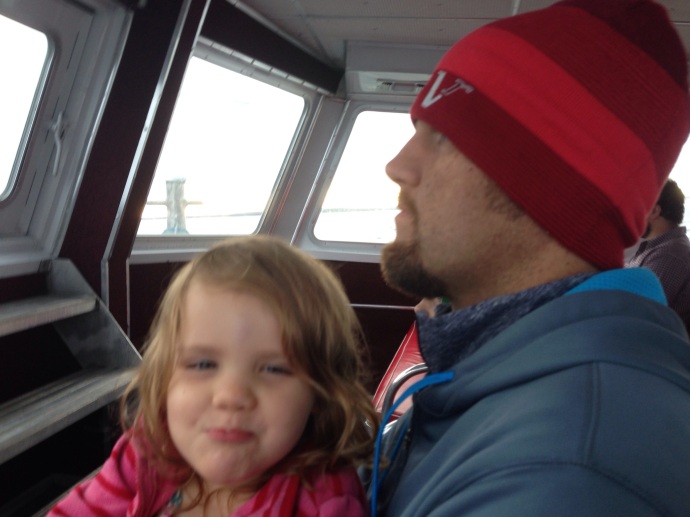 Sweet knot right in the mitre of her forehead.

the sun setting through the Mackinaw bridge.

We enjoyed our fudge and drove around the tip of the peninsula to see the Old Mackinac Point Lighthouse that we had seen from the bridge heading south. 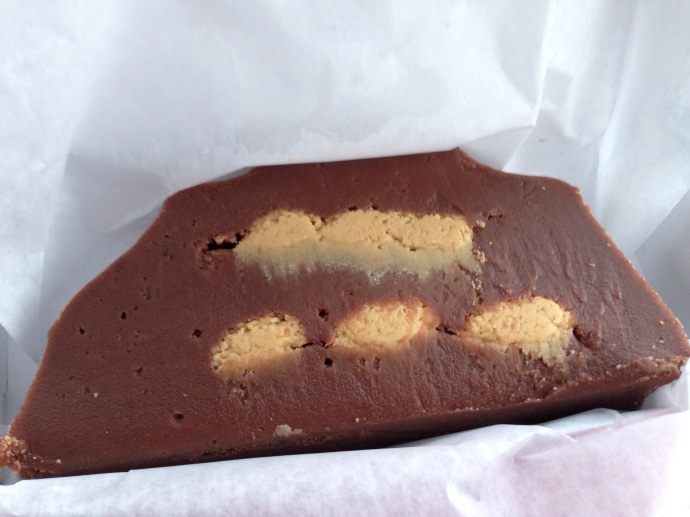 It was built in1889 and is called, ” Castle of the Straits.” Less than a mile from this quaint light house we stumbled upon a nice little hotel with reasonable rates that allowed pets but if you ask us the best part of the whole deal we will tell you the HOT TUB!!!! After enjoying the scenery in the elements it was such a luxurious treat to sink into the extra hot hot tub.
Good night from the mitten.