The Longest Round Trip of My Life

We left our apartment in Farmington NM at 6:30pm 6/18.  After deciding the best plan of action to get everyone to Oregon was to drive the family to Idaho where we could meet up with my parents, who would drive them to their house in Central Oregon where we had a few different options of ways to get them to Salem.  We were mostly packed so we threw everything in the car right after dinner, I grabbed a uniform for work in case I couldn’t make it back and needed to get a hotel and drive to work from there.  There was pretty much no complaining from the kids the whole drive, because everyone was so eager to get to Oregon to see Grandma and Grandpa, Hadassah, and Cyrus.  Chad drove first.  We drove right into the sun and were so relieved when it finally set as we crossed into Utah.

We planned to drive into Salt Lake, spend the night, and then meet my parents somewhere between Burley and Boise early the next day.  We stopped in at three different hotels in the Salt Lake-Ogden area, but none had vacancies so we had them call the other hotels in the area of the same chain, and they were all full as well.  At this point we were in Ogden or Logan, I can’t remember which, and we decided it’s 2 or 3 am, so by the time we find a room and get the kids in it, it will be 4:00, and then what’s the point.  By this time I was wide awake in my nightshift groove, so I took a turn driving.  We got into Twin Falls around 5:00am.  I had been told by my parents to stop in Burley, so I was already pushing it.  Since everyone was still sleeping, I figured let’s go see craters of the moon while were here.  By the time we get there and have breakfast, the park will almost be open, and we can see it, then get back to Twin in time to meet the rest of the relay team.  So I headed north.  After about 30 min. we got ahold of my parents and permission to meet them in Boise at the outlet mall.  So we turned around and by the time we got back to Twin falls it was 6:00 everyone was awake and ready for breakfast.  Thanks to IHOP, which was just over the Snake river, we could grab a bite and got back on the road in not too much more time.

Chad drove our next leg.  He had not slept too soundly in the previous four hours, but he had gotten some sleep and he was worried about me trying to drive back on no sleep (rightly so).  I took the opportunity to sleep from Twin Falls to Boise although again, although it wasn’t very restful sleep, and I was wide awake by 44 miles out of Boise. We texted our teammates who we discovered had just left Baker and were a little over two hours out from our rendezvous location. We pulled in thinking we could possibly keep going and meet them in Ontario I supposed then I could say I made it to Oregon, but I knew I needed a little more rest and I was already pushing myself in miles that I would have to drive home by myself on minimal rest.  So, we stayed put and took a nap in the car.  When we heard that mom and dad had made it to Meridian we got the kids and dog out of the car for a run, to get some energy out and stretch and maybe use the bathroom.  The kids were excited and very cute to watch.  I am going to miss their energy, laughter and smiles these next three weeks.  I am looking forward to some sleep, reading, and contemplative time.  I have not been getting that alone time with my creator since we embarked on this adventure.
My parents pulled in around the corner in a white 15 passenger church van around 10:00am only a second after Caleb told Hannah, “they could be here any second.” It was pretty funny.  And as soon as Eve recognized the faces she came running. Nothing like a I’ve missed you so much I’m going to sprint and dive into your arms kind of greeting to let you know how much you have been missed.
After talking and catching up, transferring bags and car seats and a potty break for them, feeling the time crunch I gave all the adults good bye hugs and we all got buckled in.  Realizing as I turned to wave my good bye that I had not hugged the kids good bye it sunk in how much I’m going to miss them. Three weeks is a long time. I know they will have lots of fun so I won’t worry too much. I know they know I love them but still a big missed opportunity to get in a good bye hug.

North to Burley I set my sights.  I do so love the higher speed limits in Idaho and Utah.  In an inky two and a half hours I was pulling into my childhood best friends house for lunch and a chance to get off my backside. I knew I looked like crap and probably smelled like crap but Colleen didn’t mind and after a hug I asked if I could take a shower and she said, “make yourself at home.”  I took a quick and wonderful shower and felt human again.  Thank you so much Colleen for lunch and a shower!
I couldn’t stay as long as I wanted, as I was already worried about tiredness and I knew I had 10 more hours of driving to do.  I have never thought that eastern Idaho ever offered as much beauty as the rest of the state but it really was such a beautiful drive through there. 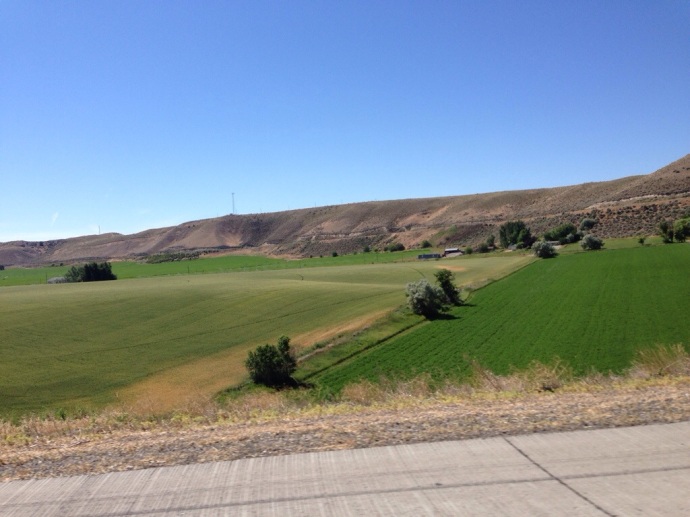 I filled with gas at Maverick which is my new BFF (for this trip at least), and grabbed some snack food hoping to use it to ward off any afternoon drowsiness.  I then grabbed a coffee at the Golden Arches and headed down the road. Here is a bad picture of the beautiful Snake River flowing through Burley. 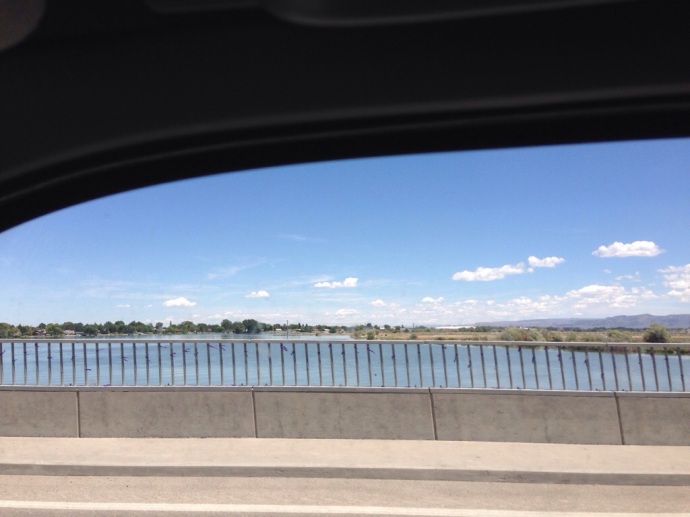 I hit I-84 east feeling like a whole new person.  I’m pretty sure it was the shower, and the coffee probably helped too. I turned my phone to iTunes Radio and filled the car with lively music.  The construction between Burley and Salt Lake allowed me to play dodge the cone as I took in the sights of the amazing mountains.  Man we are so blessed to be surrounded by such beauty all the time. 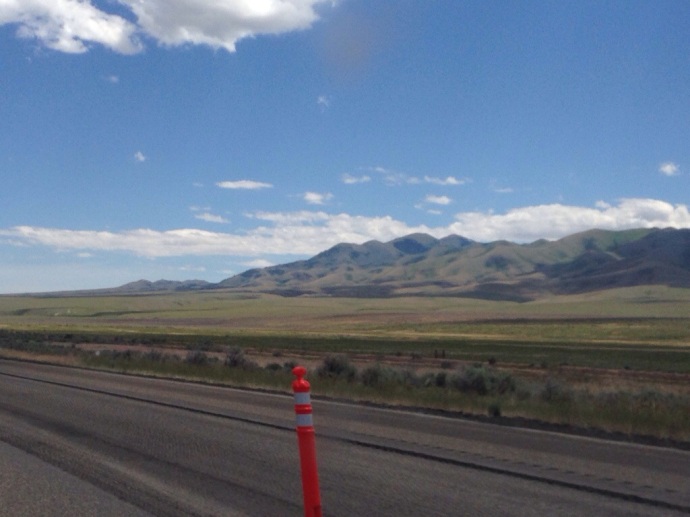 I lost my cell connection so I changed to the stored Christmas music on my phone, and stopped at another Maverick in another little town well before Brigham City to go to the bathroom and was so surprised when I got back on the freeway to discover stop and go traffic already.  For the next two hours I was in stop and go traffic.  I knew I would hit rush hour but I didn’t know it would be starting so far out of Salt Lake or last so far past it.  For the most part we went faster than you do in Portland rush hour traffic but it just kept going and going and going.  Wow.  Now I was looking at an after midnight arrival time in Farmington according to the GPS but I was also wide awake now so I didn’t want to get a room yet. 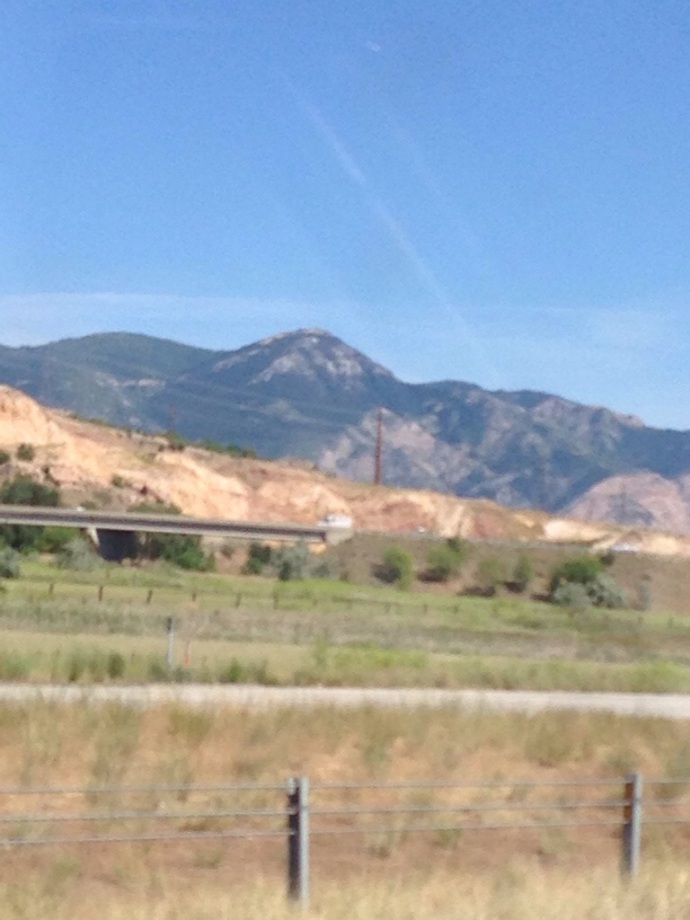 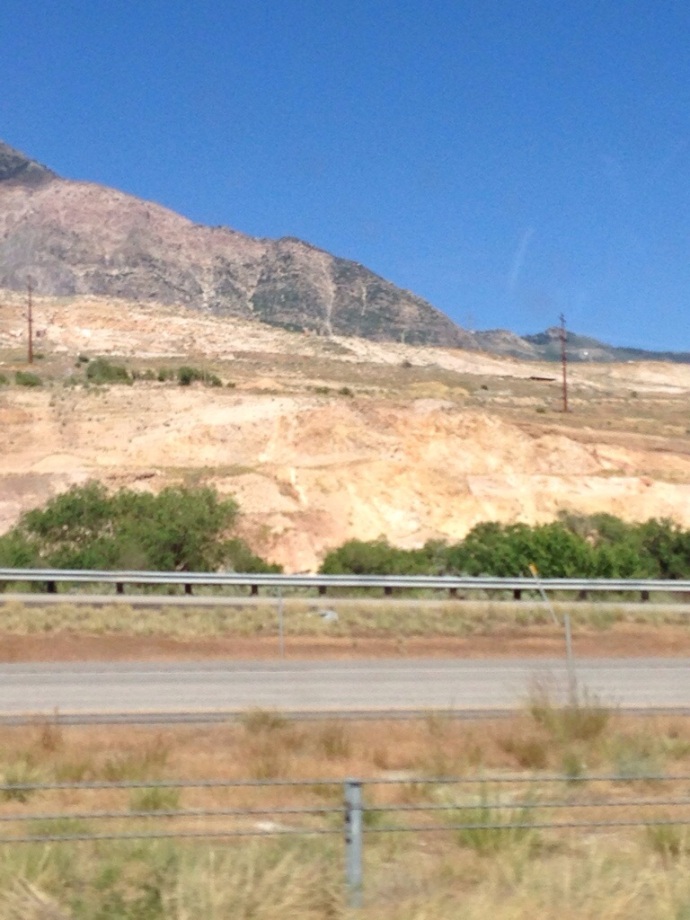 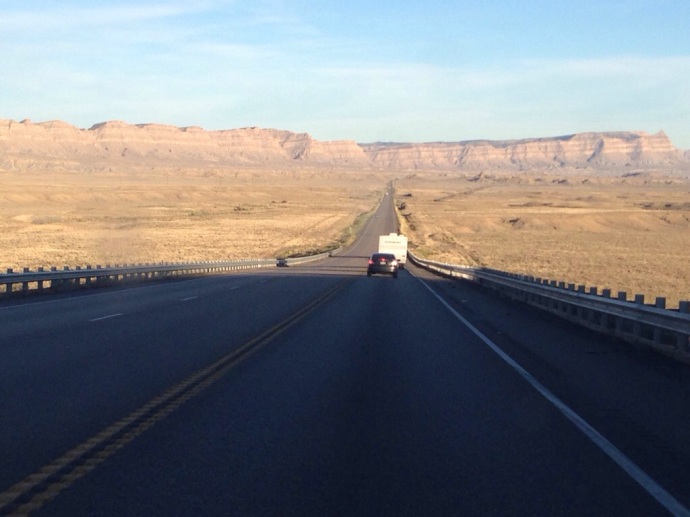 The sunset again was beautiful.  It got dark as I pulled into Moab for dinner. 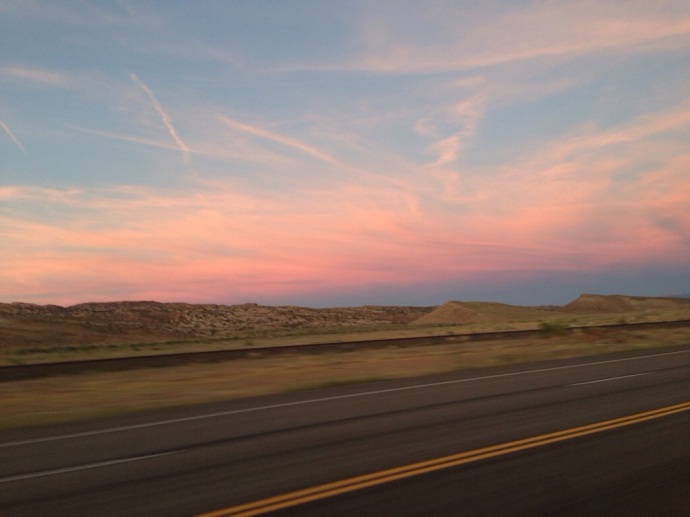 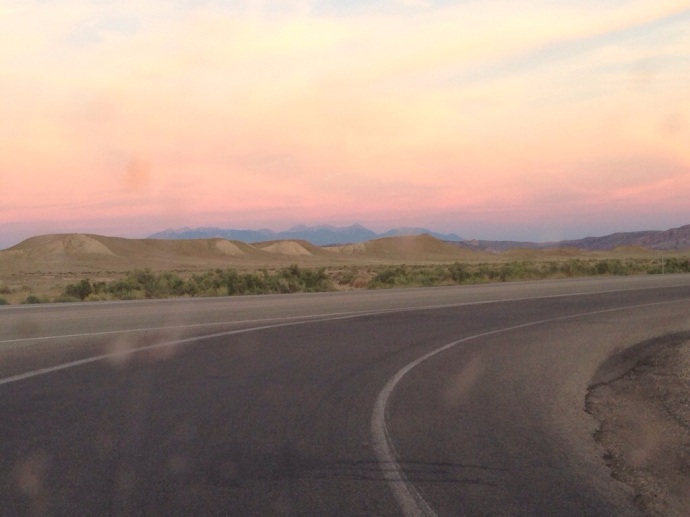 In Moab I stopped at Paradox Pizza for dinner, and a few phone calls to various people to check in and let them know I was doing ok.  I was only three hours from home (New Mexico that is).  The first hour into my drive from Moab to Farmington was filled with eating pizza which is very messy car food, drinking ice water and watching the lights in my rear view mirror. Then came the hard and tired time. I sang CC songs from cycle one off my phone, slapped my face, wetted my eyelids from water out of my water bottle and attempted to call a few people to talk to on speaker phone because I didn’t feel that area was all that safe for me to pull over and take a nap. I thought if I can get to Cortez I can get a room.  I did make it to Cortez it was pretty shut down looking as it was almost midnight.  I stopped at another Maverick gas station and filled my tank.  I chatted with the clerk inside for a little bit and grabbed a BIG gulp sized cup and filled it with Ice.  Enough ice I could eat it all the way to Farmington.  I added a few Big Hunks to the ice as insurance.  Surely chewing on that sticky stuff should at least get me to Shiprock which is right between Cortez and Farmington and if I was going to take a nap in the car the hospital employee parking lot there would probably be the safest place.  The ice worked great but wasn’t going to last me as far as I had hoped but between the ice and 1st Big Hunk I made it to Shiprock.  Being on familiar roads somehow helped me to pull it all together enough to make it the last 28 miles to my apartment.  That and the Dave Ramsey show played from my phone.  Walking into the apartment at 1:05 am I felt so much relief.  I had made it but not with out a few scary moments.  I don’t plan on ever pushing myself like that again.  Thank you all my friends and family who where praying for safe travels because I am sure that is what made the difference.  Now after most of the night and day of sleep I am still a little scared that I pushed so far.  I have to remind myself that I made it.  And promise not to push that hard again.
-love you all and I’m so thankful for this beautiful day that I’m safely in Farmington for.