Several years back we talked about trying to make our own cheese.  We looked up recipes and browsed the web for ideas, but we never did make it.  Then we didn’t eat cheese, so even though we still wanted to try making it, it didn’t make since to.

Well we are in a “you only live once” faze right now.  Not in the make stupid mistakes kind if way, but if you really want to try something like making cheese (a whole $5 worth of ingredients) then it doesn’t hurt to try it.

Mostly Chad’s idea but we were all excited about this little science experiment.
The items needed are:
-A gallon if whole or 2% milk
-something acidic we used 1/3 of a cup of lemon juice and 1/3 of a cup of vinegar although Chad believes it wasn’t enough acid because our whey was awfully white.
– salt (more than you would think because some of it escapes with the whey)
-large pot
-wooden spoon
– a large bowl
-strainer
-cheese cloth (we used a nylon mesh bag, the ones that we use to make almond milk)
The whole process takes at least 8 hrs, but you are only actively preparing it for maybe an hour of the total time.

1. The first thing you do is pour the entire gallon into the large pot and put it over medium to low heat on the stove. Heat it up slowly to about 185 degrees, which Chad tells me is just before boiling temperature.
. 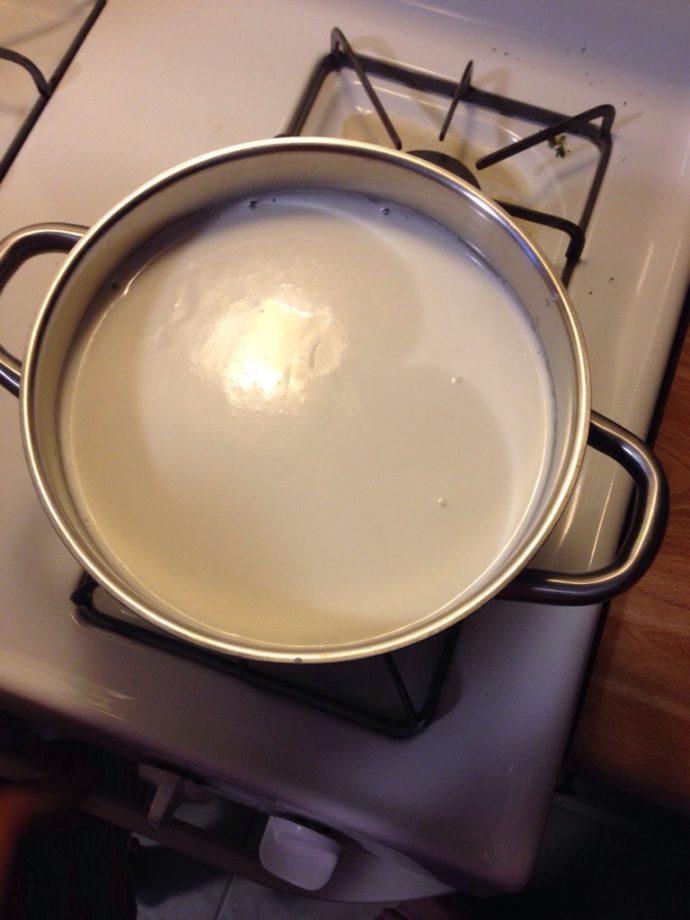 2. Then we added the vinegar and lemon juice mix, causing the milk to curdle.  Leaving it on the heat for a few more minutes as you stir the curdling milk.

4. Add your salt to the mesh bag or curd in the cheese cloth after most of the whey has been strained out.  The salt will pull out more moisture and allow for the cheese to become more firm.

After several hours we took the curds down and put them in the refrigerator, in the bag, in the strainer with some heavy cans on it to add weight and pull out even more moisture.

5. Time is all you need at this point.  Our directions said eight hours, but we left it all night and it still came out the density of a spreadable cheese.

Our first attempt turned out a little salty, but still a big hit with the kids.