Ode to Life on a Farm and an FBC Bridal Shower!

One of my favorite parts of being raised on a dairy farm in rural Idaho was the sheer number of births I was exposed to. I know, really, none of you are suprised.  Our birth numbers were pretty impressive even compared to some birthcenters I have worked in.  Between the kittens, the puppies, the piglets, and the sheep not to mention the cows.  For this birth junkie I never had to look to far or for too long.  I loved feeling like I was helping wether it was drying of kittens whose moms didn’t lick them as clean as they should have, holding a lamp for my mom who would place the newborn piglets on dry straw closer to the heater who were being born on a cold winter morning, or sticking straw in the nose of a newborn calf to stimulate it to breathe when that function didn’t start as spontaneously as I thought it should have.  The truth be told I’m sure most of those animals would have been fine with out me and maybe a few would have even been better off 😉 I was young and just doing my part to make the world a better place.  I often feel like I was given a huge priceless gift that I could never give my kids even though I often wish I could.  Wednesday morning the kids got a small glimpse of at least this aspect of farm life when Cyrus’ kitty (a stray that he has been feeding) gave birth to a batch of kittens. I had woken up shortly after six and was getting dressed to take the dogs on a walk when a knock came at the door.  It was our neighbor who had just come home from work and noticed that White Blueberry (that’s what Cyrus named her) was having kittens.  I knocked on Stephanie’s door and relayed the news and soon all the kids were up and out to watch the birth of these new little kitten lives. Six little furry babies were born.  The first little white one born wet on the cold cement did not make it, but the other five with their tiny pink ears and high pitched mews are doing quite well.  They were moved to a comfy box in a safe from the kids and other animals location and the mother kitty seems to be fabulous in her new role.  I continued out to walk the dogs since there was already too many people for a birth mommies comfort so Hannah was our photographer. 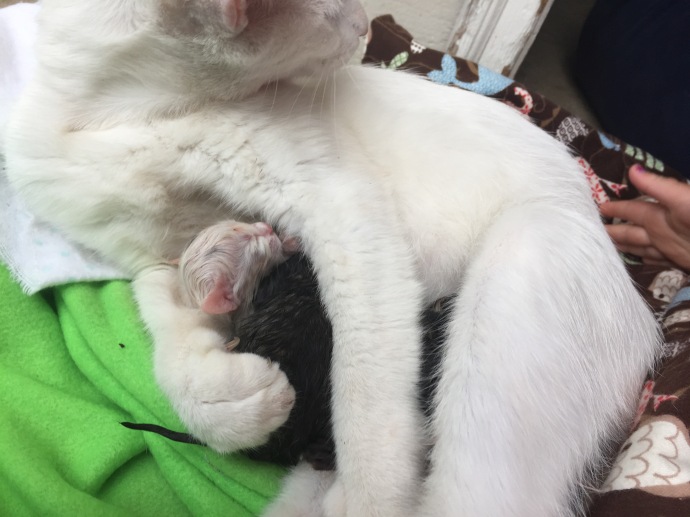 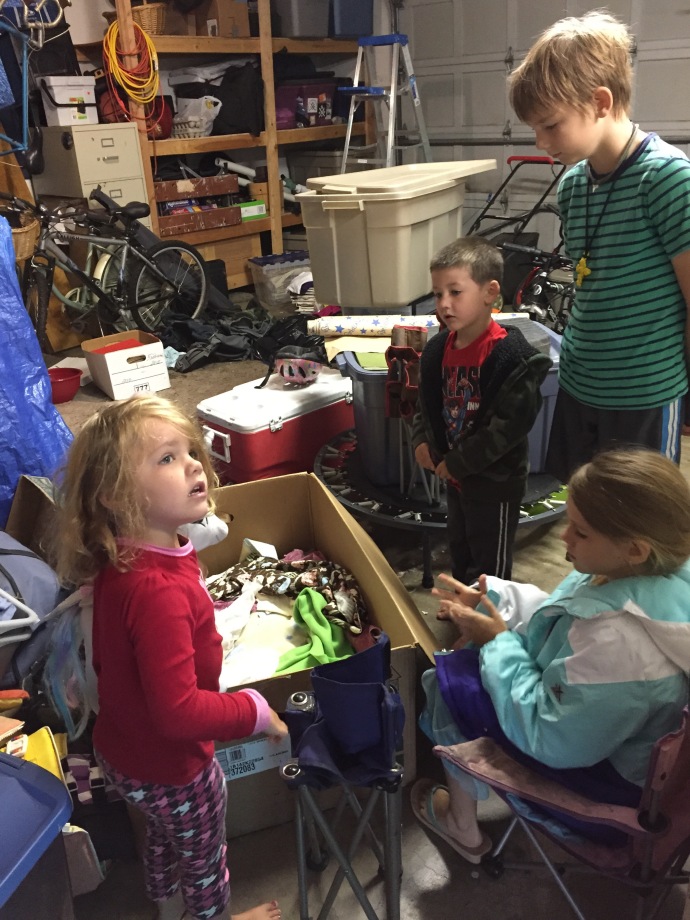 Mid morning after all the new additions were settled, we accompanied Stephanie to a church play date at Bush park it was fun to see some old friends.  After that I made my way out to get the groceries to make an appetizer for a bridal shower.  Our house is close to Target and Lindsey was registered there so I though possibly I could get away with one stop shopping.  I kind of had to since Stephanie had a Dr. appointment and I needed to watch the kids.  I was pleased to find jalapeños, cream cheese and bacon.  It all the suddenly became way less convenient when despite the customer service representatives best efforts we were unable to access the registry.  She suggested I just pick out something I like and get a gift receipt.   I looked at a few things then decided I would get a date night gift card to P.F. Changs and some cute refrigerator magnets.  Date nights are so important anytime but especially in the first years of marriage when you go quite suddenly from the novelty of dating and special effort to spend time together to being together with out effort needed to be spent.  It is easy to feel like all the romance has gone from your relationship.  Feeling pretty good about my purchase…this traveling thing has made me an anti-stuff person that may have been a factor.  The cream cheese stuffed bacon wrapped jalapeños took longer to make than I thought and I found myself running a bit behind schedule.  Since Chad does all of our cooking I am a bit out of practice.  I seeded and viened the jalapeños, Caleb filled the halves with cream cheese and Hannah wrapped them with bacon.  The first batch we baked at 400 degrees for 20 min.  Then put them back in for another 10….it wasn’t supposed to take that long per Chad.  The second batch we turned the oven to broil since the problem with the first batch was that the bacon didn’t get as crispy as I wanted it to.  The second batch came out crispy and perfect in about 8 min. So much better than the first batch and soon enough that I was only going to be fashionably late.  A tad underdressed and in my brother-in-laws older truck I headed out excited to spend even more time with my FBC family.  It is amazing what can go through your  head in 28 minutes.  I went from the top of the world happy to be part of this celebration of a fellow nurse that I couldn’t be more proud of and her stands on maintaining a God honoring relationship better that Chad and I had been at protecting eachother from the temptations that come when you love and are so physically attracted to your amazing soon to husband.  As I got closer I worried about what people would think of my non traditional gift better suited for the actual wedding than the shower.  What about my car, I was so glad to have the chance to use my brother-in-laws truck since Chad had ours in Portland as he was attending a class.  All the sudden it was front and center in my mind that it didn’t compare to the world’s view of a successful person and maybe even quite the opposite…were my appetizers good enough.  Good grief.  Serious rain on my parade.  Such an upfront attack of fear about what these people that I love and I know love me would think of me.  By the time I arrived I was feeling self conscious but willing to take the risk.  Nothing worth doing is with out risk and the rest of my life is about not letting fear stop me from doing what I feel like we are called to do why would this be different?  The appetizers were quickly well recieved and I guess it would have been fine even if they hadn’t.  Of course the self conscious feeling was never completely shaken.  I hadn’t planned on staying late but it was fun to sit around the fire and listen to those around me.  I don’t drink and was a lot more up tight than everyone else but it was fun to just sit and listen and not have to talk about myself.  I was asked for my marriage advice and let’s face it I organize my thoughts way better on paper than in verbose elegance.  Thank you Lindsey for loving me just the way I am.  Everytime I spend time with you I come away with a new drive to always do my best and love others until it hurts.  Maybe someday I will be as thoughtful of a gift giver it’s not my love language I guess I just need more practice.

2 thoughts on “Ode to Life on a Farm and an FBC Bridal Shower!”