Slept in way later ok maybe 20 minutes and woke up feeling mostly refreshed. A shower then cereal for breakfast followed by packing up and loading the car. The hotel wasn’t available for a third night, but that was ok because they were going to let us leave our cars there for the day for a small fee ($10).
Such a weird feeling to be having so much fun together and know there was going to be no wind down. We were going to play all day then abruptly have to say goodby and drive away in a completely different direction from grandma and grandpa come park closing time. No point in focusing on that. We pushed the sad thoughts from our minds and made our way through the gates at California Adventure. The gates open there an hour before the rides so we grabbed a Starbucks and sat outside soaking in the morning sun and people watched. We watched the rush of people as the rides opened, giving it a little time to clear out so we wouldn’t get trampled by the crowd. It is amazing how busy it can be even during the slow season.

Eve wore the ears that grandma got for her at the hotel gift shop. The first segment of the park, Donna referred to as movie land, had advertised a frozen show. With the bugs life show closed and the girls being such big fans of Elsa and Anna we decided to do that first. The line was short for the 10:30 showing. We loved all the little Elsas and Annas dancing around the room where we waited to be seated. Our own two joining in on the fun. The show was a sing-a-long/play with the main non animal characters from frozen. The show was a hit. 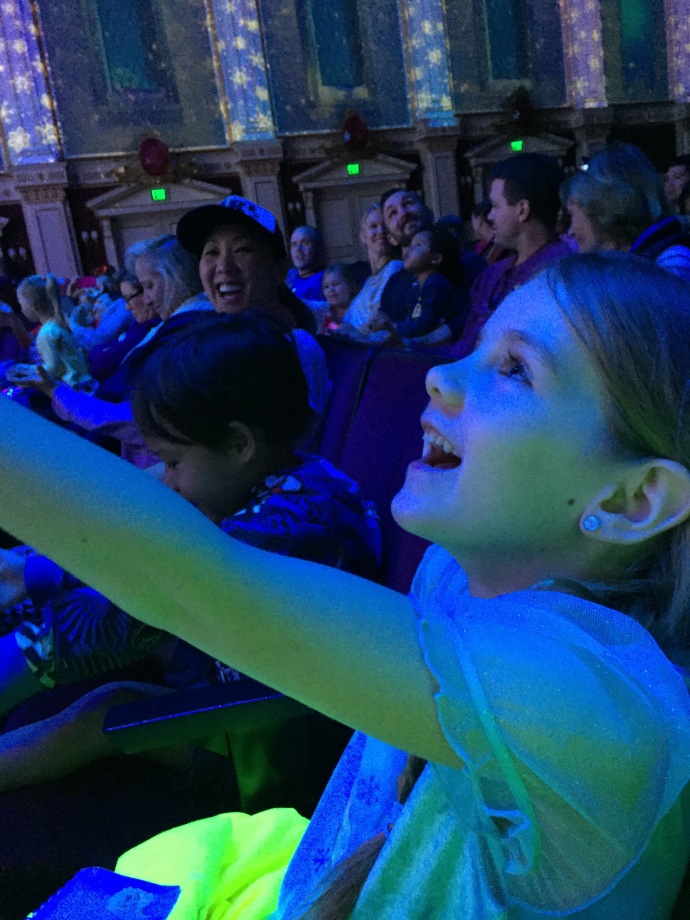 We split up for a few rides with the guys and Caleb doing tower of terror. Later Caleb said he shouldn’t have done that ride, it scared him and now he will probably have night mares. I told him that is why you have to protect yourself from seeing those things because once you have you cant just get the images out of your head. Maybe he learned something about himself. Of course then I should feel bad for making Eve go on some of the story rides with us just because we all wanted to go together. A parenting fail :0(. We loved Turtle Talk with Crush where he interacts with the crowd and ask us some questions while we ask him some questions. He picked Caleb for a question and he asked Crush what is the answer to the question of life the universe and everything. He answered “42, doesn’t everyone know that? And since you seem like such a smart guy maybe you can tell me something. I found this in the the beach the other day and have been trying to figure out what exactly it is.” (Holding up a bikini top) Caleb answered that it was some thing some girls use to cover their eyes when they are sleeping. Gotta love that kid. Then the kids met Elsa and Anna and got a few autographs. 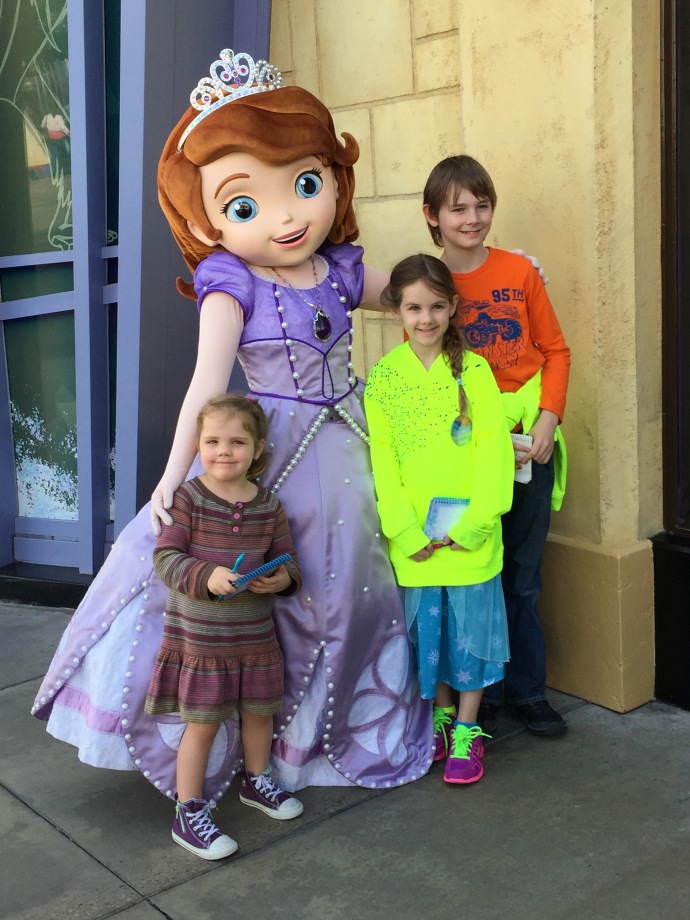 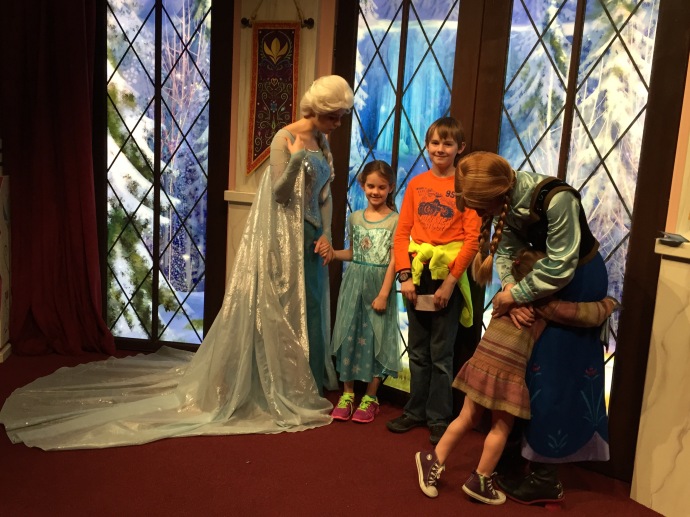 We had to stop and take a few family pictures in front of the waterfall. 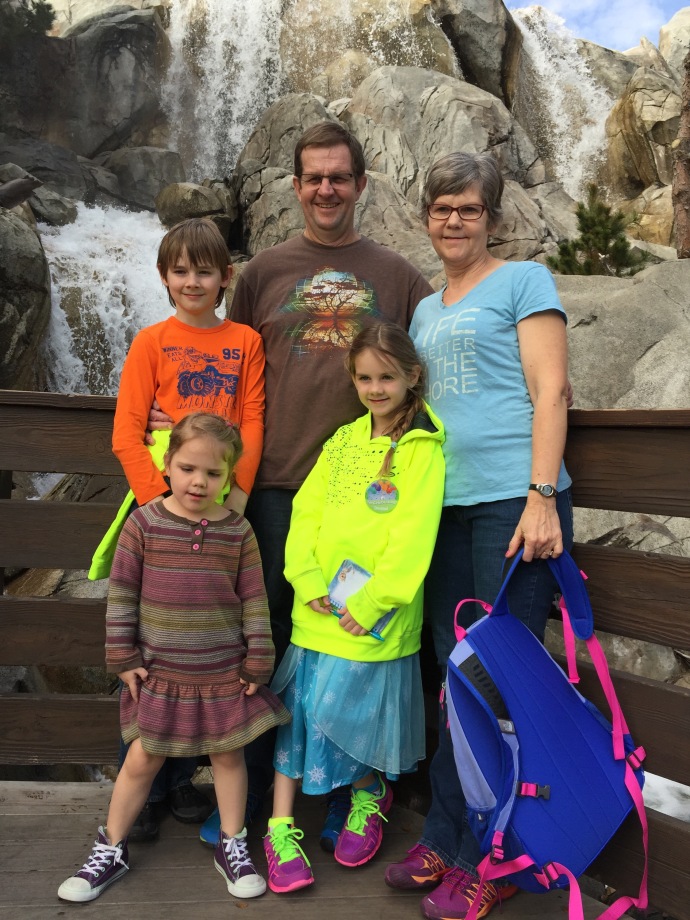 The bugs life section was fun too. 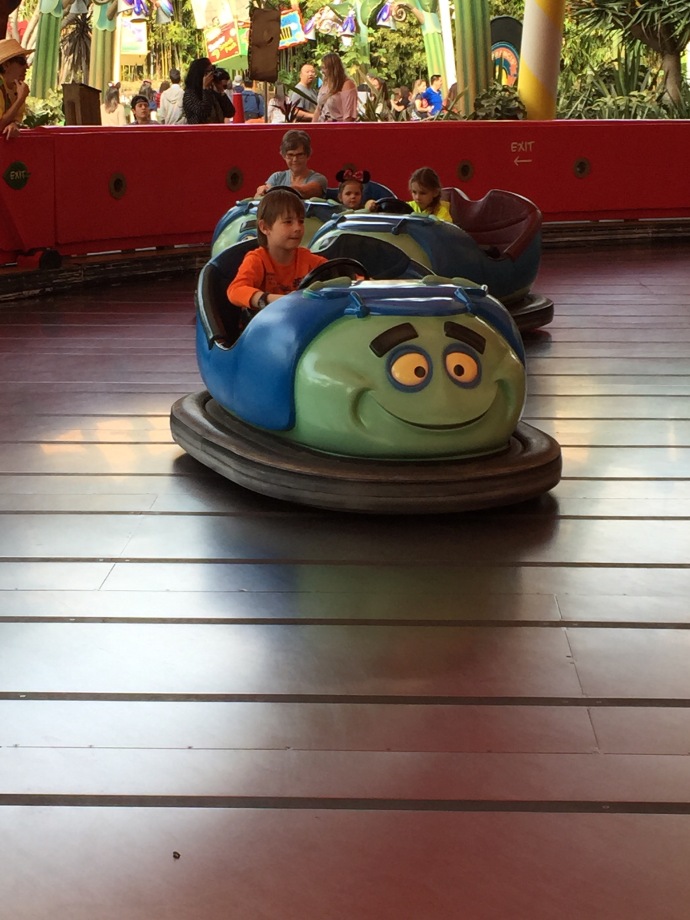 carsland was awesome!!! It was being built the last time we were there so it was the first time we had a chance to see it. I think I could have hung out there all day. The music and retro feeling was so cozy. The company wasn’t bad either. 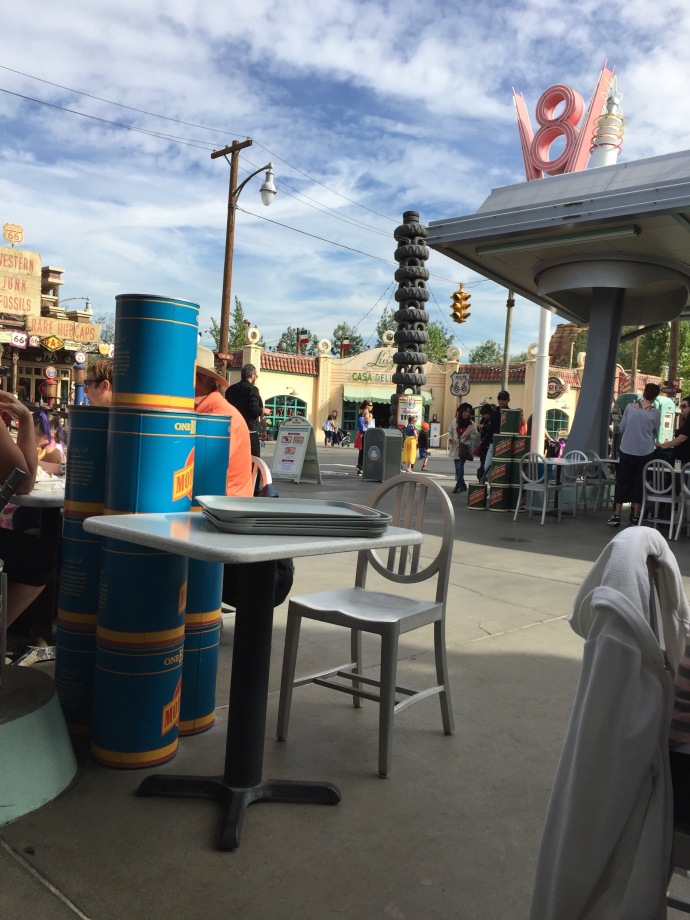 Eve’s favorite ride of the day was the cars racing ride. That girl has a need for speed. Hannah wanted to ride California Screaming but was a little unsure so she watched the first time. She went the second time and declared that she regretted not going the first time as she jumped around declaring how awesome it was and how she felt like she was floating when she went upside down.

Eve was showing us how tired she was so we stayed out of the next ride and she fell fast asleep. The Ferris wheel was awesome. You could see the entire park although I would have been game for one more time around.
Hannah thinks that the Parade (both in Disneyland and California Adventure) were the best parts of our whole visit and I agree they were well put together and very fun to watch. 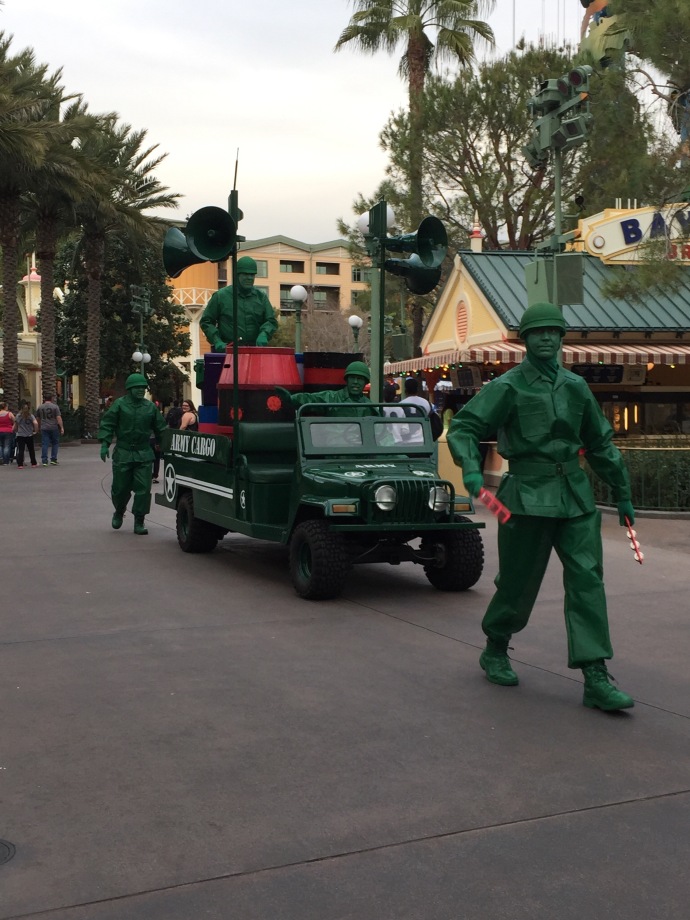 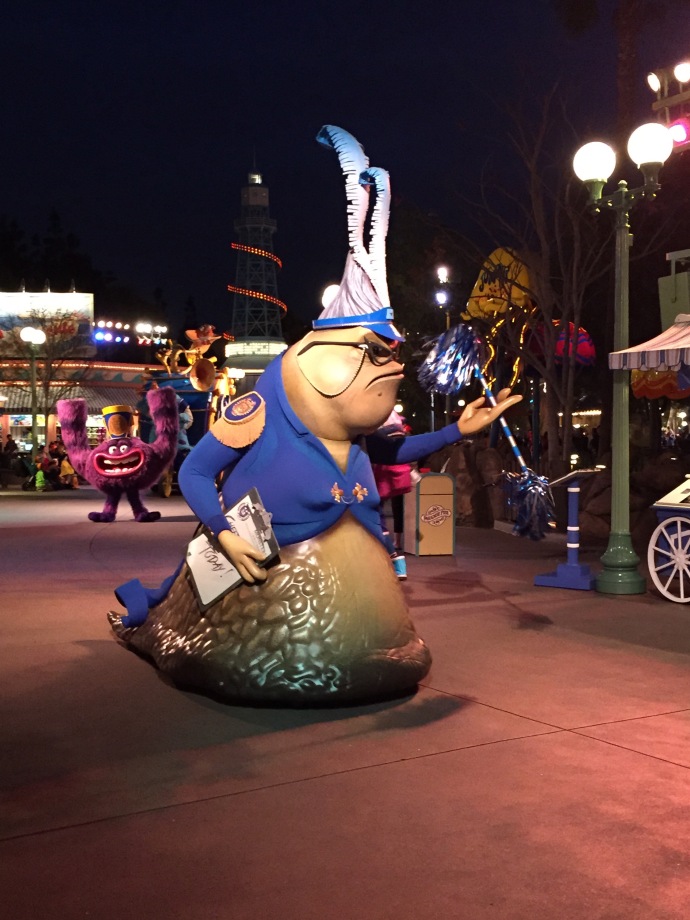 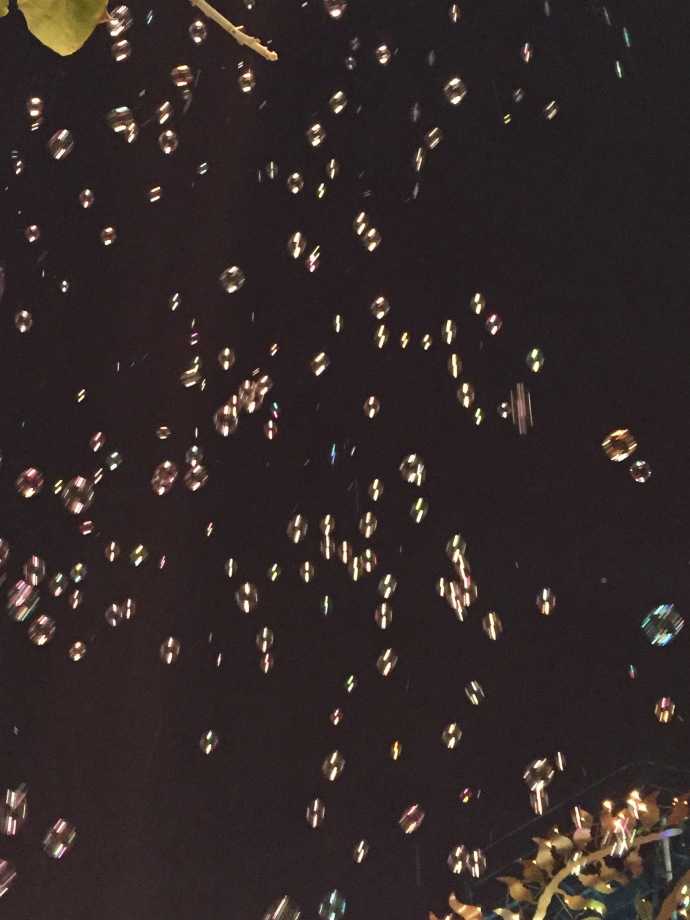 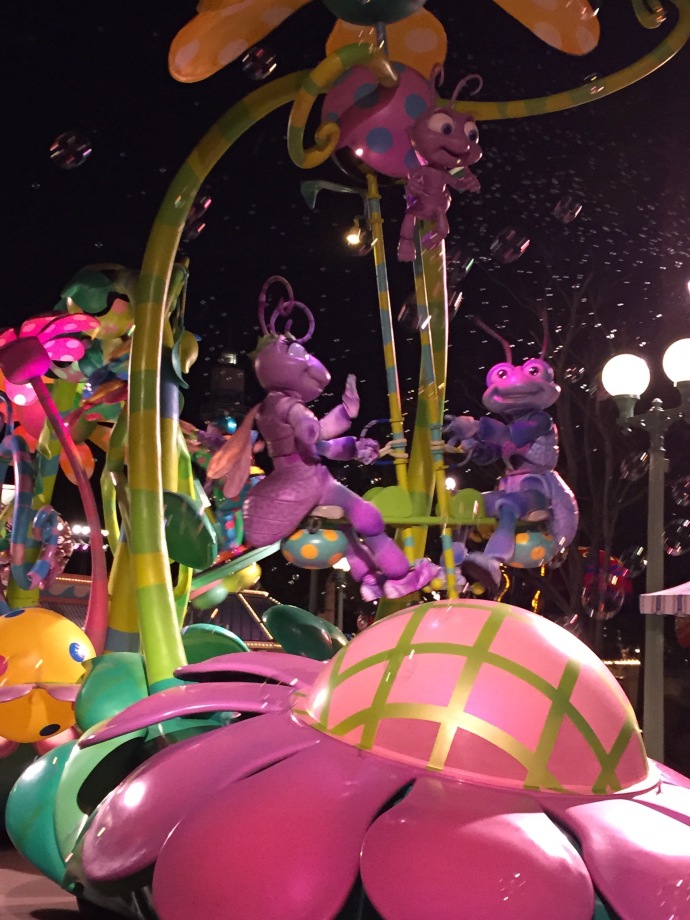 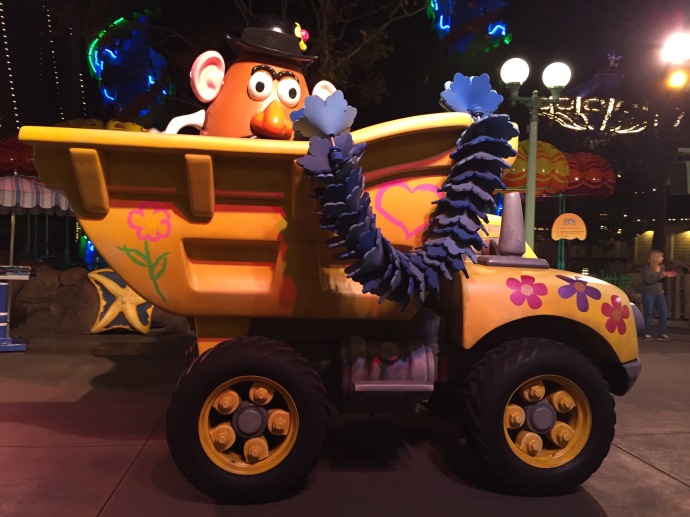 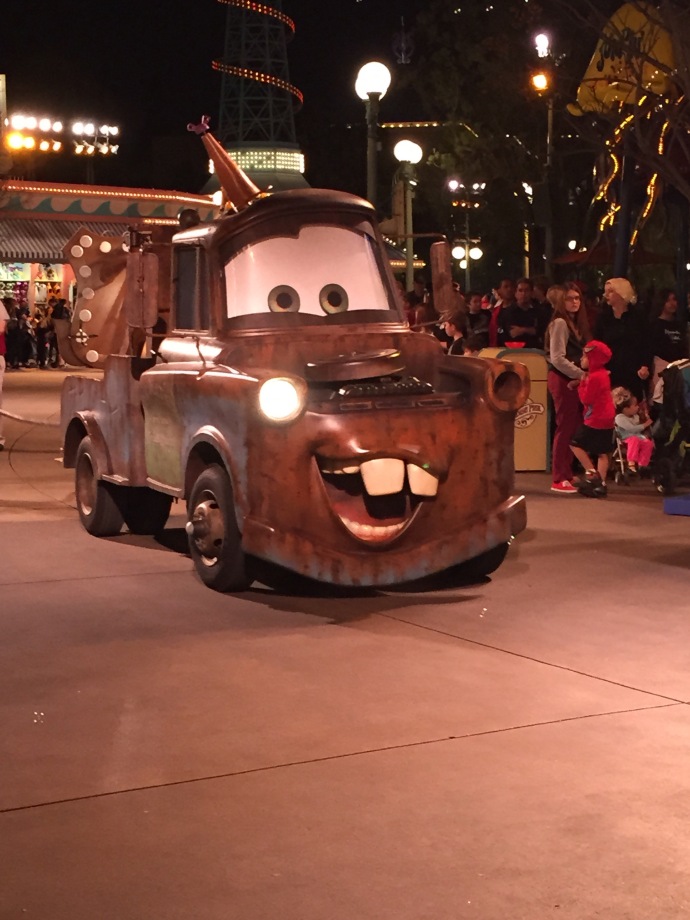 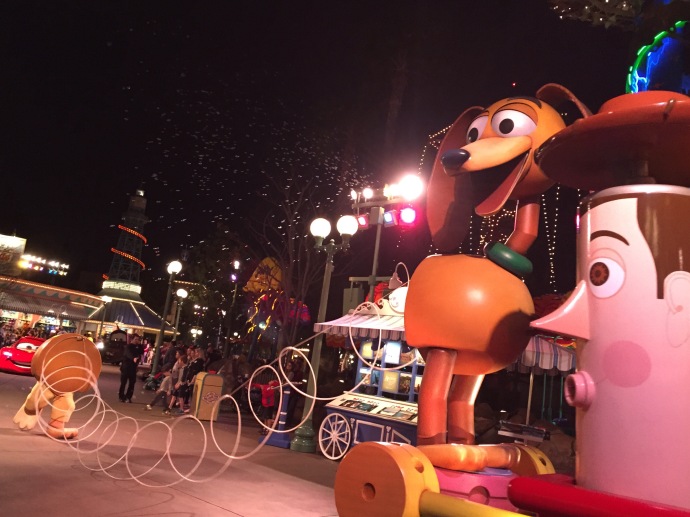 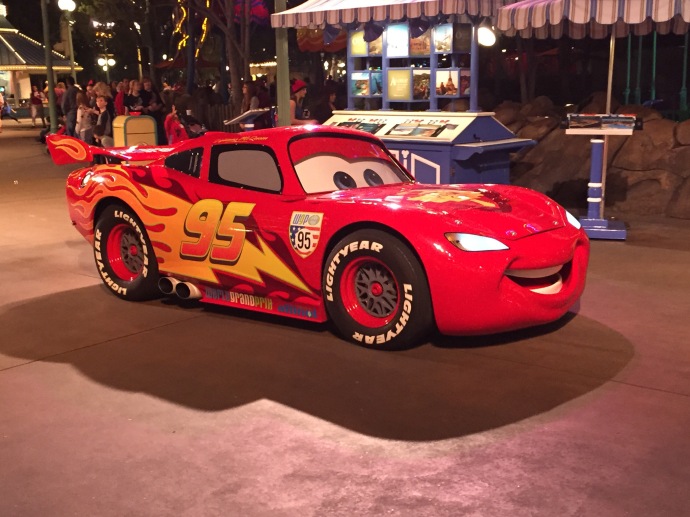 Eve got make up a ride she missed in her tiredness and Chad, Caleb, Hannah and I rode California Screaming again. I love that the kids love fast roller coasters. 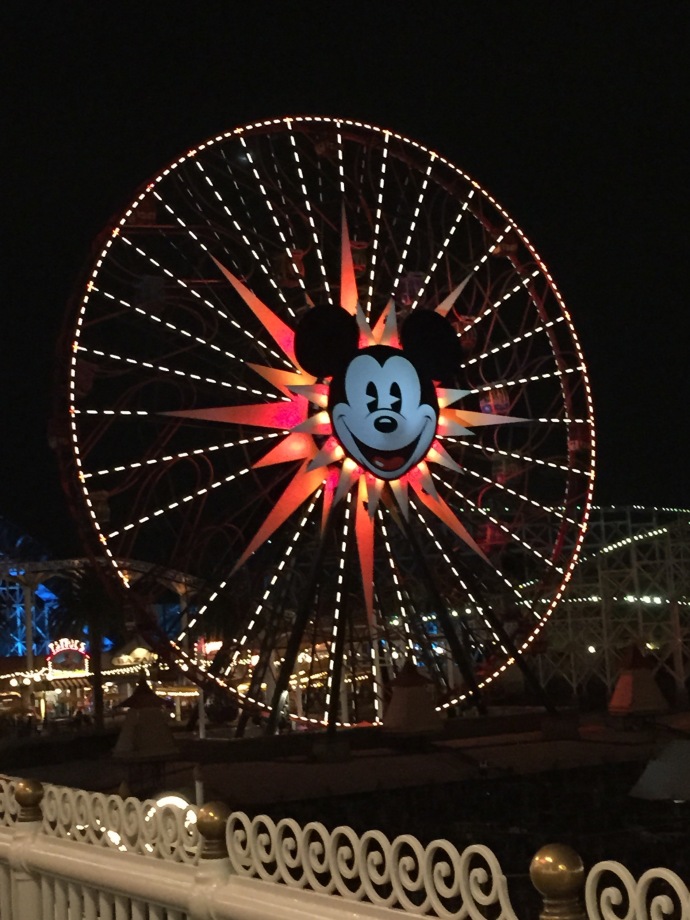 We had a late hotdog dinner and time for one more ride. Eve suggested the cars ride and we all agreed that it would be a great last ride! 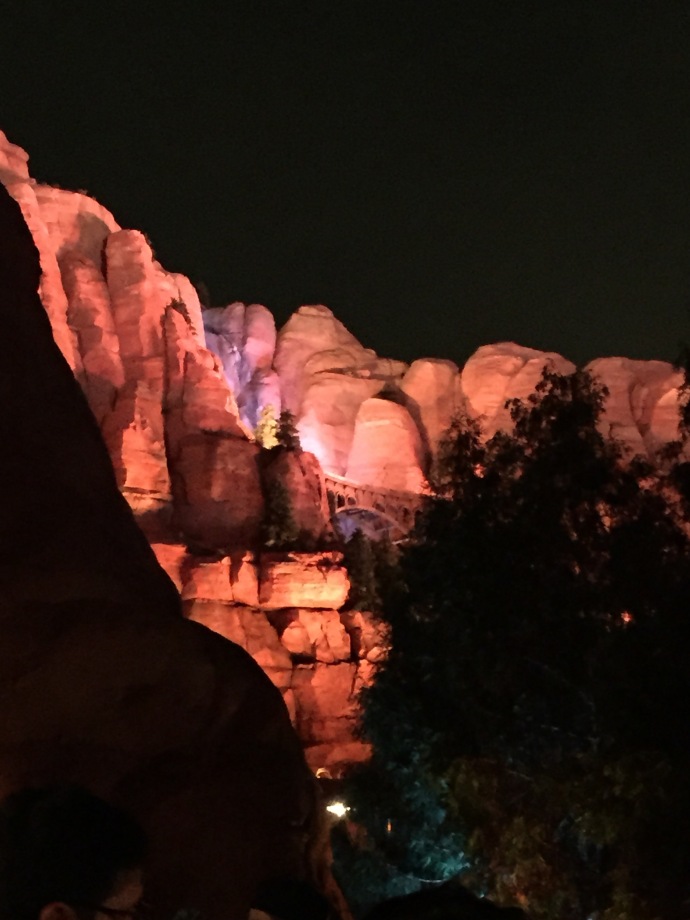 It was a fun fabulous day, I’m sure we would have enjoyed being all together no matter where we were but Disney does such a good job at all the details that make you truly feel like you are in another land, never never land maybe. When I was young and growing up I prayed that I would not ever marry someone that I knew at that time. I loved Cambridge and the childhood it gave me, I wondered about where I would be, what kind of family I would marry into. I could have never imagined how blessed I would be. God answered my prayers in a husband who valued my craziness one that I did not know in my youth. I listen quietly when other women I’m around voice their in-law struggles and know that I too have been blessed in that area. In-laws that not only warmly welcome me but count me as their own, boundaries have never been an issue and I know that has been a conscious decision on their part. Now here we are saying bye again to a piece of our heart. In a way it was good that it was not all drawn out. Chuck and Donna we feel your absence daily in our hearts thank you for the fun family memories made this week in Disneyland. And know that we recognize the gift we have been given in having you guys as parents, grandparents, in-laws and mentors. We love you!