Chiniak Lake And The WWII Bunkers﻿

I could be wrong about the name of the lake we hiked along beside today, I know for sure that it was beautiful.  The photos never do it justice.  We were on a quest looking for the bunkers not expecting the gorgeous views or well maintained hiking trails (ATV) trails that kept going on and on.  Eve didn’t wear long pants under her skirt so the pushki and salmon berry plants had free access to her legs.  Also, her boots rubbed on her legs.  We won’t do that again.  We stopped at St. Mary’s thrift store on our way out and bought a dining room chair (we only had four) for $5 and a razor scooter for $2 it embarrassed the kids when I told them that u bought it to ride around the neighborhood with.  We picked up lunch at the Happy Sushi Time food truck before heading south.  We then stopped at Java Flats which is a well known coffee shop and now we know why.  It was amazing.  Chad bought a Bruin, a cappuccino with ginger and molasses, and I picked a Kodiak Mist which is a green tea of some kind with vanilla soy milk. It tasted like a funky chai tea.  They had a whole selection of monster cookies too including a monster gluten free chocolate chip.  Caleb had white chocolate with dried cherries and almonds, Hannah had chocolate chip and coconut, Eve had chocolate chip, and Chad had a peanut butter cookie with chocolate swirled on the top so it looked like a cinnamon roll. 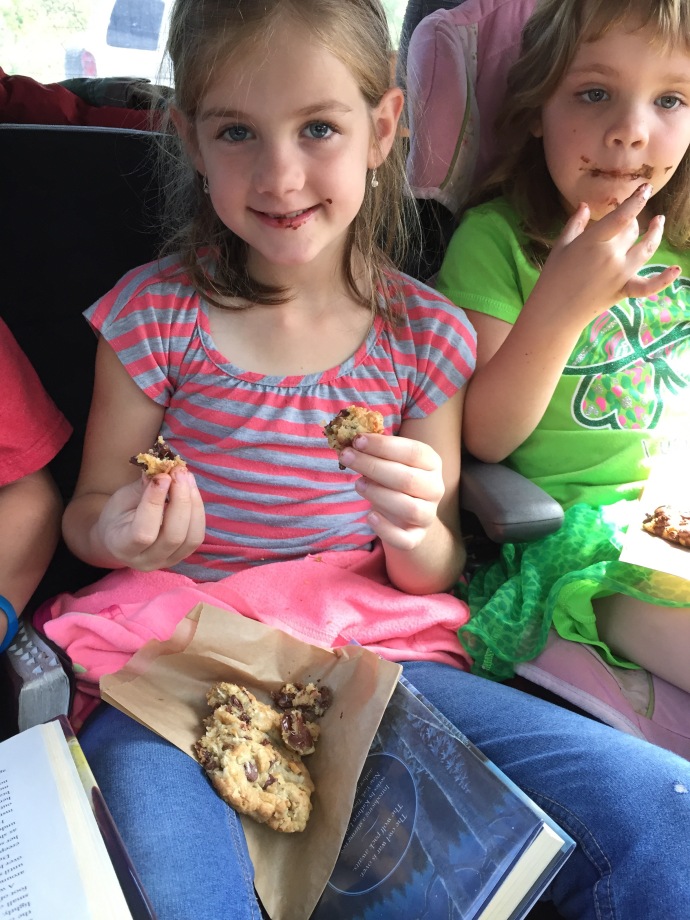 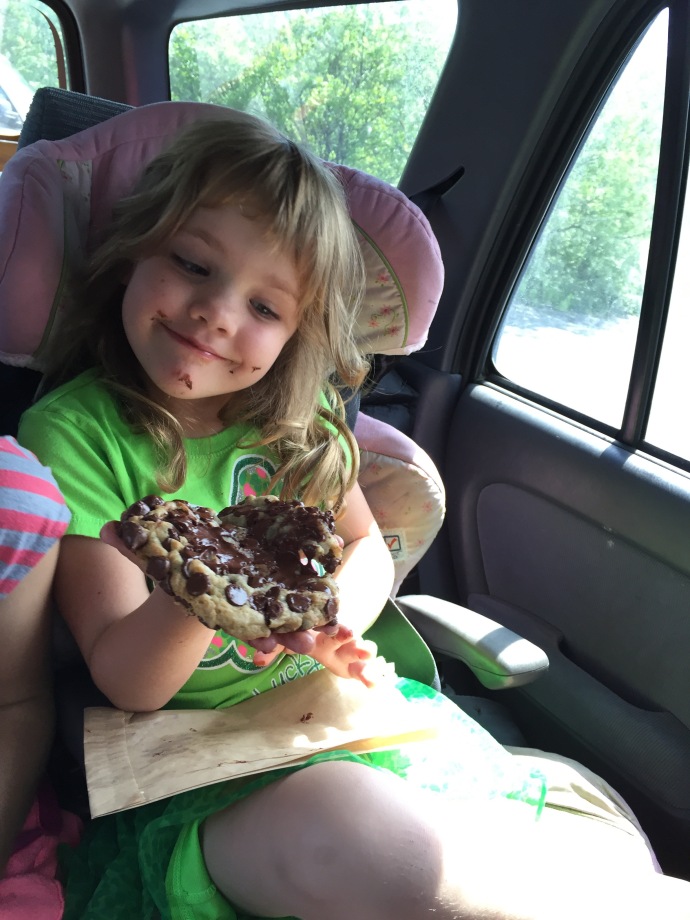 We then drove on until we came to the old WWII runway. 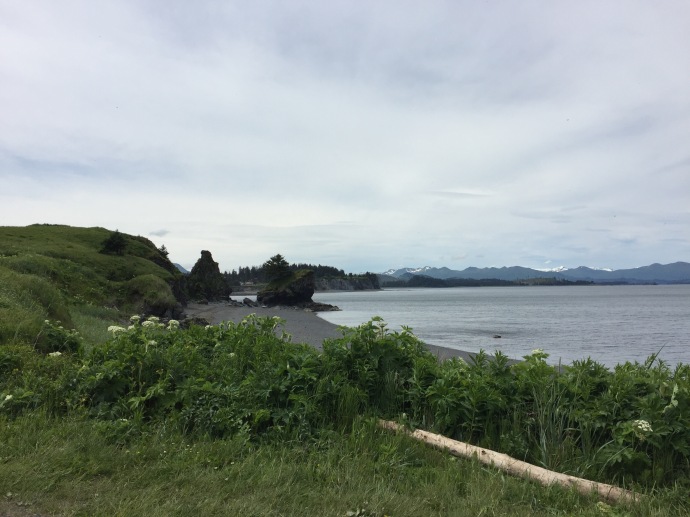 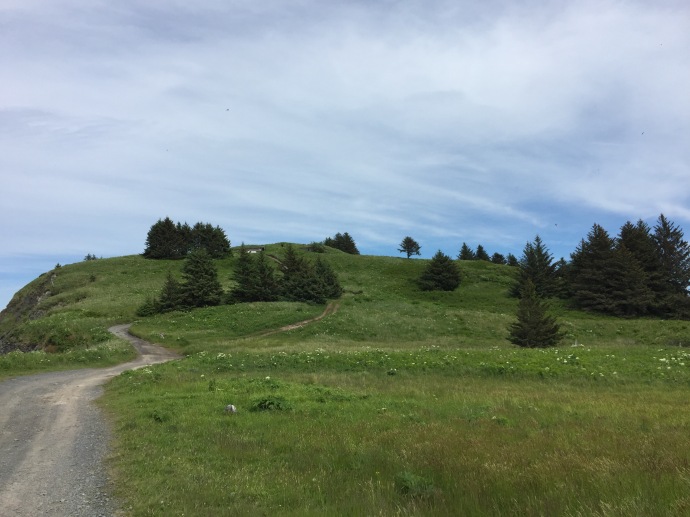 Can you see the bunker up at the top of the hill? 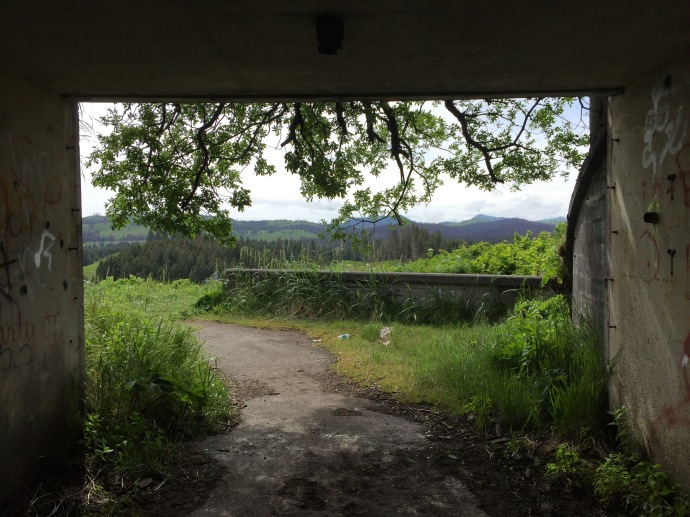 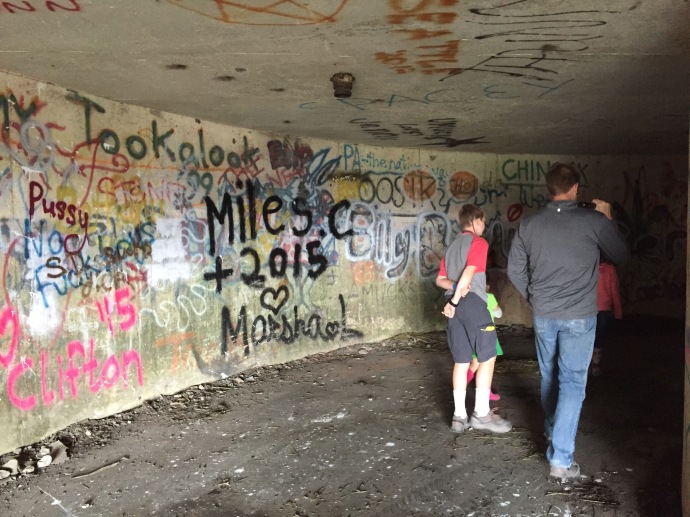 The first bunker was the exact same floor plan as the bunker at Fort Abercrombie’s Military History Museum. 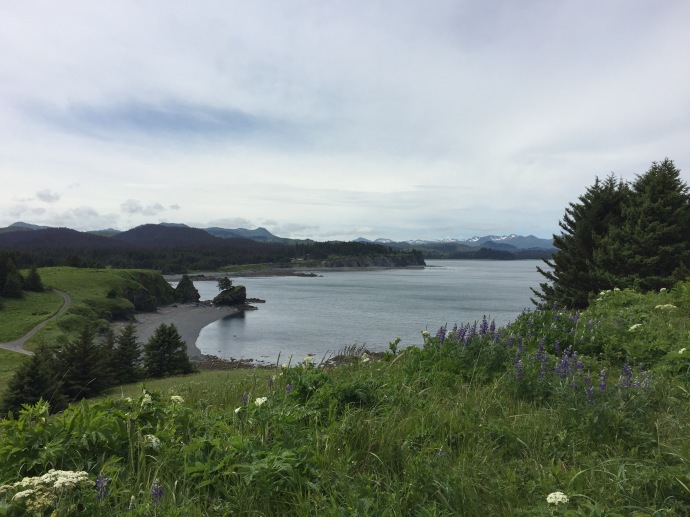 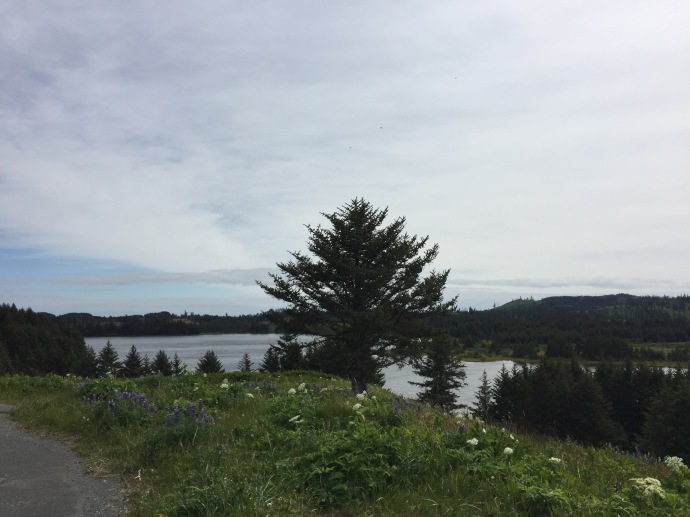 The trail kept going past the bunkers which enticed us to keep walking on.  It lead down to a narrow strip of land separating the lake from the ocean.  We also could see more gun turrets on the next hill up ahead. 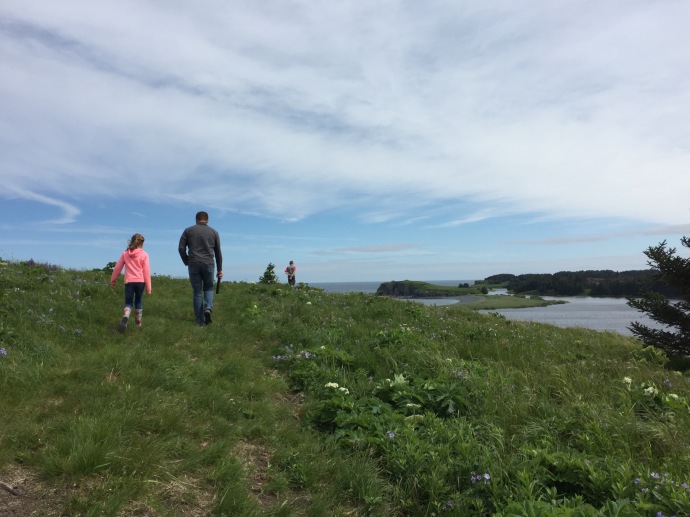 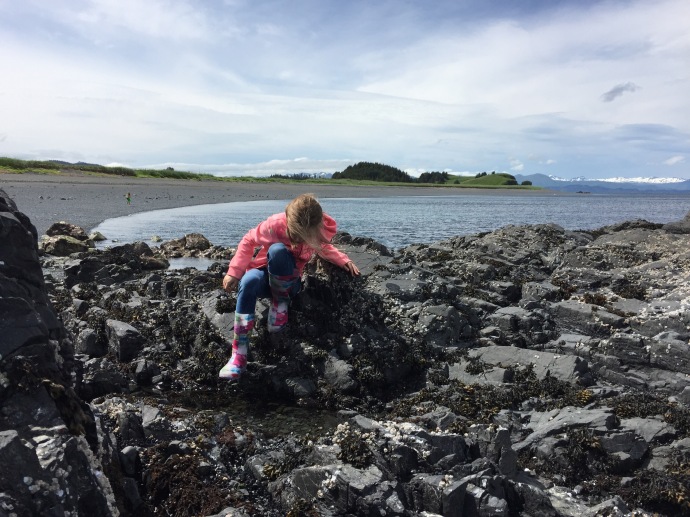 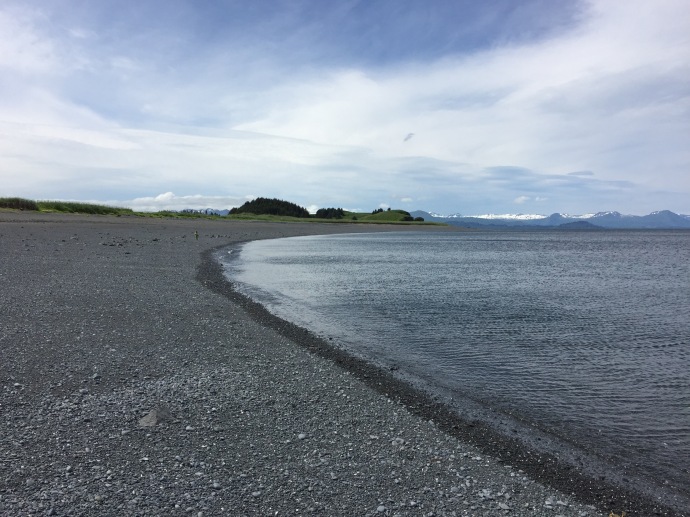 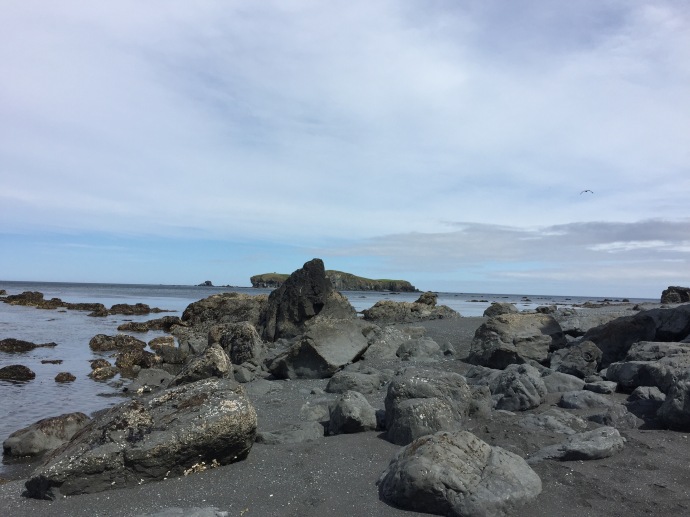 We paused for quite a while to enjoy the beach and tidepools.  These tracks were everywhere on the beach as well.  I’m guessing it is Sitka deer or mountain goat, but most likely deer since we have seen so many deer in this area (none of which were today). 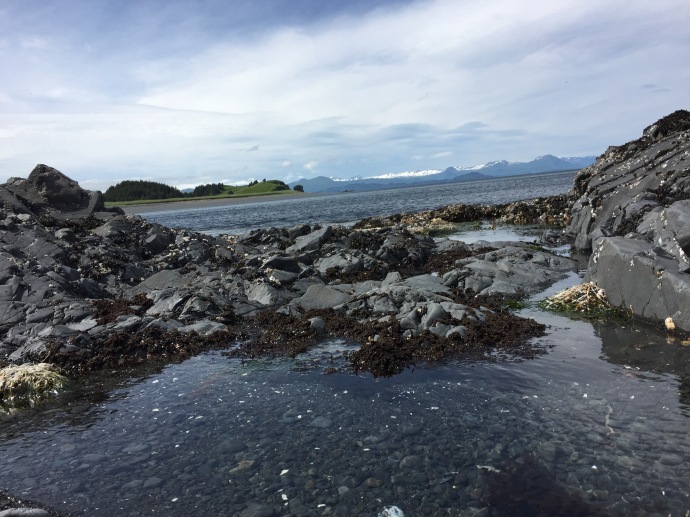 We continued up the hill to check out the gun turrets on top and sure enough it was another bunker like the one on top of diamond head. 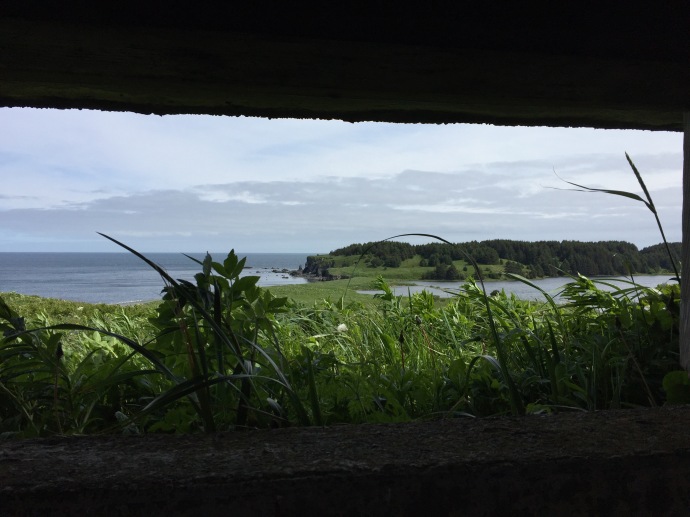 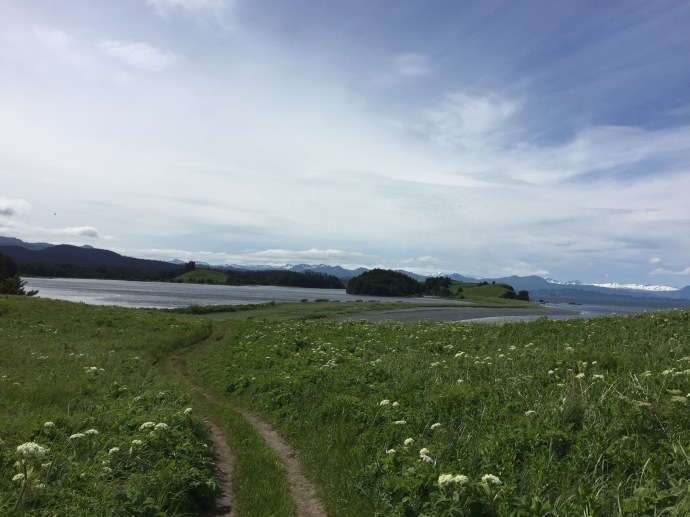 Eve had red marks on her legs and had stepped on a branch of the salmon berries so she was starting to have a rough time so we didn’t continue on.  Next time we will have to make sure she has leggings on so she will have a more fun experience.  On the way back to the car we split ways and the boys walked the beach while we took the road around the back side (lake side of the hill).  We discovered another bunker on top of the first one we checked out so we checked it out as well. 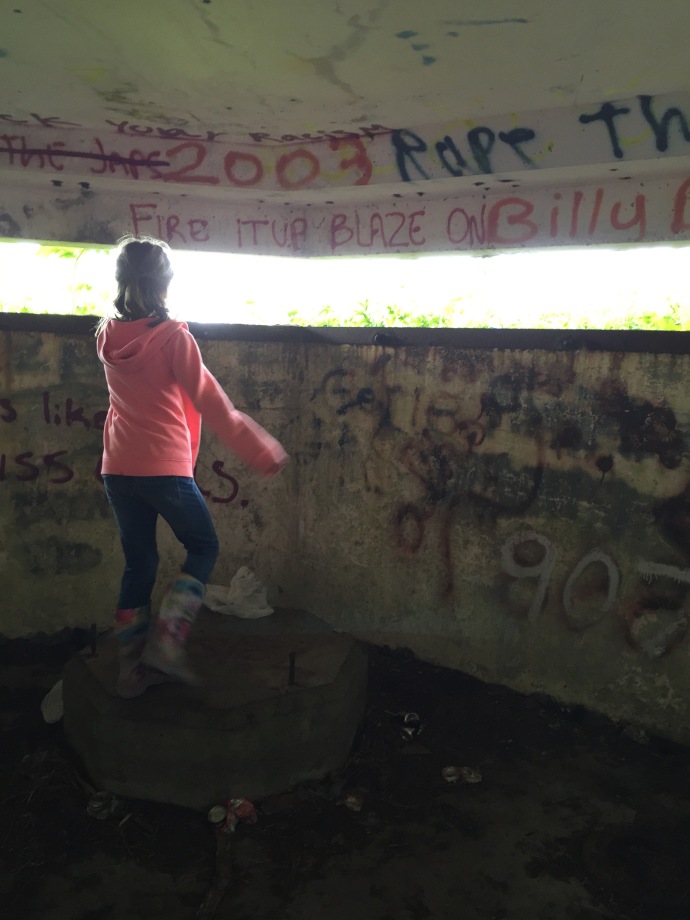 Don’t read the graffiti some of it is pretty bad.  We were keeping our eyes out for drug paraphernalia, needles, broken glass, people you name it.  They are so cool it is sad to see them being used for bad things. 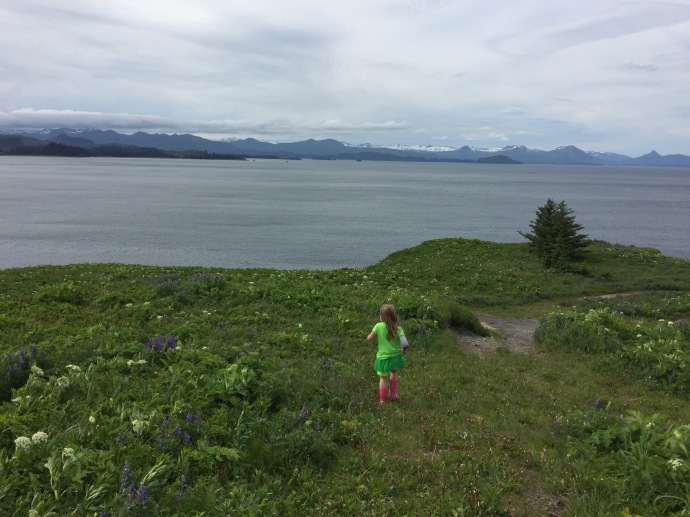 We beat the boys back to the car by a ways so Hannah and I enjoyed he beach while Eve was our watchman.  Although I think Hannah spotted them first. 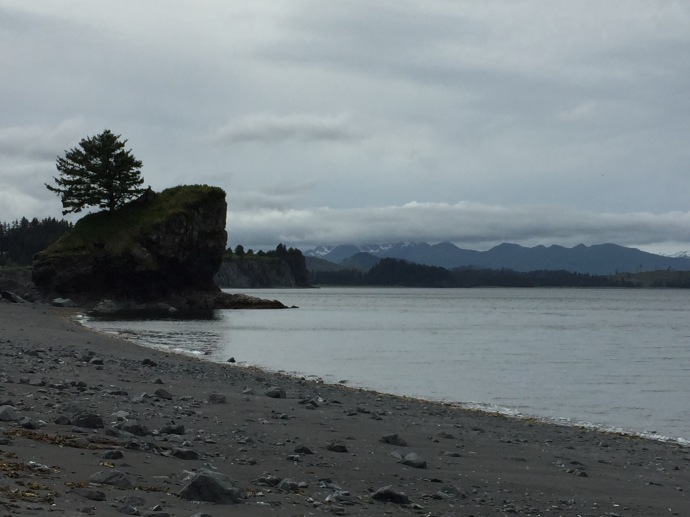 Can you see bright green Eve sitting on the hood of the car? The boys didn’t make it around on the beach and had to backtrack.  I worried about them a little but they were fine.